Ajax sealed a league and cup double with a 4-1 win at De Graafschap as the Eredivisie season drew to... 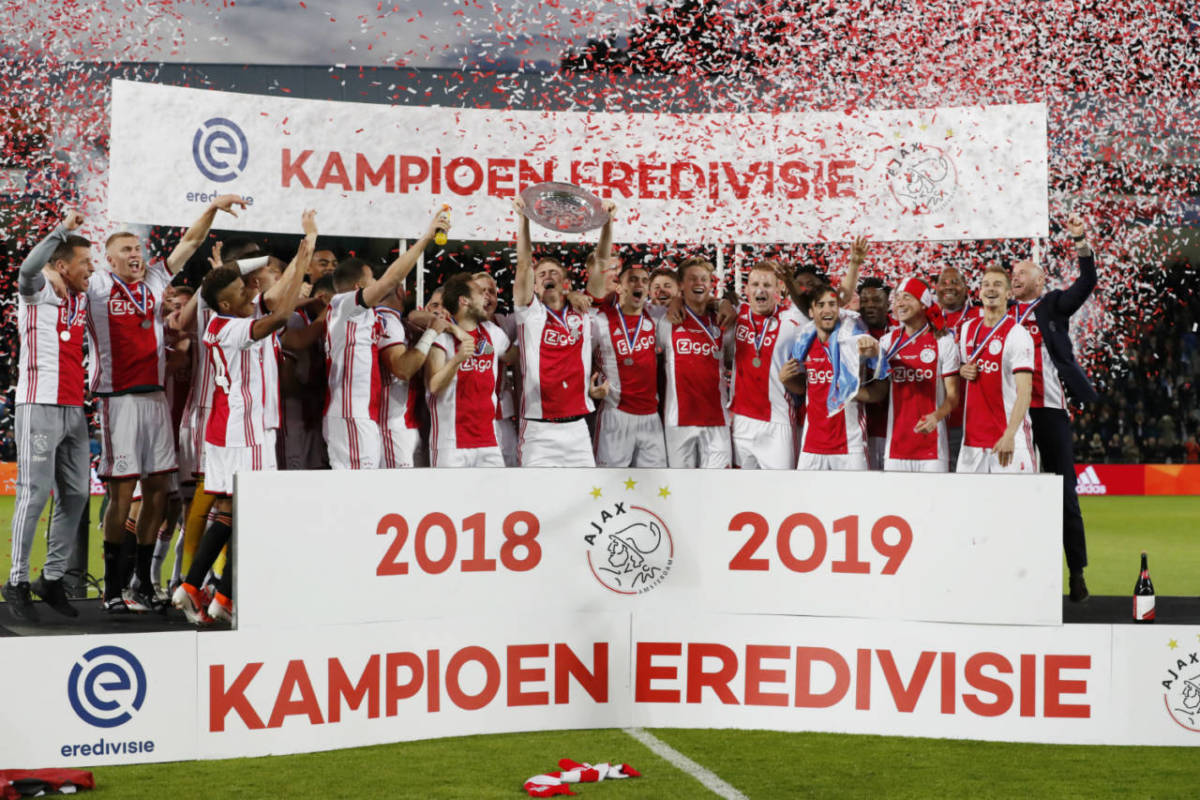 Ajax sealed a league and cup double with a 4-1 win at De Graafschap as the Eredivisie season drew to a close.

The Superboeren made Ajax work hard in the first half, holding out for 37 minutes until Lasse Schöne broke the deadlock with a free-kick.

Matthijs de Ligt became the youngest team captain to lift the Eredivisie trophy in what is likely to be the 19-year-old’s last game for the club. A clutch of top European sides are chasing De Ligt’s signature, headed by Barcelona, who secured midfielder Frenkie de Jong’s services for €85 million in January. Forwards Ziyech and David Neres are also expected to leave in the summer.

At the final whistle Ajax’s players changed into special shirts bearing the number 34 as a tribute to their former team-mate Appie Nouri, who suffered irreversible brain damage two years ago after collapsing on the pitch during a friendly match at Werder Bremen.

PSV’s defeat in Alkmaar on Sunday virtually handed the title to Ajax, and Mark van Bommel’s side looked set for further disappointment as they went behind after just 24 seconds at home to Heracles Almelo.

An own goal by Wout Droste levelled the scores before Nick Viergever and Donyell Malen completed the comeback for PSV, who finished three points behind Ajax.

The only unresolved issue was who would join Utrecht, Heracles and Vitesse Arnhem in the Europa League play-offs. Groningen started the day in pole position but looked set to miss out when they went 1-0 down at Emmen.

Michael Chabon’s goal after 27 minutes handed the advantage to Willem II, who were leading 1-0 at that stage at ADO Den Haag. The Tilburgers were still leading 2-1 with less than half an hour to play, but suffered a late collapse as ADO scored five times to compound an agonising season for the losing cup finalists.

Third-placed Feyenoord rounded off the season with a 4-1 win at Fortuna Sittard, while AZ lost 4-2 at Excelsior, who join De Graafschap in the end of season play-offs. Relegated NAC played out a 0-0 draw with PEC Zwolle in Jaap Stam’s last match as the latter’s coach.

Vitesse Arnhem and Utrecht will both go into the play-offs for the last Europa League place on the back of 3-1 wins, away to VVV Venlo and at home to Heerenveen respectively.