The Hollywood star and bestselling author is becoming a podcaster. He discusses his fight against circumcision, his fear of Harvey Weinstein – and why he is an optimist to the core

His home is cosy: a crowded bookshelf takes up most of the wood-panelled wall behind him; a blown-up cover image of his first children’s novel, The Adventures of Honey & Leon, illustrated by Shaffer, sits on the floor. He flips the camera to reveal a small outside clearing, empty apart from his trampoline, surrounded by maple trees. A porch swing is rocking; he points to a storm on the horizon coming over the Catskills. 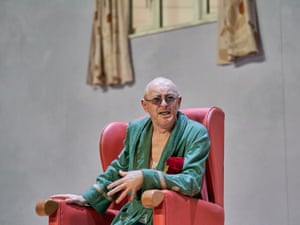 Even if people are more appreciative of the arts during lockdown, it may not be enough to stave off theatre closures. The UK and US governments have always undervalued the arts, he says – a “rot that’s set in” since Margaret Thatcher (he has more than a few criticisms of Thatcher, having just watched the five-part BBC documentary Thatcher: A Very British Revolution).

“Many theatres won’t survive, because there’s so much money going into unemployment and the health service,” he says. “Not only will these theatres not have produced anything or had any income, but there’s going to be a whole range of cuts. We’re all fucked.” It is unclear whether he is referring to thespians or, well, everyone.

One person he does include in his assessment is the US president. “This could be Trump’s downfall. My mother-in-law is a Trump supporter and even she’s said: ‘Oh gosh, it’s terrible what he’s doing, using all the Covid press conferences as a rally.’ It’s insane and embarrassing and just disgusting.”

He will be supporting Joe Biden for president, but he has his reservations. “He’s too old. I think Trump’s too old. But we seem to still be in this culture where old white men seem to be allowed to do anything.”

He has just taken over the pop star Will Young’s role as the co-host, alongside Chris Sweeney, of the Homo Sapiens podcast – in which queer people talk about queer life – which means he can cross off podcaster, albeit reluctantly.

“Everyone has a podcast now!” he says. “It’s like reality TV: I used to say I just wish everyone would go on a reality TV show, so we’ll all have done it and we can get it out of our system and move on.” 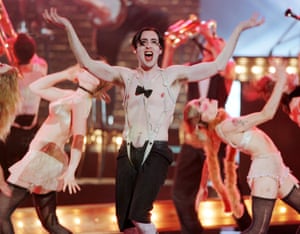 Master of ceremonies ... starring as the Emcee in the 1998 Broadway production of Cabaret, for which he won a Tony. Photograph: Jeff Christensen/Reuters

Yet the lure of exploring one of his biggest passions – icons of the LGBTQ+ community – was too big. Hannah Gadsby and Stephen Fry are just two of the guests on the new series; it also includes an interview with Cynthia Nixon in which she talks about parenting a trans child.

“I still feel everything’s kind of grey,” he says. “It’s never felt complicated, my sexuality. I’ve never had shame about sex in general or homosexuality.” This he attributes to his late father (who died of cancer in 2010), who had an affair with another woman. He wrote about this extensively in his 2014 memoir, Not My Father’s Son.

“Growing up, I saw a man who was unable to control his desire. It made me feel like I’ve got a sexual appetite and it’s not a bad thing. Seeing my father struggle with this and realising that he had no control over it made me feel liberated.”

His father was volatile and violent. He would mentally torment his sons by setting them ambiguous physical tasks around the estate, hitting them when they failed to match his infeasible standards. 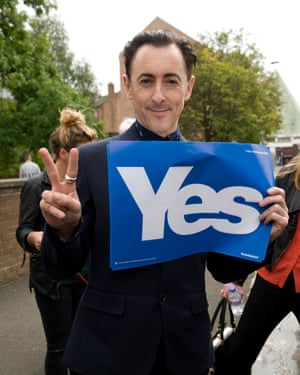 More than five years on, he is still stunned by the feedback from readers of his memoir. Many said it helped them address their own problematic relationships. Has it allowed him to exorcise the trauma of his father’s abuse?

“I thought that maybe I would put him to rest, but actually that hasn’t happened,” he says. “He’s much more in my life than he ever was. And so he should be; he’s my father. Any parent is a huge part of your life and pretending otherwise is not healthy. I feel in a much healthier place with him.”

“I was told that things were not available to me because of my Scottishness,” he says. “America was never a thing. London was maybe a possibility. The idea that I would be doing what I’m doing now or have the opportunities that I have now, there was no one I knew who’d had that trajectory … those things didn’t happen to Scottish people.”

And yet his career boomed. He moved to London after a roaring Edinburgh fringe success as half of the comedy double act Victor and Barry with his friend and co-writer Forbes Masson. Their TV series, The High Life, in which they played a pair of outrageously behaved air stewards, aired on the BBC before Cumming moved to London to play Hamlet at the Donmar under Sam Mendes. He scored an Olivier award for his role as the Maniac in Accidental Death of an Anarchist, as well as a nomination for his performance as the Emcee in Cabaret; he won a Tony award when he reprised the role on Broadway in 1998.

More recently, he has found success on the small screen with his scene-stealing performance as the spin doctor Eli Gold in The Good Wife. In 2018, he landed the starring role in Instinct, the first network drama on US television to feature a gay leading character. 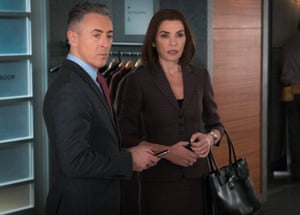 “It shows you how clever those people are,” he says. “There’s a difference between: ‘Oh, he’s a bit of an old lech,’ and being a rapist. That was shocking to me.”

He doesn’t miss a beat as he moves on to the latest battleground for LGBTQ+ people: gender identity. “When people get all weird about people putting pronouns at the end of their emails, I think: ‘Fuck you.’ These people are being kind to you and doing you a favour by telling you how they want to be defined.”

“I never thought anything about my foreskin,” he says, “and then I came to America and I was having sex and people would just be gasping because they’d never seen a foreskin before. I was made to feel weird and freakish because I had an intact body.

“It’s genital mutilation. And I think people say: ‘Oh, that’s hysterical.’ But we do it to girls and it’s called genital mutilation.” As for the religious grounds for circumcision, he believes these are “ridiculous”: “We choose to keep doing some things and we just let the weirdest things go.”

And what about in the immediate aftermath? “I think there will probably be a period of rabid shagging,” he says. “I’m sure there’ll be some sort of swing towards hedonism, where it’s just crazy. It’ll be like New Year’s Eve.”