At least six Rohingya refugees were killed by landslides or drowned in flooding after rain inundated refugee camps in Bangladesh over recent days, deepening the despair among those living there.

Knee-deep waters coursed through the camps, battering fragile shelters made of bamboo and tarpaulin and making at least 5,000 people homeless, according to the UN’s refugee agency (UNHCR).

At least six Rohingya refugees were killed by landslides or drowned in flooding after rain inundated refugee camps in Bangladesh over recent days, deepening the despair among those living there.

Knee-deep waters coursed through the camps, battering fragile shelters made of bamboo and tarpaulin and making at least 5,000 people homeless, according to the UN’s refugee agency (UNHCR).

Three children were killed, including two when their shelter collapsed, a Save the Children spokesperson said.

“They had to flee their shelters with nothing, they just took what they were wearing because the water was flooding so quickly,” said Yasmin Ara, founder of the Rohingya Women Development Forum. “They need some financial support, food and clothes, because they have nothing to wear and also they are not getting medical support.”

UNHCR said emergency teams had been deployed to assess damage and relocate families, while the first responses came from 3,000 trained Rohingya volunteers.

The flooding has affected large parts of the Kutupalong refugee camp, which has existed since the early 1990s but was expanded on uneven, landslide-prone terrain in 2017, when it became the world’s largest refugee camp for the 700,000 Rohingya escaping military massacres in Myanmar, called “genocidal” by the UN.

Campaigners have warned every year that seasonal rains and cyclones in Bangladesh pose a major threat to the refugees, who live in cramped conditions with little protection from the weather and no access to storm shelters.

The Norwegian Refugee Council said 300 landslides had been documented, leaving roads submerged and bridges damaged, and 14,000 refugees living in waterlogged shelters, but that number was likely to increase.

After repeated lockdowns, recent coronavirus outbreaks and a major fire that left 48,000 people homeless in March, there is a sense among refugees that they are being forgotten.

“The responsible people, the site management and NGOs are not working properly. It’s not just one year, this is the previous three years this is happening and we’re facing the same thing again and again,” said Khin Maung, founder of the Rohingya Youth Association. “The last two nights, people can’t sleep. It’s like we’re living in a river, not on land.”

The Rohingya have said they will go back to Myanmar only when their safety is assured and they are given citizenship, but the prospect of a return has seemed even more distant since the military coup in February.

“How much should we Rohingya have to endure? The Rohingya first suffered genocide, then massive fires in the refugee camp, and now massive flooding in Cox’s Bazar. As a refugee, I see my life completely overtaken by shadows,” said Mohammed Nowkhim, a refugee activist. 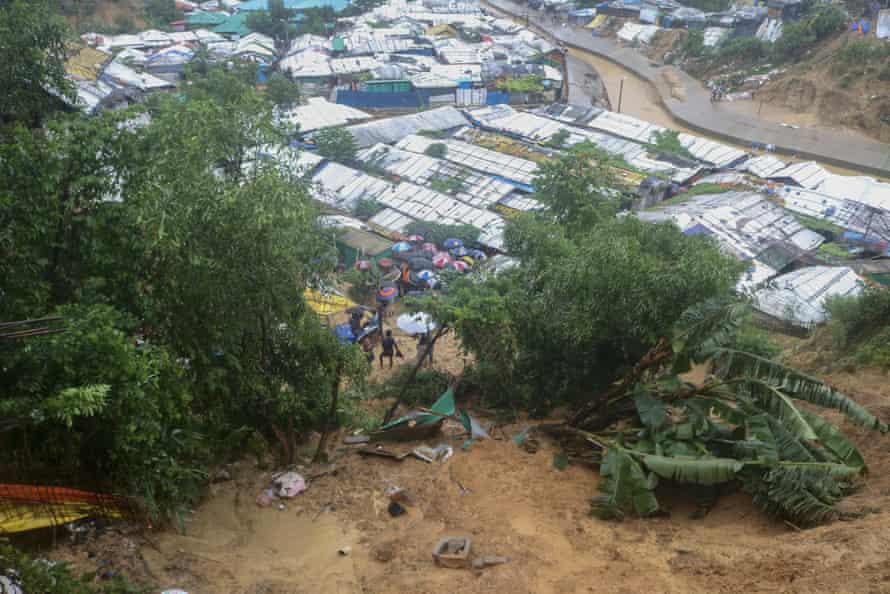 The pandemic has restricted access to the camps but aid work has also been hampered by consecutive years of falling donations, with less than a third of this year’s funding target met.

The UK was accused in May of “abandoning” the Rohingya with a 40% aid cut.

“The floods are a window into how vulnerable refugees, and the community that hosts them, are to a rapidly changing climate. At a time of acute need, funding has continued to decline. Donors, we have been told, are fatigued. The cost of that indifference can be measured in human lives,” said Jamie Munn, director of the Norwegian Refugee Council in Bangladesh.

“Sadly, it is a sign of our times; we are accustomed to conflicts, displacements and the climate crisis cycling through our news and through the attention of the international community, including donors.”