Australia to kill pigeon that survived 13,000km journey from US

Experts suspect the pigeon named Joe hitched a ride on a cargo ship to cross the Pacific Ocean.

Experts suspect the pigeon hitched a ride on a cargo ship to cross the Pacific Ocean.

A racing pigeon survived an extraordinary 13,000-kilometre (8,000-mile) journey in the Pacific Ocean, crossing from the United States to find a new home in Australia.

But authorities now consider the bird a quarantine risk and plan to kill it.

Melbourne resident Kevin Celli-Bird said on Thursday he discovered the exhausted bird in his back yard on December 26. It had disappeared from a race in the US state of Oregon on October 29.

Experts suspect the pigeon that Celli-Bird has named Joe, after the US president-elect, hitched a ride on a cargo ship to cross the Pacific.

Joe’s feat has attracted the attention of the Australian media but also of the notoriously strict Australian Quarantine and Inspection Service.

Celli-Bird said quarantine authorities called him on Thursday to ask him to catch the bird.

“They say if it is from America, they’re concerned about bird diseases,” he said. “They wanted to know if I could help them out. I said, ‘to be honest, I can’t catch it. I can get within 500mm of it and then it moves’.”

The Agriculture Department, which is responsible for biosecurity, said the pigeon was “not permitted to remain in Australia” because it “could compromise Australia’s food security and our wild bird populations”.

“It poses a direct biosecurity risk to Australian birdlife and our poultry industry,” a department statement said. 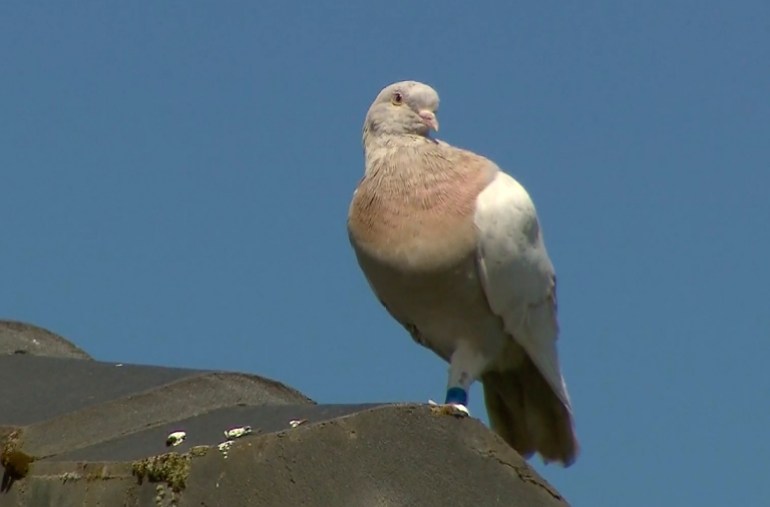 The racing pigeon, first spotted in late December 2020, appears to have made an extraordinary 13,000-kilometre (8,000-mile) the Pacific Ocean crossing from the United States to Australia [Channel 9 via AP]Celli-Bird, who says he has no interest in birds “apart from my last name”, said he could no longer catch the pigeon with his bare hands since it had regained its strength.

He said the Oklahoma-based American Racing Pigeon Union had confirmed Joe was registered to an owner in Montgomery, Alabama.

Celli-Bird said he had attempted to contact the owner but had so far been unable to get through.

It is claimed the greatest long-distance flight recorded by a pigeon is one that started at Arras in France and ended in Saigon, Vietnam, back in 1931. The distance was 11,600km (7,200 miles) and took 24 days.