Nearly three decades after Joe Biden faced sharp backlash over his treatment of Anita Hill, when she came before his Senate committee to accuse Clarence Thomas of sexual harassment, he urged lawmakers not to repeat the same mistakes when considering a sexual assault claim against another supreme court nominee, Brett Kavanaugh, by Christine Blasey Ford.

Nearly three decades after Joe Biden faced sharp backlash over his treatment of Anita Hill, when she came before his Senate committee to accuse Clarence Thomas of sexual harassment, he urged lawmakers not to repeat the same mistakes when considering a sexual assault claim against another supreme court nominee, Brett Kavanaugh, by Christine Blasey Ford.

“It takes enormous courage for a woman to come forward, under the bright lights of millions of people watching, and relive something that happened to her,” Biden said in 2018, as he was laying the groundwork for a presidential run.

Ford, he said, “should be given the benefit of the doubt”.

On Friday, Biden broke a months-long silence to unequivocally deny an allegation of sexual assault by a former Senate aide, Tara Reade. But he was challenged to align his past comments on how such allegations should be viewed with his assertion that Reade’s account was false.

“Are women to be believed … unless it pertains to you?” asked Mika Brzezinski, a host of MSNBC’s Morning Joe.

“Women are to be believed, given the benefit of the doubt,” Biden said.

But he added that “the facts in this case do not exist. They never happened, and there’s so many inconsistencies in what has been said in this case. So yes, look at the facts, and I assure you it did not happen. Period. Period.”

For weeks Biden’s campaign has grappled with how he should defend him while upholding the “believe women” ethos of the #MeToo movement that has toppled powerful men in politics, entertainment and media. Since Donald Trump’s election, Democrats have confronted sexual misconduct aggressively, drawing a sharp distinction with Republicans on issues of gender and equality.

Trump has been accused by more than a dozen women of sexual harassment, assault or rape. During the 2016 election, a recording emerged of him bragging about groping women. Trump has flatly denied the allegations, often attacking his accusers, including for their appearance.

Indeed, on Friday the president advised Biden to “go out and fight it”.

Republicans have largely remained silent about Trump’s record on women. By contrast, Democrats demanded Biden address the matter and some have even called for him to step down as the presumptive nominee.

“Demanding more of Joe Biden’s leadership is not in contradiction with our commitment to defeat Trump,” said Ana Maria Archila, co-executive director of the Center for Popular Democracy. “It is, in fact, central to that effort.”

Republicans have seized on an opportunity to renew the poisonous fight that erupted over Kavanaugh.

“Democrat double standard”, blared a memo from the Republican National Committee which portrayed Democrats as hypocrites and suggested they were holding the allegation against their nominee to a higher standard of proof than the one they used against Kavanaugh.

“The double standard exhibited by Biden, prominent liberal women’s groups and Democrat elected officials – some of whom want to be Biden’s running mate – is glaring and cannot be allowed to stand,” said Erin Perrine, a spokeswoman for Trump’s election campaign. 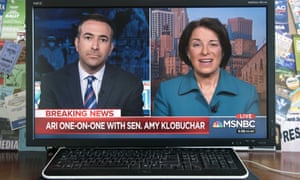 But Karen Finney, who worked for Hillary Clinton’s 2016 campaign, said Republicans were “playing with fire”.

Lis Smith, a senior adviser to Pete Buttigieg’s Democratic presidential campaign, said: “If Republicans and Biden opponents push too hard on this, it will backfire on them and just raise the question of why President Trump has never addressed the scores of sexual misconduct allegations against him.”

Lara Brown, director of the Graduate School of Political Management at George Washington University, said: “In this situation, the calculation that I think most Democrats will make is whatever Biden’s problems are, Trump is worse on every level.”

Brown said accusations of hypocrisy can “hit more than the scandal itself”, particularly when a candidate is attempting to define an opponent. But in this case, she said, the effort to brand Democrats as hypocrites would be undercut by Trump’s record and Republican silence.

Larry Jacobs, director of the Center for the Study of Politics and Governance at the University of Minnesota, said Republicans were attempting to “neutralize” Biden’s appeal to suburban women who revolted from the party in 2018.

But he said the controversy would likely be eclipsed by the economic fallout from the coronavirus outbreak and was unlikely to be a “front-of-mind issue for voters” come November.

Women are a core Democratic constituency. Since Trump’s election, they have organized, voted and run for office in record numbers. In the presidential primary, excitement at the prospect of nominating a woman was eclipsed by fear of losing to Trump. Democrats chose Biden because they believed he was the most electable candidate. He has promised to choose a woman as his running mate.

Biden’s public silence over the last month put top female allies in the position of defending him while validating the experiences of women who come forward. Even so, party leadership and many of the women Biden is considering for vice-president, including senators Amy Klobuchar and Kamala Harris and former Georgia gubernatorial candidate Stacey Abrams, have voiced their support in recent days.

“I have a great comfort level with the situation as I see it,” House Speaker Nancy Pelosi told reporters on Thursday, “with all due respect in the world for any woman who comes forward, with all the highest regard for Joe Biden.” 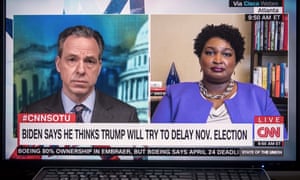 Pelosi said she had “complete respect” for the #MeToo movement but added: “There is also due process, and the fact that Joe Biden is Joe Biden.”

Juanita Broaddrick, who accused Bill Clinton of raping her in 1978, accused Pelosi of being “hypocritical” and “dishonest”.

“‘The fact is that Joe Biden is Joe Biden’,” she wrote on Twitter. “What the hell? Bill Clinton is Bill Clinton, but he’s still a rapist.” Clinton has denied the charge.

In a statement on Friday, Biden pointed to his work in the Senate to pass the Violence Against Women Act, and as vice-president to combat campus sexual assault.

Yet as he was preparing to launch his campaign last year, eight women, including Reade, came forward with stories about unwanted touching or contact. None alleged sexual assault. He apologized but advocates were dismayed when he made light of it days later.

For many sexual assault survivors and advocates, the current controversy has exposed how much still needs to change.

“#MeToo happened and survivors are speaking up more but we still have a lot of people who grew up and accumulated power in the pre-#MeToo world,” said Wagatwe Wanjuki, a writer and anti-rape activist who worked with Biden’s team to shape campus sexual assault policies when he was vice-president.

“Now we’re in this transitionary period where survivors feel more comfortable coming forward but we still don’t have the systems in place for them to come forward in a way that is fair and allows both sides to be heard.”