Now he’s just making it up. 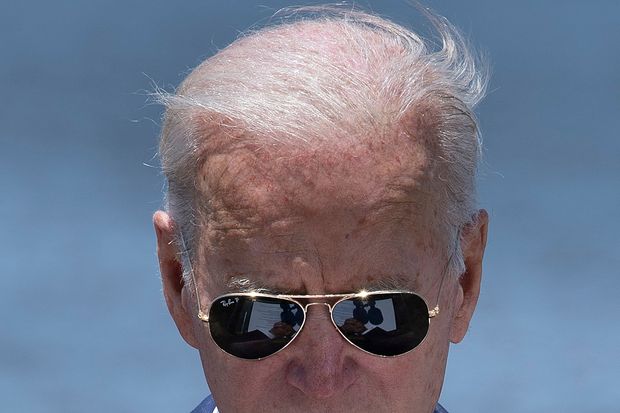 President Joe Biden near the Calcasieu River on Thursday in Westlake, Louisiana.

President Joe Biden’s empty boasts about his economic plan are going to make Americans long for the understatement of Donald Trump. They may already be longing for Trump-era policies on job creation.

One Trump proposal that never came to fruition is nonetheless instructive in demonstrating the modesty of the Trump economic team compared with the Biden braggadocio.

In March of 2018, the Trump White House’s Council of Economic Advisers sketched out a plan and described the likely results:

The President’s plan would likely result in the employment of 290,000 to 414,000 additional infrastructure workers, on average, over a 10-year window, although these employment gains may be offset by losses elsewhere in the economy.

As President, Mr. Trump did implement some valuable regulatory reforms, but never reached an agreement with Congress on new infrastructure spending. Now consider the $2.7 trillion Biden plan, which doesn’t include the Trump regulatory reform agenda and spends far more in total but less on actual infrastructure. On Thursday in Lake Charles, Louisiana President Joe Biden said, according to the official White House transcript:

Everything we’re — we’re gone through is now the, sort of — the blinders have been taken off the American people. They know how bad of shape things are in. But it creates — if we move — all the economists, including the liberal as well as conservative think tanks, point out what we’ll create when we pass this Jobs Plan — we’ll create up to 16 million good-paying jobs. Not $8 an hour or $12, not $15 — prevailing wage jobs. Wages you can raise a family on.

If newspapers still wanted to do “fact-checking” after the Trump era and tried to address all the flaws in this one short paragraph, they’d run out of space for Pinocchios.

A month ago this column noted a Wharton analysis projecting the Biden plan would reduce U.S. wages, hours worked and GDP—significant economic destruction.

Now Mr. Biden is selling the preposterous claim that all economists predict his plan will create 16 million high-wage jobs—nearly 40 times the high end of the Trump White House forecast for infrastructure jobs based on its plan featuring more actual infrastructure, plus deregulation to enable construction.

Given the taxes Mr. Biden has proposed to fund his plan, the real question is how many jobs it will eliminate. Having discouraged workers from taking jobs, Mr. Biden now wants to see how many employers he can discourage from offering them.

Three days after this column asked Dr. Anthony Fauci’s National Institute of Allergy and Infectious Diseases about the coronavirus research it supported at China’s Wuhan Institute of Virology before the Covid outbreak, Team Fauci has responded.

The issue involves “gain-of-function” research, in which scientists genetically engineer viruses to attack humans on the theory that such research will help them learn to counter such threats in the future. One awful possibility is that one of these microscopic monsters was allowed to escape the lab in Wuhan and created the global pandemic. On Friday afternoon this column emailed the following question to the public relations team at Dr. Fauci’s institute:

I am seeing conflicting media accounts on the question of whether the Wuhan Institute of Virology, which received NIAID funding via EcoHealth Alliance, conducted gain-of-function experiments on coronaviruses. Can you tell me whether such work occurred or not?

On Monday afternoon Dr. Fauci’s NIAID, which is part of the federal government’s National Institutes of Health, responded:

EcoHealth Alliance Inc. was the recipient of an NIH grant and made a subaward to the Wuhan Institute of Virology (WIV), as well other [sic] organizations. The research by EcoHealth Alliance, Inc. that NIH funded was for a project that aimed to characterize at the molecular level the function of newly discovered bat spike proteins and naturally occurring pathogens. Molecular characterization examines functions of an organism at the molecular level, in this case a virus and a spike protein, without affecting the environment or development or physiological state of the organism. At no time did NIAID fund gain-of-function research to be conducted at WIV.

When this column inquired again whether the answer to our question was yes or no, NIAID elaborated:

WIV is a Chinese institution which we assume has multiple sources of funding. It is impossible for us to be aware of nor can we account for all of their activities. We anticipate that those activities will be further investigated as stated by [the World Health Organization]. We can only speak to our relationship with them. As stated, at no time did NIAID fund gain-of-function research to be conducted at WIV.

Dr. Fauci’s grantees are permitted to channel money to a Chinese laboratory without anyone on Dr. Fauci’s staff knowing whether the lab is creating deadly new viruses?

James Freeman is the co-author of “The Cost: Trump, China and American Revival.”

(Lisa Rossi helps compile Best of the Web. Thanks to Kathy Reitz.)