Blue Pepper: a second chance to make a first impression

For obvious reasons, I rarely eat at the same restaurant twice – let alone multiple times. When you’re continually under pressure to find new places to write about, it’s not really an option. There are a few notable exceptions (

For obvious reasons, I rarely eat at the same restaurant twice – let alone multiple times. When you’re continually under pressure to find new places to write about, it’s not really an option. There are a few notable exceptions (A-Fusion, Fou Fow, La Perla), but they’re a subject for another post. So it had been an entire decade since I’d last been to Indonesian restaurant Blue Pepper by the time they invited me for dinner there. I looked back at the review I’d written at the time, discovered that they’d made some significant changes over the intervening years, and decided it was high time I gave them another try.

And I was glad that I did. Blue Pepper is essentially serving a fine-dining-meets-rijsttafel version of Indonesian food. Which could be ideal if you have a client you need to impress, or it’s your dad’s birthday. That’s not to say that the atmosphere is stuffy or pretentious, but the service is a cut above your regular Amsterdam restaurant, the presentation of the food is a notch fancier, and you can order paired wines with everything. I’ve seen this before at Mama Makan, and the flavour suffered as a consequence. But at Blue Pepper, you’ll still find the punchy flavours and chilli kicks you’d expect from the best Indonesian food. 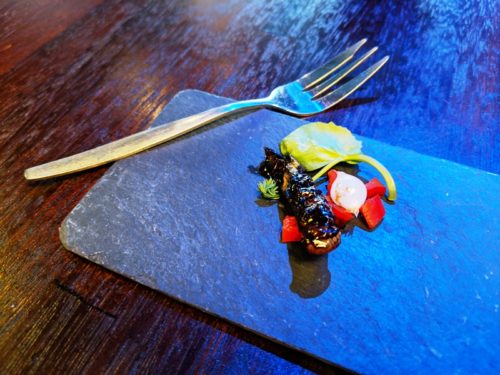 Now that I’ve totally spoiler-ed my own review, what did we eat? Grasshoppers, for one. Blue Pepper’s amuse-bouche was the second time I’ve eaten a grasshopper (the first time being at Rollende Keukens a couple of years back) and I can confirm that this was an improvement. It probably had a lot to do with the kering sauce (which tasted much like ketjap manis) that would make any insect taste like a crunchy, sweet, umami snack.

Blue Pepper has opted to serve their rijsttafel in courses, rather than plonking everything on the table at once. Of course, that changes the pace of the meal – which could be good or bad depending on your preference. But it also allows you to savour each item individually, to pair wines accordingly, and (let’s be honest) to charge more. So our first proper course was a scallop with orange, macadamia nuts and samphire. Uncharacteristically delicate for Indonesian food, but no less sweet and delicious for it – especially when served with a glass of Prosecco. 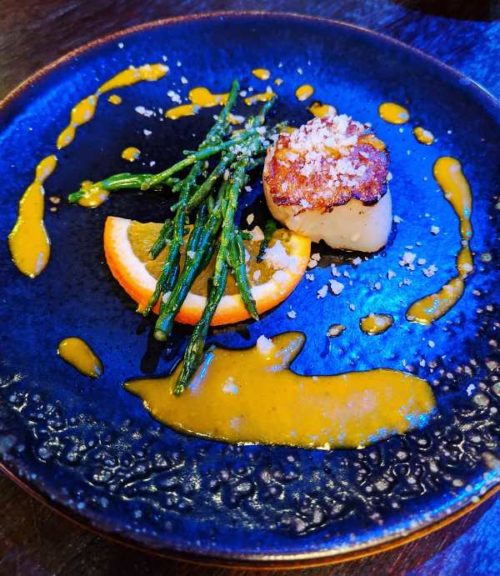 Scallop with orange, macadamia and samphire

The second course comprised three mini-dishes in one: a pulled-goose fried spring roll with a sauce fragrant from cloves and cinnamon; a palate-cleansing fruit combo of pineapple, mango and cucumber with a sweet sauce; and a spicy guinea-fowl curry that was pleasantly hot on the tongue. It was, admittedly, a little hard to tell that the goose wasn’t duck, and the guinea fowl not plain old chicken, but I appreciated the restaurant’s attempts to win people over to lesser-used ingredients.

With the satay course, we were back in more familiar territory. Chicken satay came with the requisite peanut sauce, while lamb satay came with a soy-based sauce. New for me was curried jackfruit satay, which I’ve had before disguised as pulled pork but never stuck onto a satay skewer. It was pleasant enough, but I doubt I’ll ever become jackfruit’s biggest fan. 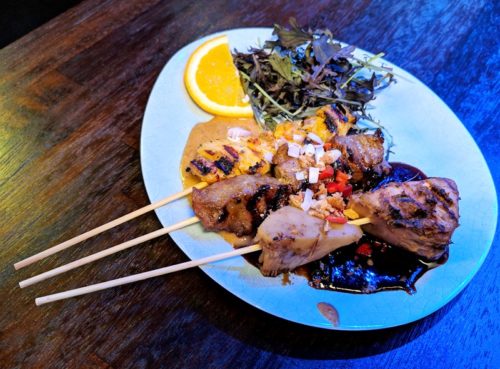 Next came a rather more traditional selection of four rijsttafel dishes: spicy prawns, beef rendang, gado-gado and pickled vegetables. The prawns were so good we ended up ordering seconds, while the rendang was so melt-in-the-mouth it could have been made with beef cheek. This may be regular rijsttafel fare, but the quality is still impressive.

I’m never big on Asian desserts (or desserts in general, for that matter), but the sweet course at Blue Pepper was worth my risking a sugar crash. First, we were instructed to eat what looked like a tiny yellow flower. Five seconds later, I felt like my mouth had been woken up by a lightning bolt. It made the combination of orange-blossom sorbet, mango panna cotta and forest berries all the fruitier. 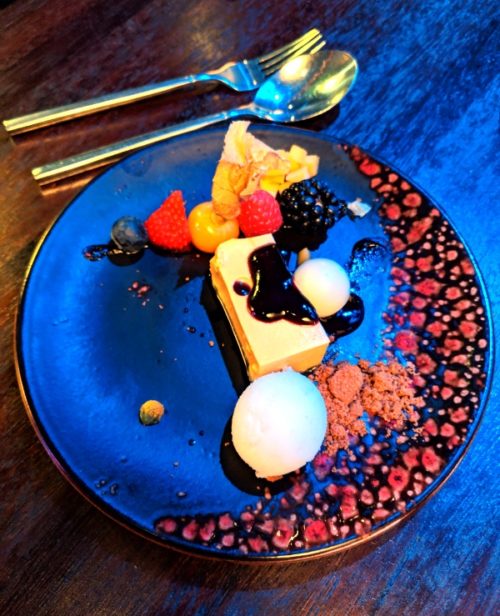 Had we been paying, dinner would’ve cost €57.50 for five courses, plus €31 for the wine pairings. Admittedly, a €90 dinner is not something you’re going to indulge in every night. But for a special occasion – especially for those seeking an upscale Indonesian experience in Amsterdam – I think it’s worth the price tag. And for me, it was definitely worth giving Blue Pepper a second chance to make a first impression…