A police raid on a floating crystal meth laboratory in the Dutch port of Moerdijk has been scuppered after the 85-metre (280ft) boat suddenly began to sink, in what is believed to have been a remotely operated attempt to destroy evidence.

Police forensic experts had to swiftly disembark when the cargo ship, containing methamphetamine oil with a street value of more than €4.5m (£3.9m), started rapidly taking on water just after midnight on Saturday.

“The water flowed in at a rapid pace,” a police spokesman said. “The employees of the various emergency services had to stop their work and leave the boat.

“Investigation showed that a kind of booby trap had been put into operation. A pump was presumably turned on remotely, which could sink the boat.”

In an attempt to prevent chemicals and fuel from entering the water, the infrastructure and water management ministry erected a screen around the ship, which had sunk by about 1.5 metres before being stabilised.

“When the pump suddenly stopped, the emergency services regained control of the situation, and the danger of sinking and pollution had passed,” the spokesman said. “Fortunately, a large amount of trace evidence and valuables had already been secured.”

Police seized more than 300 litres of methamphetamine oil from the German-registered boat, which had been discovered during a routine police check at the port, 25 miles (40km) south of Rotterdam.

During the initial search at lunchtime on Friday, one police officer became unwell on the ship after inhaling chemicals, and was treated in hospital.

The ship’s 65-year-old captain, from Breda, and three other men aged 23, 26 and 37, from Mexico, who were on the boat at the time of the discovery, were arrested. A car with a German number plate was also seized.

The cargo ship had been partitioned to create rooms. A police spokesman said drug waste and pans for cooking the substance were discovered along with seven kilos of “unstable” raw materials that had to be taken away and safely destroyed. 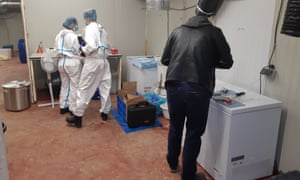 Forensic investigators onboard the 85-metre vessel, which was registered in Germany. Photograph: Roosendaal police/Twitter

“The discovery of this drug laboratory is unique in the Netherlands: it is the first time that a drug lab has been found in a cargo ship,” the spokesman said. “The boat is at least 80 metres long. More often, hemp farms are found in ships, also a drug lab in a houseboat, but never a drug lab in such a large ship.”

Drug gangs, which have previously concentrated on ecstasy and amphetamines, are said to be increasingly moving into the production of methamphetamine, known as crystal meth due to its colourless and odourless solid form.

In 2014, Europol warned of the growing hold of Mexican cartels on European production and distribution of illegal drugs. The previous year, José Rodrigo Aréchiga Gamboa, from the Sinaloa cartel, was arrested at Schiphol airport in Amsterdam.

The use of crystal meth is believed to be on the rise in the Netherlands, but the country is also a distribution centre for exports in particular to Germany and the Czech Republic.

Large hauls of the drug were discovered in January and July last year in Rotterdam, a key hub for cartels due to the ability to bring in raw materials through the port.