Report recommends president's indictment for crimes related to his handling of pandemic that left over 600,000 dead.

Report recommends that president be indicted for nine crimes related to his handling of the pandemic that killed more than 600,000 people.

A Brazilian Senate investigative committee has approved a report that calls for President Jair Bolsonaro to be indicted for nine crimes related to his handling of the coronavirus pandemic, including crimes against humanity.

Tuesday’s report, which is more than 1,300 pages long and took the opposition-controlled committee about six months to prepare, also alleges that 77 additional people and two companies committed crimes.

A draft report released last week had called for Bolsonaro to be indicted for genocide and murder, but senators later decided to drop those particular charges due to what lawmakers described as technical reasons. They also decided to add 10 people to the list of individuals who should be indicted.

Among the people added was Wilson Lima, the governor of interior Amazonas state, where a lack of hospital oxygen supplies resulted in deaths by asphyxia earlier this year. His government is currently under federal investigation for alleged corruption related to the purchase of medical equipment.

“The chaos of Jair Bolsonaro’s government will enter history as the lowest level of human destitution,” said Senator Renan Calheiros, rapporteur of the report, adding that the president was “on the side” of dictators, including Adolf Hitler and Augusto Pinochet.

Bolsonaro’s press office did not immediately respond to a request for comment on Tuesday night.

But Sen Flávio Bolsonaro, one of the president’s sons, called the report legally weak and politically motivated.

“The intent of some senators on the investigative committee is to cause the maximum amount of wear and tear on the president,” he told journalists.

Lima also dismissed the inclusion of his name as political posturing.

“Putting my name in the final report has a motivation that is totally political and electoral,” Lima said in a statement provided by his press office. “I wasn’t even investigated by the committee.”

The president has denied wrongdoing, and the decision on whether to file most of the charges will be up to Prosecutor-General Augusto Aras, a Bolsonaro appointee who is widely viewed as protecting him.

Sen Omar Aziz, the chairman of the inquiry, said he would deliver the recommendation to the prosecutor-general on Wednesday morning. Aras’ office said the report would be carefully reviewed as soon as it is received. 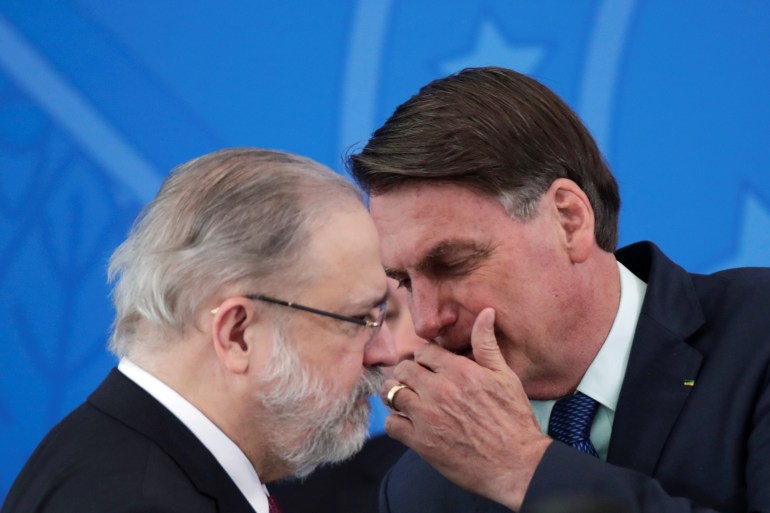 Regardless of whether charges are filed, the report is expected to fuel criticism of the divisive president, whose approval ratings have slumped ahead of his 2022 reelection campaign – in large part because of Brazil’s outsize COVID-19 death toll of at least 600,000 people.

The investigation itself has for months provided a drumbeat of damaging allegations.

Since the start of the pandemic, Bolsonaro has sabotaged local leaders’ restrictions on activity aimed at stopping the virus’ spread, saying the economy needed to keep humming so the poor did not suffer worse hardship. He also has insistently touted an anti-malaria drug long after broad testing showed it isn’t effective against COVID-19, assembled crowds without wearing masks and sowed doubt about vaccines.

The president has previously dismissed the Senate investigation as a “joke.”

Still, the report highlights the right-wing leader’s increasing isolation heading into an election year. His popularity is already flagging due to his handling of the pandemic and stubbornly high inflation.