A 72-year-old man from Leicester is set to become the oldest person in the world to row the Atlantic solo when he docks in Antigua this week, after a three-month voyage.

It was Graham Walters’ fifth journey across the ocean – his third solo – and relatively plain sailing despite a few scary moments.

A 72-year-old man from Leicester is set to become the oldest person in the world to row the Atlantic solo when he docks in Antigua this week, after a three-month voyage.

It was Graham Walters’ fifth journey across the ocean – his third solo – and relatively plain sailing despite a few scary moments.

Speaking via satellite phone off the coast of Antigua, Walters said: “I fell through the deck and had to repair it all, and there were four leaks I had to contain all the way along.

“I also didn’t realise how cold it is to start with. I got drenched in the first week and was quite cold.”

Walters also nearly faced catastrophe when his electronic water maker failed; luckily he found a manual water pump buried in his supplies, which was able to produce half a litre of water when pumped for 50 minutes.

But there were also moments of joy, such as when a curious youngster from a pod of minke whales played around the boat for hours. “It was jumping, twisting and turning, it was amazing,” Walters said.

A carpenter by trade, he made the crossing in a 22-year-old row boat he built in his front garden for the first ever Atlantic rowing race in 1997 and named it the George Geary after his late grandfather, the first-class cricketer. 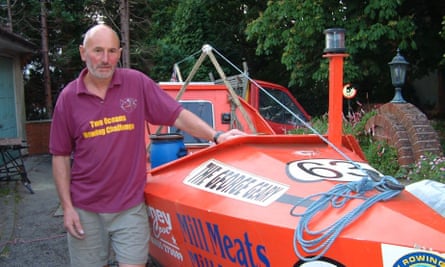 Graham and George Geary, a 22-year-old row boat he built in his garden. Photograph: Help for Heroes

“I worried to start with when the waves were quite big; they were over three metres and he was being thrown around the boat,” said Walters’ wife, Jean. “And I worried whether the boat could handle it because it is old. But Graham was very upbeat, and he’s a very determined individual.”

The boat was able to house all the supplies needed for the journey of over 3,000 miles, including dozens of boil in the bag meals, a rubber dinghy for cleaning barnacles off the boat and collecting rainwater, and solar panels to generate electricity.

He used the journey to raise money for Help for Heroes, a cause close to his heart after he came to the aid of several veterans supported by the charity who were taking part in an Atlantic rowing race a few years ago.

“While I fixed their boat, I got to know them really well, and I was amazed how well they got on with things because they were all amputees,” he said. “That’s what started it off.”

Walters was due to dock in Antigua on Wednesday, but after winds blew him off course at the last minute, his arrival was delayed. It will be a long-anticipated landing, as he hasn’t seen another human in months, and the world is a very different place to the one he left behind in Gran Canaria on 25 January when he set sail.

While Jean has been giving him updates on the coronavirus pandemic, Walters admits he doesn’t know what to expect. “It’s hard to comprehend for me out here what’s been happening,” he said. “Until I get back, I haven’t a clue what life is going to be like.”

But that in itself is going to be a challenge. Although boats are currently banned from docking on the island, a special dispensation has been made for Walters, and he now faces a stint in quarantine and potentially a long wait before he can catch a flight home. “I’ve caused a bit of an international incident,” Walters said.

Once adjudicated by the Ocean Rowing Society, Walters will claim the Guinness World Record for the oldest solo Atlantic rower, currently held by Gerard Marie of France who completed the solo challenge in 2015, aged 66.

After what Walters dubbed his “last voyage”, he plans to leave the George Geary in a museum in Antigua.

“It sounds like a sad occasion but I would say grand finale might be nearer the point, for me and for the boat,” he said. “For me it’s to show life has not passed me by.”