California closes Orange county beaches over Covid-19 fears – but how risky is a beach day?

Photos of packed beaches in southern California made headlines around the United States this week, prompting a furious state governor to order all beaches in Orange county closed this weekend.

Gavin Newsom announced Thursday that the closures would only apply to the county, which saw the largest crowds, and that he hoped it wouldn’t last long. Other counties have reopened with limits, and will continue to do so.

Photos of packed beaches in southern California made headlines around the United States this week, prompting a furious state governor to order all beaches in Orange county closed this weekend.

Gavin Newsom announced Thursday that the closures would only apply to the county, which saw the largest crowds, and that he hoped it wouldn’t last long. Other counties have reopened with limits, and will continue to do so.

But what are the true risks of coronavirus infections at the beach? There’s no simple answer, but public health experts and epidemiologists told the Guardian that some of the backlash and concern may be unwarranted. As some local counties have criticized the statewide closures, the scientists also argued that there could be safe ways to allow access – and that there may be benefits to reopening.

Could massive crowds at the beaches lead to an increase in cases, reversing California’s progress on Covid-19?

Andrew Noymer, public health professor at the University of California, Irvine, said he too initially cringed at last weekend’s photos, but noticed upon looking closer that most people sitting together could have been from the same household and there was some distance between groups. “I’m not really in a scold mode,” he said. California will know in five to 10 days whether the beach groups caused an uptick in cases, and the state should monitor this closely, Noymer added. “I’m not that concerned that we’re going to see absolutely major spikes,” he said.

Michael Buchmeier, UC Irvine professor of medicine and infectious disease expert, noted that some of the gatherings last weekend did appear to be quite dense. He said the main concern is that asymptomatic carriers could be at the beach spreading the virus, predicting there is a 50/50 chance the recent beach crowds could lead to a “blip” in cases. 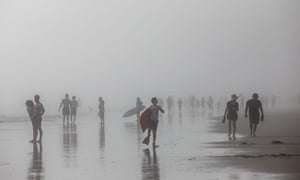 What would be the risk of going to the beach right now?

If the beaches reopen, visiting them would not be not without risk, and Noymer advises people who are medically vulnerable or elderly not to go. Sitting on the sand, however, does not carry risks of catching the virus, he said, if groups station their towels and umbrellas more than 6ft apart. The risks are much greater if people end up waiting in lines to buy food or use the bathroom or if they wade in the water within 6ft of others.

The risk of a beach visit, Buchmeier said, is somewhat comparable to a trip to the grocery store.

Is it safe to swim in the ocean?

“If you’re swimming more than 6ft away from people, you’re probably reasonably safe,” said Buchmeier. He noted there were still unknowns about Covid-19 and the ocean, but that the virus would probably struggle to survive in the seawater because of factors including UV light penetrating the water, tide activation, the salt content in the ocean and organisms ingesting the virus. Covid-19 primarily spreads through person-to-person contact.

Does sunlight kill the virus at the beach?

“The virus is very sensitive to ultraviolet light and very sensitive to heating. It’s not likely to survive in heat and sunlight,” said Buchmeier, who is also a molecular biology and biochemistry professor. He noted that in some hot climates, health clinics put medical instruments in the sun to decontaminate them.

Sunlight cannot, however, kill the virus “inside the body”, as Donald Trump floated last week. Noymer said UV was not a “cure-all” and something of a “wild card” since scientists don’t know its precise impacts, but that the evidence suggests it puts a “damper on the spread of these respiratory viruses”. Because of the sunlight at the beach, he added: “I’m hard pressed to find a better example of something that could be restarted than the beaches.”

Newport Beach lawmakers want to reopen its beach. How should governments decide when to open theirs?

Wendy Parmet, a Northeastern University health policy expert, said governments need to consider “harm reduction” when weighing the costs of reopening: “We are never going to get social interactions to zero, so how do we reduce the ones that are high risk?” California needs to avoid the complete “renormalization of social interaction”, but the state must reckon with the “quarantine fatigue” that many are feeling, she said.

The answer could be to start permitting more outdoor activities: “If allowing people to have access to sunshine and recreation is what’s going to keep them from protesting and violating laws, that may be a trade-off worth making,” said Parmet. A beach gathering is safer than an indoor party, for example.

Noymer said it was critical that governments reopen in phases, suggesting that there should be at least 10-day delays between big changes so that officials can monitor impacts: “The era of lockdowns is ending, and the era of trade-offs is beginning. People aren’t going to shelter in place for 15 months. I would rather see crowded beaches than a crowded indoor shopping mall.” 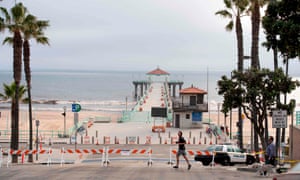 Could restrictions offer a solution?

Buchmeier suggested governments consider controlling the number of people at the beach and find ways to ensure that there is plenty of space for people to remain distant.

There are, however, major equity issues that arise with restrictions, noted Lucas Zucker, environmental justice advocate with the Central Coast Alliance United for a Sustainable Economy. Some counties have allowed recreational activities such as surfing and jogging, but barred picnics and sunbathing. This could unfairly hurt larger families who live in crowded households and are seeking an escape to the outdoors. Zucker also argued that policies that close parking lots are restricting access for lower-income communities of color who live more inland: “How do you meet the goal of limiting the density of people attending the beach without saying that people who have means to live near the beach are able to go, but the people who don’t can’t?”

Could beaches remain closed as we head into summer?

He added that the crisis was exposing everyone to the kind of challenges that have long plagued lower-income neighborhoods without adequate public spaces: “The panic we’re seeing is because more affluent communities are getting a taste of what working-class communities of color have dealt with for generations.”

Noymer said it no longer seemed realistic to do long-term closures: “The genie is out of the bottle now. People are going to see the photographs, and they are going to go to the beach on hot days.”

'What not to do': governor Newsom condemns California beach crowds – video
Source: https://www.theguardian.com/us-news/2020/apr/30/california-beaches-closed-coronavirus-risks-experts
(0)
0.0
Dislike 0
ОТН 190
Like 0
Someone is typing...