China is gearing up for its first national holiday after months of lockdowns, with authorities lowering the emergency response level for Beijing just in time to allow freer travel.

On Wednesday, authorities announced a downgrade of the emergency response level governing Hebei province and the municipalities of Beijing and Tianjin, from Thursday.

China is gearing up for its first national holiday after months of lockdowns, with authorities lowering the emergency response level for Beijing just in time to allow freer travel.

On Wednesday, authorities announced a downgrade of the emergency response level governing Hebei province and the municipalities of Beijing and Tianjin, from Thursday.

The measures will allow tens of millions of people to leave their cities without having to undergo 14 days of strict home quarantine on their return.

Arrivals from low-risk areas of China also no longer need to complete two weeks’ home isolation in Beijing, and anyone from those areas currently in quarantine, either at home or in facilities, can stop on Thursday, reported the official state media agency, Xinhua.

Quarantine obligations still apply to arrivals from overseas, Hubei province, and other medium to high-risk areas.

The relaxation comes on the eve of the five-day national Labour Day holiday, and triggered an immediate jump in tourism-related bookings, although numbers were still well below the same period last year.

The Chinese ministry of transport said it expected 117 million people to travel during the holiday.

According to the Chinese travel booking app Qunar, within 30 minutes of the announcement of Beijing’s emergency downgrade, flight bookings for leaving the city rose by 15 times previous levels, with people mostly heading to Chengdu, Chongqing, Shanghai, Hangzhou and Changsha.

Authorities also reopened the Forbidden City in Beijing for the first time since the lockdown, to a reduced number of 5,000 visitors per day. Within 12 hours of going on sale, tickets for all five days of the holiday had sold out.

The rush to travel out of Beijing reflected China’s belief that it has at least begun to get the outbreak under control. However, a foreign ministry spokesperson, Chen Bei, said the risk of new cases as a result of the rush of movement “should not be underestimated”.

On the afternoon before Labour Day there were more people in Beijing’s commercial centre than usual, and more shops open. Everyone kept their masks on in the 30C (86F) heat. But while it was the first day of a little more freedom for some residents, not all were ready to start travelling so soon. 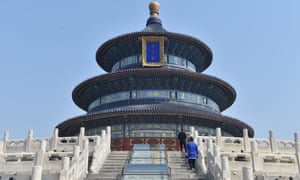 Visitors return to the Temple of Heaven in Beijing after it reopened. Photograph: Xinhua/Rex/Shutterstock

One 19-year-old student, with the surname Wang, said he had not travelled since summer last year and would be staying home this weekend.

“I think I will stay put for three or four more months before considering making any travel plans, and even now I don’t go out much, only occasionally to get some fresh air,” Wang said.

“I think it’s still safer to stay home more and slowly increase the time that I head out.”

Another couple said they had no plans to travel. “I hope the situation will be better in October, at that time I might consider travelling,” the woman said.

On Wednesday, China’s national health commission reported just four new cases in the country, all of which it said were imported. It reported 33 new cases of asymptomatic infections, including two imported cases.

The capital did not record as many infections as other cities such as Wuhan in the first few months of the outbreak, but the city was the hardest hit in China by imported cases, when people began returning in droves from overseas. In March, partial lockdown restrictions on Beijing were tightened, including the diversion of all international flights to other cities so passengers could undergo health checks before being allowed to travel on.

Not long after, restrictions were lifted in Wuhan and other regions, but Beijing stayed under strict measures.