Colombia is bracing for further unrest after a weekend in which largely peaceful nationwide demonstrations were met with a violent police reaction which left at least 16 demonstrators and one police officer dead and hundreds injured.

Videos shared on social media over the weekend showed police firing at protesters sometimes from close range, ramming crowds with motorcycles, and bashing demonstrators with their shields.

Colombia is bracing for further unrest after a weekend in which largely peaceful nationwide demonstrations were met with a violent police reaction which left at least 16 demonstrators and one police officer dead and hundreds injured.

Videos shared on social media over the weekend showed police firing at protesters sometimes from close range, ramming crowds with motorcycles, and bashing demonstrators with their shields.

The drama of the weekend was encapsulated in a shocking TV news clip in which a live shot of the central city of Ibagué captured the moment in which a woman learnt that her 19-year-old son had died after being shot by police. “Kill me too, they also killed me,” she cried. “He was my only son!”

The demonstrations began with a general strike last Wednesday over an unpopular tax reform but quickly escalated when protesters were met by riot police armed with teargas, bean-bag rounds and billy clubs. 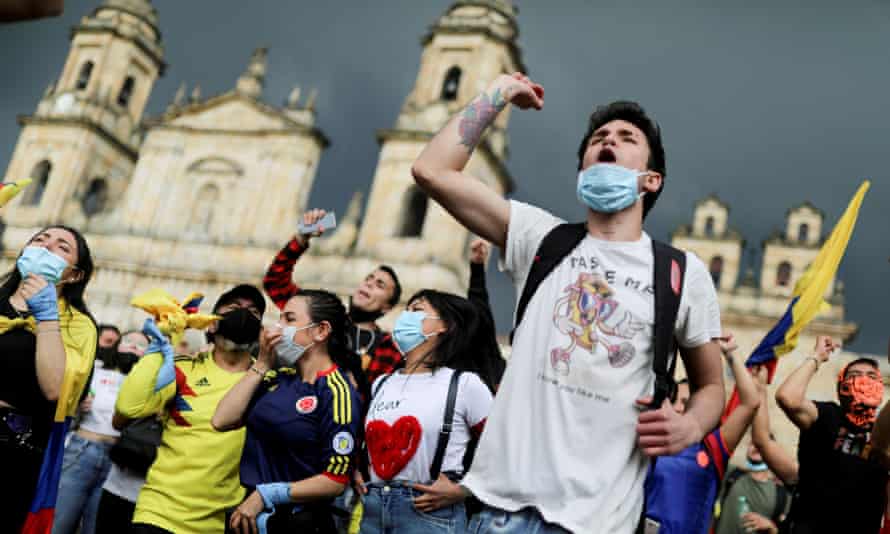 Demonstrators in Bogotá, Colombia, on 1 May. Photograph: Luisa González/Reuters

“They may have guns but they can’t kill us all,” said Gabriela Gutierrez, one of a group of students who set up a roadblock in downtown Bogotá, on Monday. “Colombia needs change and we’ll be on the streets until we get it.”

Alongside the unpopular tax proposal, protesters also marched against a deeply polarizing government, in defense of threatened human rights leaders, for an increase of the social safety net during the pandemic, and for police reform.

Although the vast majority of demonstrations were peaceful, incidents of looting and vandalism were reported in Cali, Bogotá and other cities. The road between Cali and Buenaventura, Colombia’s largest seaport on the Pacific coast, was also blocked by protesters.

Tension was ratcheted up on Saturday night when the president, Iván Duque, ordered troops on to the streets. But less than 24 hours later he was forced to scrap the proposed tax reform which would have hiked taxes on individuals and business during a coronavirus pandemic that continues to ravage public health and the economy.

“The reform is not a whim, it is a necessity,” Duque said in a televised address on Sunday afternoon while announcing the U-turn.

Duque’s concession has done little to quell protesters’ anger, with strike leaders saying that demonstrations will continue this week and that another national strike will be held on Wednesday. 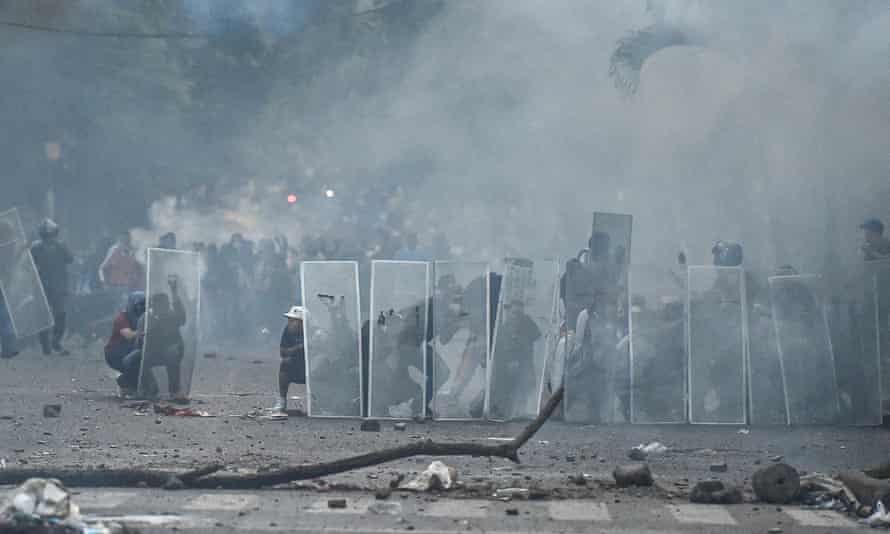 “The people in the streets are demanding much more than the axing of the reforms,” Francisco Maltés, the president of Colombia’s central workers’ union, said at a press conference on Monday morning, adding that the brutal police response had “curtailed democratic guarantees for social protest”.

Scenes of police brutality have become wearyingly familiar in Colombia. Last September, anti-police demonstrations broke out after Javier Ordóñez, a lawyer, was Tasered to death by officers. At least 10 people were killed in the ensuing unrest, and dozens of police kiosks were torched.

The confirmed death toll from the present violence is expected to rise over the coming days.

On Monday morning, following a night of cacerolazos – a noisy spectacle where people bang pots and pans from their windows – truckers blocked roads around the country. In Bogotá, as Duque held an emergency meeting with his finance minister, drivers honked in approval as students waved them slowly through the blockade.

“Every time we protest, the police draw their weapons,” said Alejandro Rodríguez, another student protester in Bogotá. “We won’t be cowed by their violence.”