Businesses on both sides of the border want joined-up thinking on when the lockdown is eased. 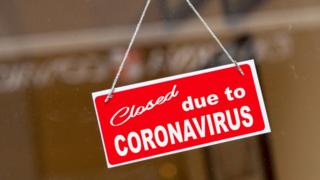 "The fact is, that front door is closed and I don't know when it's going to open back up again," said Brian McDermott, owner of the Foyle Hotel and Bistro in Moville, County Donegal.

This sentiment rings true for many hospitality businesses on both sides of the border.

Yet, depending on which side of the border your business was placed, your trade either stopped overnight or was waiting to come to a screeching halt.

"Moville is a destination for people in Northern Ireland to escape and all of that has all stopped," said Mr McDermott.

When the Republic of Ireland's lockdown restrictions were implemented, Mr McDermott closed his doors.

But, he said, his customers from Northern Ireland were confused. They were not in lockdown, so why were their bookings cancelled?

"We're watching both sides of the border in terms of a potential return because we take our governance from the Republic of Ireland, but our customer base comes from Northern Ireland," said Mr McDermott.

Business on the border

Like Mr McDermott, the hospitality industry is keeping a keen eye on developments in the south.

A recent Irish Times report said that the Republic's National Public Health Emergency Team is discussing an early stage plan that would see cafes and restaurants reopen by the middle of the summer and people being allowed to travel within Ireland for holidays by late summer.

On Thursday, two major business groups wrote to the governments in Dublin and Belfast to urge co-ordination in the recovery from coronavirus.

The CBI and its Irish equivalent, Ibec, say an economic reboot will need "the highest level of co-operation, co-ordination and joined-up thinking".

Around the border areas in Northern Ireland, the hospitality sector relies quite heavily on cross-border trade.

"It's often said if you go into Derry/Londonderry, 40% of the number plates will be from Letterkenny," said Colin Neill, chief executive of Hospitality Ulster.

"That's a sign of how much movement there is back and forward, wining, dining and socialising."

Image copyright Getty Images Image caption Tourism Northern Ireland says there have been 1,300 permanent lay-offs since the beginning of the coronavirus pandemic

"When the social distancing restrictions came into force down south, there was a bit of confusion", he said.

"We even saw a very slight rise in consumers coming across north because of the different elements and that can cause confusion," said Mr Neill.

"If we go forward and with different social distancing rules in the Republic of Ireland and the north of Ireland, there could be issues and confusion, particularly for customers if the distance is different and the policies are different."

Mr Neill said it is really important that both sides of the border address the pandemic with "a joint approach as much as possible", with similar guidelines so that "there's a clear and concise message".

"For the importance of safety for our staff and customers, we have to reopen at the right time," he said.

Dermot Doherty, owner of the Scullery Cafe in Londonderry, agrees with Mr Neill.

As he watched news rolling in about other countries in lockdown, he knew something was coming.

"We were still really busy, but we closed before the lockdown came in here. It just didn't feel right," he said.

Mr Doherty has 18 staff members across three locations. Nine of those, including himself, are living in Donegal.

"I think there has to be a joined-up plan of opening for both the north and the south.

"You have to be on the same page and the same ideas. There's no point in the south opening, people would just go over the border."

Business beyond the lockdown

Mr McDermott spent €2m (£1.7m) renovating his premises on Main Street in Moville when he was forced to close.

"We've laid off 25 staff on a short-term basis and more importantly your income has stopped, but your costs have continued in terms of utilities and associated costs with just keeping the business ticking over."

He added: "I estimate it's going to take us in and around €100,000 (£87,477) to return to working capital capacity because we're just two years gone, we weren't able to build up our collateral."

As Mr McDermott sees it, "you'd be the bravest business globally if you were to write a business plan for a hospitality business right now".