Taoiseach Leo Varadkar also announces a five-stage road map from 18 May, which will "reopen the country in a slow, phased way". 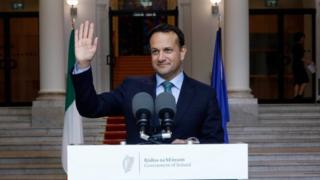 The Irish government has signalled an easing of lockdown restrictions from Tuesday.

People who are over 70 and currently cocooning can leave their homes as long as they avoid contact with others.

The 2km exercise limit currently in place for the Irish population will be extended to 5km.

Irish prime minister Leo Varadkar also announced a five-stage road map from 18 May, which would "reopen the country in a slow, phased way".

In a live televised address to the nation on Friday evening, the taoiseach said: "So on the 18th of May, Ireland begins to reopen and begins that journey to a new normal."

The majority of the lockdown measures will remain in place until 18 May, although two will ease in the coming days.

The road map after that is set out in five phases and will work on two-to-four week cycles monitored throughout, with each stage dependent on the success of the previous one.

Mr Varadkar stressed the need for caution as "the risk of a second phase of the virus is ever present".

"If we relax the restrictions too soon, we could see our ICU overcrowded," he said.

"Everything we achieved would be lost, so we must go on a short time more."

The plans were agreed by cabinet after medical experts on the National Public Health Emergency Team (Nphet) provided advice to the government earlier on Friday.

The current lockdown period had been due to expire on Monday.

Mr Varadkar said the last few weeks had transformed people's lives "in so many different ways and ways that we could not have imagined".

"I know it has been difficult - sometimes dispiriting," he said.

"The frustration of having our lives restricted. The uncertainty about when things will get back to normal. The fear of the virus itself."

He also spoke of the pain of the families unable to properly grieve for those who had lost their lives in recent weeks.

"When we come through this, we will come together as a nation and grieve together for everyone who has died over the course of this emergency," he said.

He said people had met the crisis with "remarkable courage and sense of solidarity".

Mr Varadkar urged the public to "stay the course" and "continue the fight".

On Friday, the Republic of Ireland recorded 34 more coronavirus-related deaths, taking its total to 1,265.

There were also 221 more cases diagnosed in the Republic, bringing the number of confirmed cases to 20,833.