Coronavirus: PM to update UK on 'steps to defeat' coronavirus

Boris Johnson will lead the Downing Street briefing later for the first time since his return to work.

Coronavirus: PM to update UK on 'steps to defeat' coronavirus 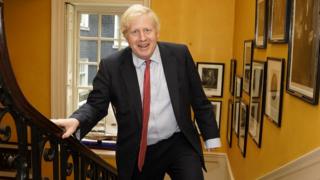 Prime Minister Boris Johnson will chair a cabinet meeting later and then lead the daily coronavirus briefing for the first time since his return to work.

No 10 said the PM, whose fiancee gave birth on Wednesday, will update the UK on the "fight against this disease and the steps we are taking to defeat it".

But political editor Laura Kuenssberg said he was unlikely to give "chapter and verse" on lifting the restrictions.

Health Secretary Matt Hancock pledged to reach the goal by the end of April. It reached just over 52,000 coronavirus tests on Tuesday.

A scientist advising the government on testing, Prof John Newton, said he is confident the target will be met, but warned there will be a lag in the data.

Mr Johnson, who has just recovered from Covid-19, returned to work in Downing Street this week but missed Prime Minister's Questions on Wednesday following the birth of his son with his fiancee Carrie Symonds.

What's next? The prime minister will not give chapter and verse later today on exactly how and when the country's doors will re-open.

But after meeting his cabinet virtually, Boris Johnson will seek to explain to the public how and why, if not exactly when, they will make the decisions that are vital, not just to our health, but the country's suffering economy too.

He'll restate the hurdles that must be passed before any restrictions are lifted, including making sure the NHS can cope, with tests, and equipment, and a consistent fall in the death rate.

Crucially he will emphasise the importance of the so-called "R" rate of infection - in other words, the extent to which people with the virus are passing it on.

That rate has come down significantly since the lockdown was imposed, slowing the spread of the disease. But Mr Johnson will outline how the "R" rate will be a crucial yardstick of whether to lift, or even reinstate, restrictions as the weeks go on.

It comes as the Scientific Advisory Group for Emergencies (Sage), which is working on a range of options for easing lockdown restrictions, prepares to meet later. The lockdown is due to be reviewed on 7 May.

Earlier this week, Mr Johnson said the lockdown would not be relaxed too soon and details on any changes would be set out over the "coming days".

At Wednesday's press conference, Foreign Secretary Dominic Raab said he "did not know" whether the five tests for lifting lockdown had been met and warned that the country was at a "delicate and dangerous moment in this challenge".

He said that the UK was still "coming through the peak" of the virus and called for people to maintain social distancing measures "until we are out of the woods".

The total number of people who have died in the UK with coronavirus has now passed 26,000, as official figures include deaths in the community, such as in care homes, for the first time.

A new method of counting includes retrospective deaths since the beginning of March.

The health secretary set out the government's daily testing target of 100,000 per day on 2 April, even though Mr Johnson initially identified the aim to carry out 250,000 tests a day.

The latest figures announced during Wednesday's briefing showed 52,429 people were tested for Covid-19 in the UK on Tuesday, despite Mr Hancock announcing a massive expansion of the groups eligible for testing earlier in the week.

Ministers say that there is capacity for about 73,000 tests per day, and Downing Street has repeatedly said it is aiming to reach its target by Thursday.

Prof Newton, director of public health improvement for Public Health England (PHE), said on Wednesday that he was "pretty confident we will hit that target."

He said there would be a lag due to receiving the data but it would be clear whether the government has reached the target by the end of the week.

But a report by NHS Providers, which represents hospitals and NHS trusts in England, dismissed the target as a "red herring".

Describing the target as "arbitrary", the report said it risked preventing the development of a "proper, next stage testing strategy", adding: "It may be testing for testing's sake."

Chris Hopson, the chief executive of NHS Providers, said trust leaders needed "clarity" on the testing regime and how it will be developed.

A spokesman for the Department of Health and Social Care said testing was "absolutely critical" and capacity at NHS and PHE laboratories had more than doubled within weeks.

People over 65 and anyone who cannot work at home are also among millions able to apply for a coronavirus test if they have symptoms, under the government's expanded testing programme.

The expansion in eligibility beyond just essential workers and hospital patients means 25 million people can now book through the government's test-booking website.

Some 14,700 home tests and 33,000 drive-through appointments were booked on Wednesday.