A third of the government's 122,300 tests in 24 hours were sent in the post but not necessarily completed. 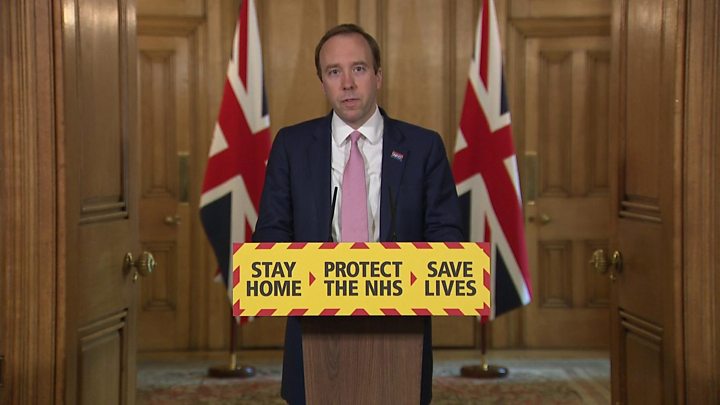 Media playback is unsupported on your device
Media captionTesting will "help us to unlock the lockdown", Matt Hancock says

Mr Hancock said the 100,000 target was "audacious", but testing was needed to get Britain "back on her feet".

The figure includes 40,000 tests sent out, including directly to people's homes, which may not yet have been taken.

Some 27,510 people have now died in UK hospitals, care homes and the wider community after testing positive for coronavirus.

Of the 122,347 tests provided in the 24 hours up to Friday morning, the number of people tested was fewer - at just over 70,000 - as has been the case since the testing programme began. This is because some people need to be tested more than once to get a reliable result.

The total testing figure includes 27,497 kits which were delivered to people's homes and also 12,872 tests that were sent out to centres such as hospitals and NHS sites.

However, these may not have been actually used or sent back to a lab.

Labour's shadow health secretary Jonathan Ashworth suggested the government had been misleading. "This isn't a time for quibbling but actually 39,000 of these tests have simply been posted out so it's not quite that the government have hit their commitment," he told the BBC News channel.

"I don't think posting out the tests is the same as carrying out tests but nonetheless it is welcome that testing has increased."

Prior to 28 April, there was no reference to how tests were counted, but on 28 April guidance on the government website said home tests and satellite tests were being included.

At the daily Downing Street briefing, Prof John Newton - a scientist advising the government on testing - said there had been "no change to the way tests are counted".

"As we've developed new ways of delivering tests, we've taken advice from officials as to how they should be counted," Prof Newton said.

"So, the tests that are done within the control of the programme - which is the great majority - are counted when the tests are undertaken in our laboratories.

"But, for any test which goes outside the control of the programme, they're counted when they leave the programme - so that's the tests that are mailed out to people at home and the test that's gone out on the satellite."

It is testament to the hard work that has been done behind the scenes by a partnership of government, scientists and the private sector - with a helping hand from the military.

But has the government been a little creative with its counting? It has included home-testing kits sent out to individuals as well as the satellite kits - these are batches of tests sent out to care homes and other settings where there are lots of people who need testing.

Some, no doubt, will never be returned.

A week ago these made little difference to the figures - only a few thousand a day were being sent out. But now they account for around a third of the tests.

In his opening remarks, the health secretary suggested the government's 100,000 target had had a "galvanising effect".

He said the testing capacity built since then would "help every single person in this country", and would "help us to unlock the lockdown".

Mr Hancock said the government's "next mission" was its test, track and trace operation and work was already under way to roll it out.

"The combination of contact tracers and new technology, through our new Covid-19 NHS app, will help tell us where the virus is spreading and help everyone to control new infections." 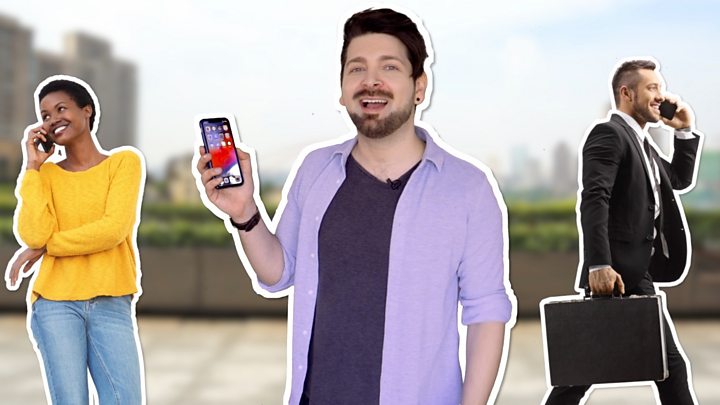 Media playback is unsupported on your device
Media captionWATCH: What is contact tracing and how does it work?

Mr Hancock added that the next phase would allow the government "to reassert, as much as is safely possible, the liberty of us all".

How testing was expanded

The Department of Health established a testing network, including three "mega labs" to test samples, almost 50 drive-through centres, a home-testing service and mobile testing units, as part of the drive to achieve the government's target.

Meanwhile, Mr Hancock also expanded the list of people eligible for testing throughout the month. 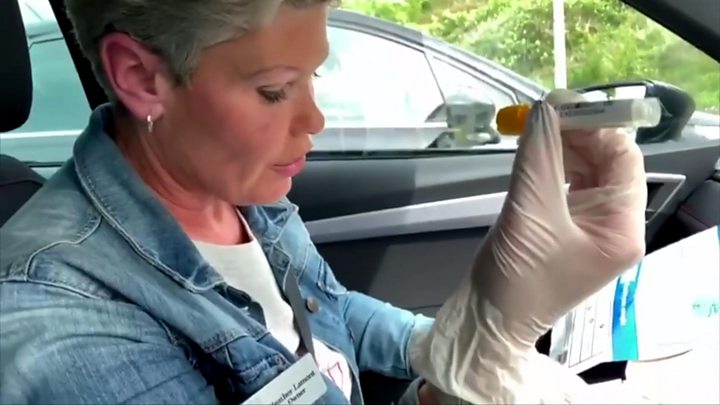 At first, across the UK, the focus was on testing the sickest patients in hospitals, followed by health, care and emergency services staff.

As of last week, other essential workers and their families in England became eligible for testing, if they showed symptoms.

Testing was further expanded in England earlier this week to millions more people, with symptoms including over-65s, those who have to leave home to work, and people living with someone in these groups.

In Scotland, First Minister Nicola Sturgeon announced earlier that testing will be expanded to over-65s with symptoms and also all those in care homes where there has been an outbreak.

And on Friday, the Welsh government extended coronavirus testing to people in care homes even if they are not showing symptoms of the disease.