With substandard medicines already in wide circulation, fears are growing that coronavirus could create a lethal ‘parallel crisis’

When Joana Opoku-Darko’s daughter Anna was 18 months old, she came down with malaria, a disease common in Ghana and especially deadly for children.

She bought medication from a pharmacy in Ghana’s capital, Accra; when Anna’s fever didn’t subside she took her to a hospital, where they ran some tests.

When Joana Opoku-Darko’s daughter Anna was 18 months old, she came down with malaria, a disease common in Ghana and especially deadly for children.

She bought medication from a pharmacy in Ghana’s capital, Accra; when Anna’s fever didn’t subside she took her to a hospital, where they ran some tests.

“I was anxious, as a first-time mother. I didn’t have the experience to tell whether it’s going to get any better, or am I going to lose my child?” she says.

“They told me the medicine was no good, and we needed to start treatment all over.”

Opoku-Darko had bought fake malaria treatment drugs. Had she not gone to the hospital, Anna could have become another sorry statistic in a country flooded with substandard medicines.

The experience has Opoku-Darko worried about the pandemic, especially as experts warn issues of falsified drugs, already very deadly in Africa, will become even greater under Covid-19.

The World Health Organization (WHO) estimates that one in 10 medical products circulating in low- and middle-income countries are either substandard or fake, which is both dangerous and a waste of precious family money. Various academic studies have put the prevalence at between 11% and 48%.

Of 1,500 reports of such products, most came from Africa (42%), with south-east Asia also a major hotspot for fake medications.

It is impossible to know precisely how many such medicines are in the system. Delese Mimi Darko, chief executive of Ghana’s Food and Drug Authority (FDA), says this is an ongoing problem, especially as people smuggle drugs across the country’s borders. She too worries that Ghana, with more than 1,500 reported Covid-19 cases, will see an increase in falsified and substandard medicines due to the pandemic. Already the FDA has seized substandard hand-sanitisers.

“The current focus on curbing Covid-19 spread means there is less focus on routine market surveillance,” says Darko. “This means there could be an influx across porous borders of substandard medical products – including those for Covid-19.”

Measures like social distancing and lockdowns limit the work the regulators could do, she added.

The FDA is also keeping an eye on social media posts offering unsubstantiated cures. Ghana’s police service has cautioned people to beware online offers of vaccines for Covid-19. Earlier this month, the WHO warned of falsified chloroquine products found in Cameroon, Niger, and the Democratic Republic of the Congo, and called for “widespread vigilance” from all countries.

Chloroquine has been used in Africa for decades as an antimalarial, but it became internationally famous after Donald Trump said it could be a “gift from God” in the fight against Covid-19. Such claims have led to people hoarding the medicine, leading to reports of price hikes and shortages. In Nigeria, three people overdosed on the drug. 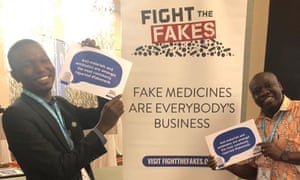 Activists for the campaign group Fight the Fakes at a Wellcome Trust-sponsored launch in Accra, Ghana. Photograph: Fight The Fakes

Kwasi Boateng, director of United States Pharmacopeia-Ghana, a public health non-profit that focuses party on combating falsified medicines, is concerned the pandemic might eventually cause a shortage of essential medicines in Ghana, allowing substandard or falsified treatments to fill the void. While he has not seen shortages of essentials yet, he says Ghana is still early in its battle with the virus and “time will tell”.

Boateng fears that if and when any official Covid-19 treatment is found, fake versions might find their way into the county.

“The kind of medicines that people normally want faked are the ones that are in demand. So, if a new medication comes up which manages the condition, that makes it very attractive for people to want to latch on to it, so we all have to be vigilant.”

Chloroquine is no longer used in Ghana to treat malaria, but rumours suggest substandard chloroquine has been in circulation. “If we find any chloroquine on the market now, there is likely to be issues with it,” says Boateng.

In March, an Interpol operation reported an increase of more than 100% in seizures of unauthorised chloroquine, compared with the previous year. The organisation said this could be connected to the Covid-19 outbreak.

The WHO’s public health expert, Dr Mary Stephen, has said: “From the beginning of the outbreak there has been a lot of rumours and speculation in terms of which drugs will be effective for Covid-19, for Africa.”

She says steps have been taken to stem the tide of fake drugs. In January, a handful of African leaders signed the Lomé initiative, pledging new measures, including better border controls and legal processes against the smuggling of falsified products.

The founding director of the Lao-Oxford-Mahosot Hospital-Wellcome Trust Research Unit, Dr Paul Newton, warns of a “parallel crisis” of quality, availability, and access to medical products and medicines, for all essential medicines.

With global supply chains interrupted and physical distancing rules in place, regulatory work inspecting pharmaceutical factories is decreasing, Newton says. “That raises the risk of substandard medicines, and of companies cutting corners and making mistakes in the rush to manufacture,” he warns.

Newton is concerned about what will happen if and when health authorities do find medicine to prevent or treat Covid-19, and how the world’s 7.8 billion people will access it. There needs to be coordinated production and strict quality surveillance, he warned.

Before a medicine is found, Newton says he suspects criminals will have the equipment ready to make vast amounts of it.

“When they know it’s ‘medicine X’, they will make fake copies, insert them in the supply chain and make enormous amounts of money – and kill people, to be brutally frank.”

To counter this parallel crisis, Newton calls for a global, prepared approach to assure the quality of diagnostic tests, drugs, and vaccines, where drugs are affordable and not hoarded or diverted from treating existing conditions.