No one knows if summer tourists will arrive, or how businesses will survive if not

The coronavirus crisis has flung Europe’s tourism sector into chaos, with borders closed and airlines grounded. But if that is frustrating for holidaymakers, it risks ruining holiday businesses and devastating the economies that depend on them.

From the Algarve in Portugal to the Greek islands, and from the chic resorts of Italy’s Amalfi coast to the pubs and clubs of the Spanish costas, no one knows whether Europe’s holidaymakers will come this year, or how to survive if they do not.

The coronavirus crisis has flung Europe’s tourism sector into chaos, with borders closed and airlines grounded. But if that is frustrating for holidaymakers, it risks ruining holiday businesses and devastating the economies that depend on them.

From the Algarve in Portugal to the Greek islands, and from the chic resorts of Italy’s Amalfi coast to the pubs and clubs of the Spanish costas, no one knows whether Europe’s holidaymakers will come this year, or how to survive if they do not.

The losses are already dramatic. The European commission estimates that the EU’s hotels and restaurants will lose half their income this year. Tourism revenues fell by 95% in Italy and 77% in Spain in March, according to the banking group UBS.

Across southern Europe, where recovery from the 2008 crisis relied to a significant extent on tourism, the sector is vital to national economies. It accounts for 20% of GDP in Greece, 18% in Portugal, 15% in Spain and 13% in Italy, according to the World Bank.

The EU’s internal market commissioner, Thierry Breton, has called for a “Marshall plan” using funds from Europe’s vast economic stimulus packages to haul hotels, restaurants and tour operators back from collapse, and the EU’s executive has promised guidelines for a coordinated restart to travel.

Increasingly desperate business owners are demanding action, but many governments do not sound positive. Holidays in other EU countries are not yet possible for Germans, the chancellor, Angela Merkel said bluntly on Thursday. 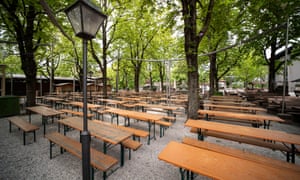 France’s prime minister, Edouard Philippe, said it would “not be reasonable to imagine travelling very far abroad very soon”, and Spain’s foreign minister, Arancha González Laya, said the country would gradually reopen to tourism, but not until “we are in a position to guarantee tourists’ safety”.

The bloc’s internal borders remain closed for leisure travel, with no prospect of an imminent reopening or decision likely before at least the end of May.

Germany this week extended a warning against foreign travel until mid-June. Until further notice, all non-nationals arriving in France, including from EU states, must declare an essential professional or family reason for their journey or they will be turned back.

Even domestic travel is still severely restricted in some countries. Italy’s prime minister, Giuseppe Conte, has said Italians should go on holiday in Italy, but they will not be permitted to journey between regions when restrictions begin to ease on 4 May. French citizens, too, will be limited to a 100km radius of their homes from 11 May.

The EU’s transport and tourism roadmap suggests travel restrictions within the bloc could first be eased “between areas with a comparably low reported circulation of the virus”, prompting the Czech Republic, Slovakia and Croatia, which have reported low numbers of infections, to propose corridors to the Adriatic coast.

These could perhaps be accompanied, it has been suggested, by a common “Covid-19 passport” testifying to the bearer’s health before travel, or by in-resort testing once they arrive.

Germany has rejected bilateral solutions. The country’s foreign minister, Heiko Maas, said an EU “race to see who will allow tourist travel” first would pose unacceptable risks, turning down an offer from Austria for Germans to take their holidays there and pointing to the role of the Austrian ski resort of Ischgl in accelerating the spread of the pandemic in central Europe.

For the destination countries most affected, part of the strategy involves ensuring visitors unable to come this summer return later. In Portugal, which has so far kept its coronavirus death toll below 1,000, vouchers are being issued to those forced to cancel, allowing them to reschedule trips until the end of 2021. 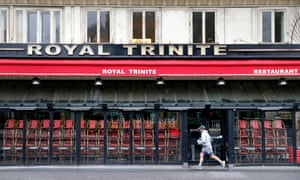 A jogger runs past a closed restaurant in Paris. Photograph: Chesnot/Getty Images

Some hotels and restaurants are still counting on being able to reopen, but the head of the Algarve tourist business association, Elidérico Viegas, has said many will not. Foreign visitors are unlikely to return until April next year, he said.

Spain’s coronavirus outbreak has spiralled into one of the world’s worst, and more than 24,500 people have died, but some of the country’s tourist hotspots have emerged relatively unscathed, allowing some hope that they might yet host a summer season.

“The Balearics rank among the safest areas in Europe with one of the lowest rates of contagion,” said Iago Negueruela, the regional official in charge of economy and tourism for the islands. Officials are cautiously hoping that international tourists could be allowed to visit Mallorca and Ibiza from late July.

Spain was the world’s second most-visited country in 2019, with nearly 84 million tourists. A heavy economic reliance on tourism has left administrations scrambling to develop protocols capable of protecting what travellers do this summer.

“We want to have everything prepared so tourists can arrive as soon as possible,” said Negueruela. The challenge lies in striking a balance between attractions such as the discotecas of Ibiza and the new reality demanded by Covid-19. “Some sectors will have more significant adaptations,” he said. “That much is clear.”

Greece, like Cyprus, is pushing for the EU to agree a common way forward. For both, the question is existential. More than a fifth of their workforces are employed in the sector, almost double the EU average, and tourism is the single biggest contributor to their economies.

Greece says it foresees a July start to the season, with a low rate of infection and Covid-19 deaths fuelling optimism it can project itself as a safe destination. “All bets are on the next two months,” said Grigoris Tasios, the president of the Panhellenic Federation of Hoteliers.

Resorts in northern Greece are looking to boost occupancy from neighbouring Balkan states that have also handled the pandemic well. “Romania, Bulgaria, Serbia and Skopje [Macedonia] together have a population of 40 million and from any of them people can get to us by car,” he said.

Italy’s tourism minister, Dario Franceschini, said the country was working hard to strike a balance between safety concerns and the reopening of tourism facilities. “It won’t be easy, but we’ll see it through,” he said.

Businesses are experimenting with four-metre plexiglass barriers on beachfronts and restaurateurs with glass shields between tables, but all know the impact on tourism will will be felt for years to come. Business is not expected to return to pre-coronavirus levels until 2023.

Additional reporting by Ashifa Kassam in Madrid, Helena Smith in Athens, Lorenzo Tondo in Palermo and Philip Oltermann in Berlin