Gottlieb told CNBC states must 'try to provide a pathway that allows people to gradually get back to normal' but said it was 'prudent' that mask mandates remain in place.

By Rachel Sharp For Dailymail.com

Dr. Gottlieb, who headed up the Food and Drug Administration from 2017 until April 2019 under Donald Trump and is now on the board of Pfizer, told CNBC's 'Squawk Box' Friday he believes states 'need to try to provide a pathway that allows people to gradually get back to normal activity' as the US continues to get more vaccines into the arms of the American people.

He pointed to Connecticut, where he lives and also acts as a pandemic adviser to Democratic Governor Ned Lamont, as a good example after the state announced the lifting of all capacity limits on several businesses from mid-March but is leaving its mask mandate in place.

This strategy is somewhat different, he said, to the blanket lifting of all COVID-19 restrictions and scrapping of mask mandates that Texas and Mississippi embarked on earlier this week. 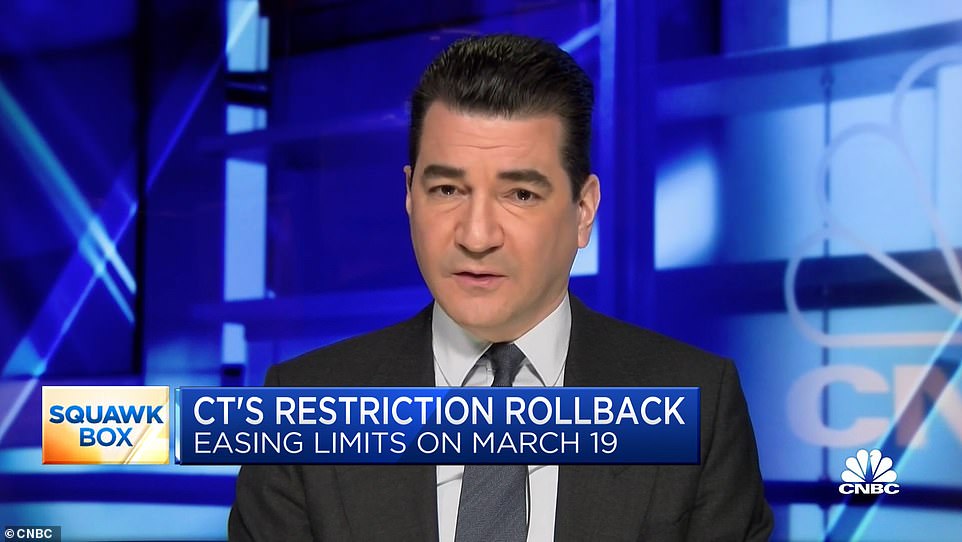 Joe Biden blasted the Republican governors for their 'Neanderthal thinking' while Fauci described the move as 'inexplicable' and said restrictions shouldn't be eased until new daily COVID-19 cases fall below 10,000.

Clashes over state plans to get back normal life come as cases, deaths and hospitalizations have fallen since the start of the year and 16.7 percent of Americans have received at least their first dose of the vaccine.

But on Friday, infections crept up once more toward the 70,000 mark, according to the COVID Tracking Project.

Daily deaths also inched up from 1,743 Thursday to 2,221 Friday, however this is still around half the daily death toll recorded one month ago.

The COVID Tracking Project said the uptick in deaths was due to a change in reporting by Ohio with officials now announcing data twice a week instead of daily.

While cases and deaths increased Friday, hospitalizations fell from 44,172 to 42,541 with eight states now recording less than 50 COVID-19 patients in hospitals per million people.

Just one month ago in early February, only two states had reduced their hospitalizations to this level. 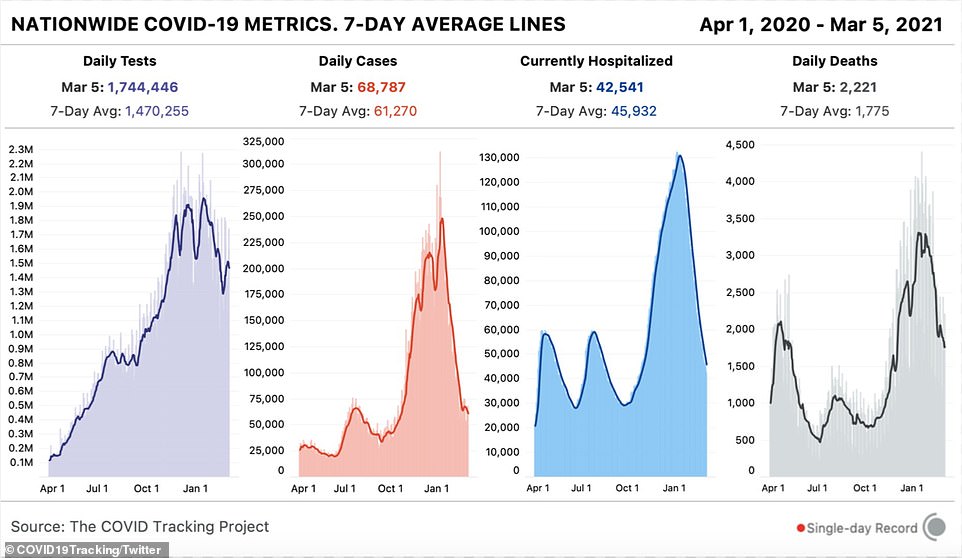 On Friday, infections crept up once more toward the 70,000 mark and deaths also rose, according to the COVID Tracking Project 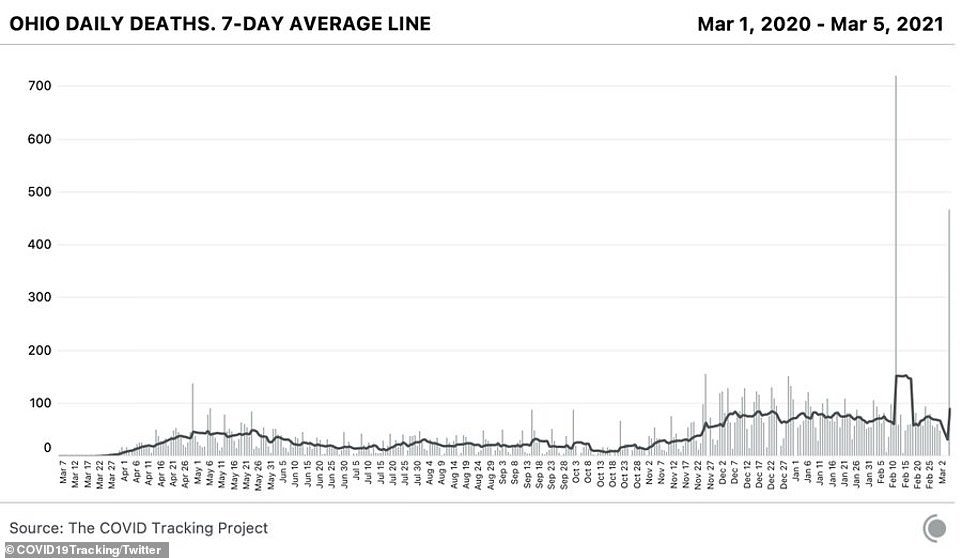 With the data moving in the right direction in recent weeks, several governors have lifted COVID-19 restrictions - a move that is dividing health experts.

Gottlieb told CNBC he thinks now is the time to begin easing rules without 'taking our foot off the brake all at once'.

'I think it's the kind of thing we need to be doing around the country, is at least providing a map of where we're heading if the situation continues to improve without taking our foot off the brake all at once,' he told CNBC.

However, Gottlieb said the last thing that should be lifted is mask mandates.

'Leaving the masks in place, having that be the last thing we lift, I think that's prudent,' he said.

Gottlieb also pointed to differences in the relaxation of restrictions in different parts of the US calling Connecticut a 'middle path' compared to Texas's 'full reopening.'

In the Constitution State, it is 'not quite the full reopening that Texas did,' he said.

'I think the governor here is carving a prudent middle path.' 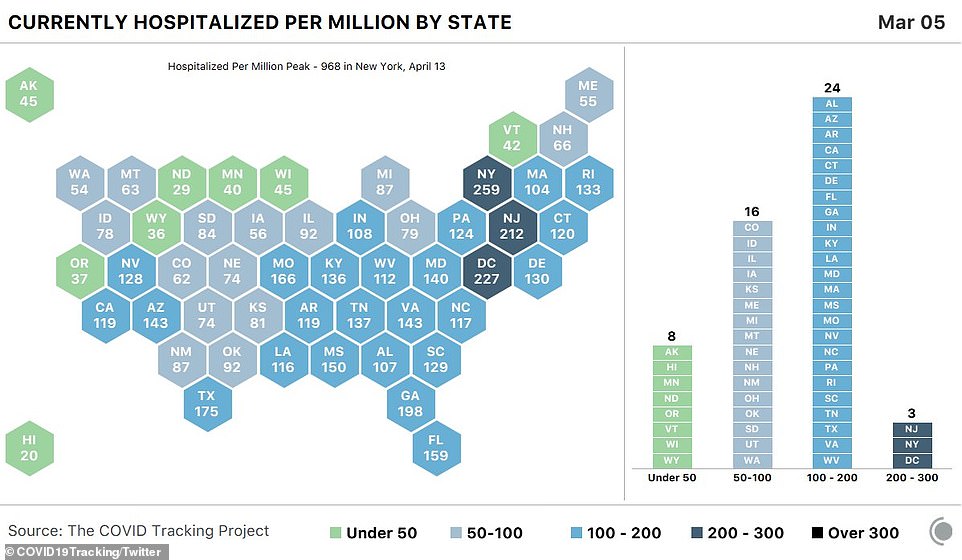 While cases and deaths increased Friday, hospitalizations fell from 44,172 to 42,541 with eight states now recording less than 50 COVID-19 patients in hospitals per million people

Lamont announced Thursday that restaurants, retail, libraries, personal services, indoor recreation, gyms, museums, offices, and houses of worship in the state can all open at 100 percent capacity from March 19 onward.

Face coverings will continue to be required and bars that do not serve food will remain closed until further notice.

The announcement came one day after Biden blasted the 'Neanderthal' decision by the governors of Texas and Mississippi to drop mask mandates and fully reopen their states before their populations are vaccinated.

Texas Governor Greg Abbott said Tuesday the state's mask mandates and restrictions will end on March 10 as he vowed it was time to 'open Texas 100 percent'.

Mississippi Governor Tate Reeves almost immediately followed suit announcing he was rolling back all county mask mandates and removing statewide restrictions on all businesses from Wednesday, with the exception of maintaining a 50 percent capacity on indoor arenas and keeping rules in place for K-12 schools. 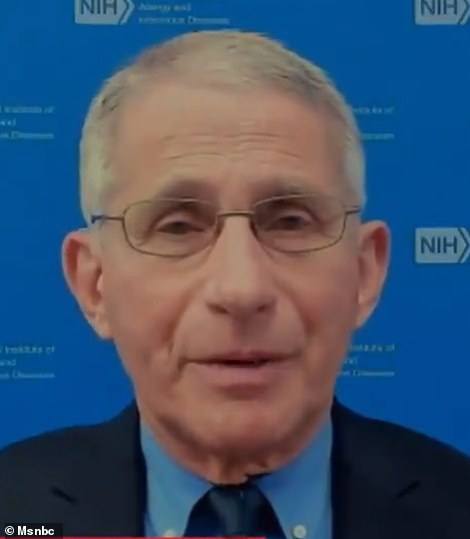 Gottlieb's comments clashed with Dr. Anthony Fauci who slammed the decision by some governors to list all rules 'inexplicable'

Gottlieb, who sits on the pandemic advisory team for Lamont, said the Connecticut governor has taken the right approach.

'I think you need to try to provide a pathway that allows people to gradually get back to normal activity.'

He added that the state will continue to watch the data: 'If the situation changes, I'm sure they'll reassess it.'

The former FDA chief's comments clashed with Fauci, the CDC and President Biden who say now is not the time to let up on restrictions.

Fauci told CNN's Jake Tapper Thursday that new daily cases should at least be below 10,000 'and maybe even considerably less than that' before restrictions are eased as he slammed the decision by some governors to list all rules 'inexplicable' and 'ill-advised'.

Fauci urged the residents of Texas and Mississippi to still adhere to the federal guidelines regarding public health measures.

'We will be able to open up the country, open up the economy, but right now we want to get that level of virus much lower than it currently is,' he said.

'We've reached the situation over the last week where it seems to have plateaued at a level of somewhere between 60,000 and 70,000 infections per day.

'With that amount of virus circulation at the community level, it really is quite risky to completely remove all of the public health measures and just act like there's no virus in the community when we know it is at an unacceptably high level.' 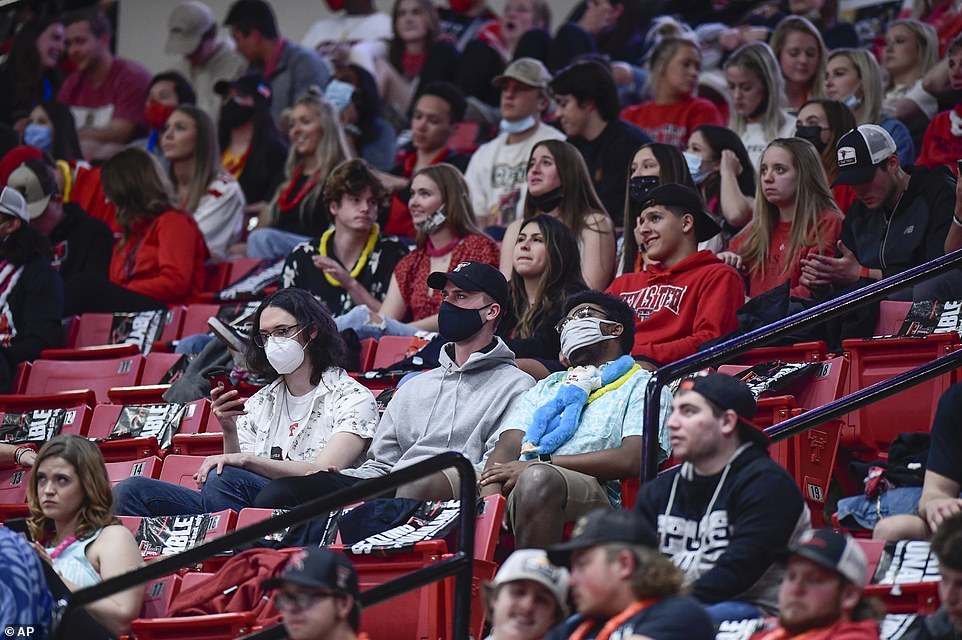 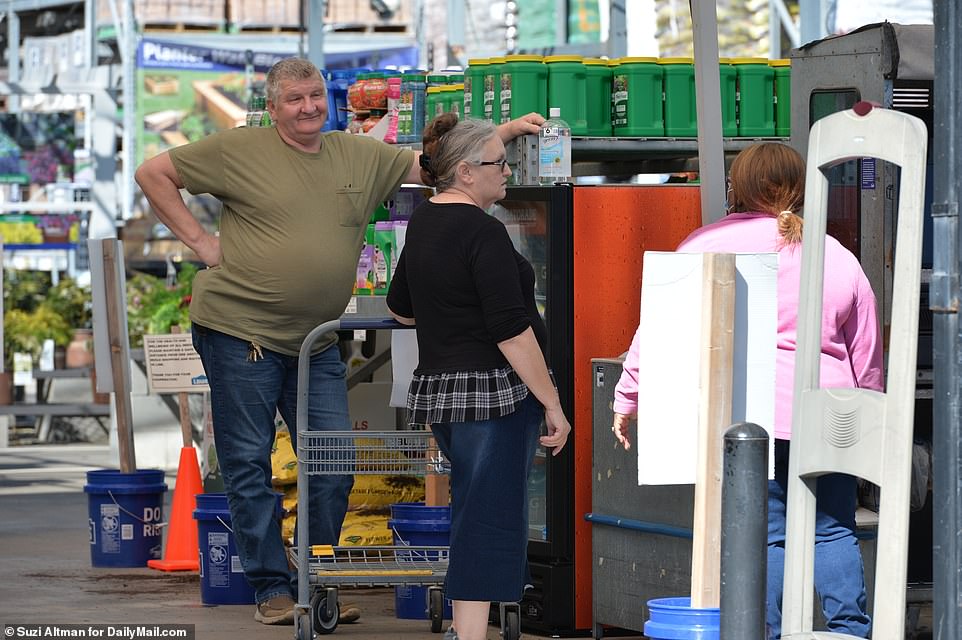 MISSISSIPPI: Residents were pictured shopping without masks in Jackson Mississippi on Thursday

'Now is not the time to release all restrictions,' she said. 'The next month or two is really pivotal in terms of how this pandemic goes. I would still encourage individuals to wear a mask, to socially distance.'

Biden took a harsher tone on Wednesday saying: 'I think it's a big mistake. The last thing we need is Neanderthal thinking.'

But Gottlieb argued Connecticut is in a good position to ease restrictions as it is among the states leading the way with the vaccine rollout.

'Connecticut has done a lot better than most states in getting vaccines into their older population,' he said.

'They've done an age-based approach. They've been very successful in getting 65 and above vaccinated, so as the overall vulnerability of the population declines, it allows you to lean forward a little bit.'

Around 22.3 percent of the state's population have received at least their first dose of the vaccine while 8.9 percent have been fully inoculated.

Nationwide, 85 million doses have now been administered with 16.7 percent receiving their first dose and 8.6 percent their second. 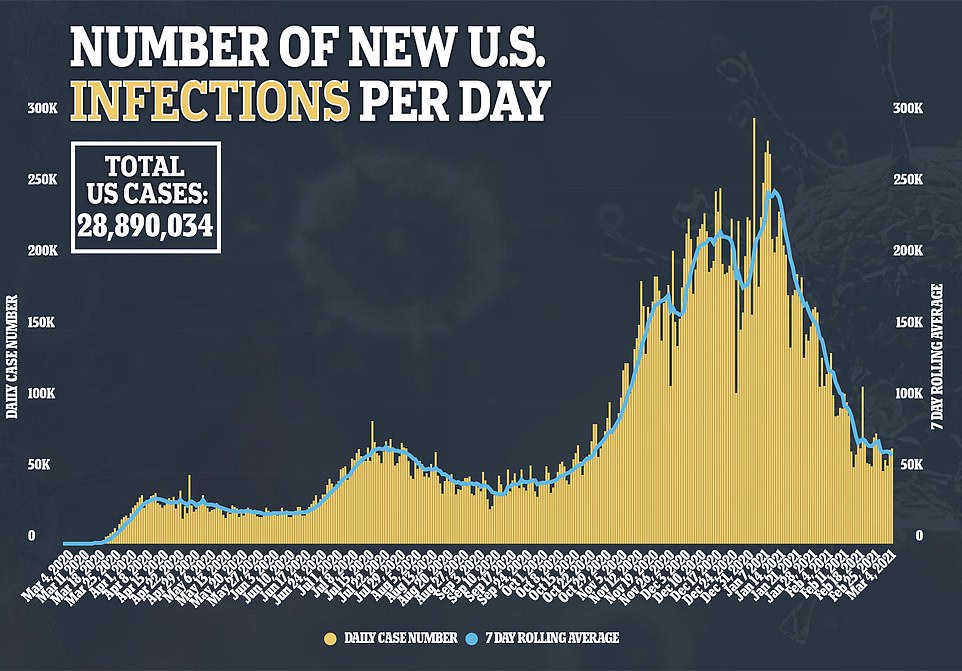 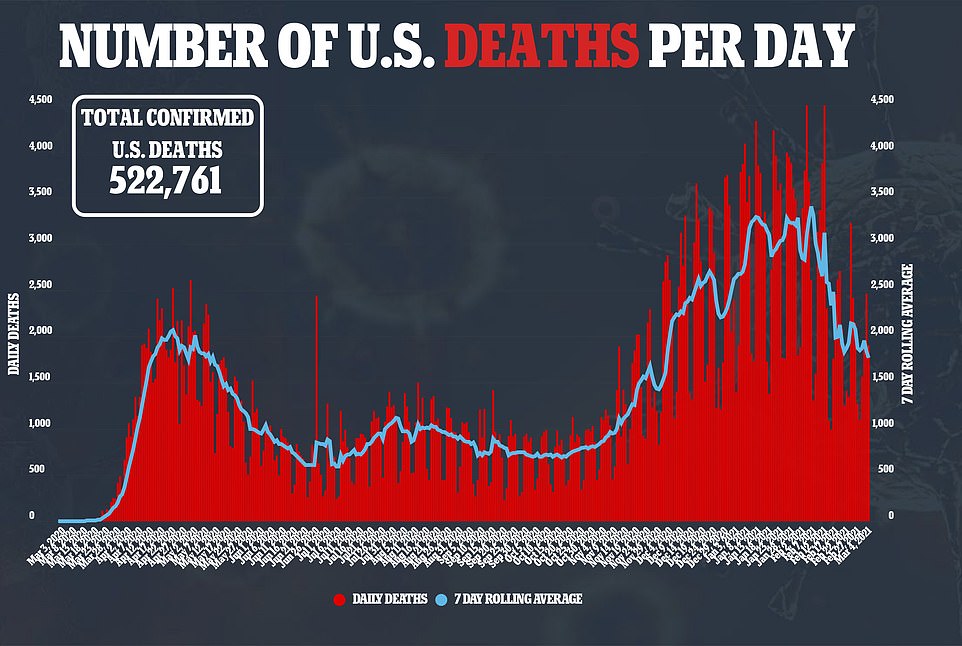