The European Central Bank could reiterate Thursday (30 April) its power to do more still to cushion the eurozone economy from the impact of the novel coronavirus, analysts said, while maintaining pressure on governments to agree a joint response.

The European Central Bank could reiterate Thursday (30 April) its power to do more still to cushion the eurozone economy from the impact of the novel coronavirus, analysts said, while maintaining pressure on governments to agree a joint response.

Without agreement between national capitals on joint fiscal mechanisms, “it’s again up to the ECB to do the economic policy heavy lifting and fight the recessionary effects of the crisis,” Eric Dor of France’s IESEG business school told AFP.

While last month’s press conference at the Frankfurt institution was held in person under strict distancing conditions, April’s briefing will take place online from 1230 GMT.

Lagarde is expected to hammer home that the ECB is “determined to increase if necessary the size of its interventions, to continue stabilising public and private bond markets,” Dor said.

The crisis threatens the ECB’s primary objective of maintaining inflation around 2.0%, with price growth in top economy Germany falling to just 0.5% in March.

But “additional monetary stimulus at the current juncture could be the allegorical attempt to catch a falling knife,” ING bank economist Carsten Brzeski said.

Looking ahead, “the depth of the contraction, low inflation and falling inflation expectations and the risk of a further widening of government yield spreads” all argue for stocking up measures like the ECB’s Pandemic Emergency Purchase Programme (PEPP) at some point, Brzeski added. 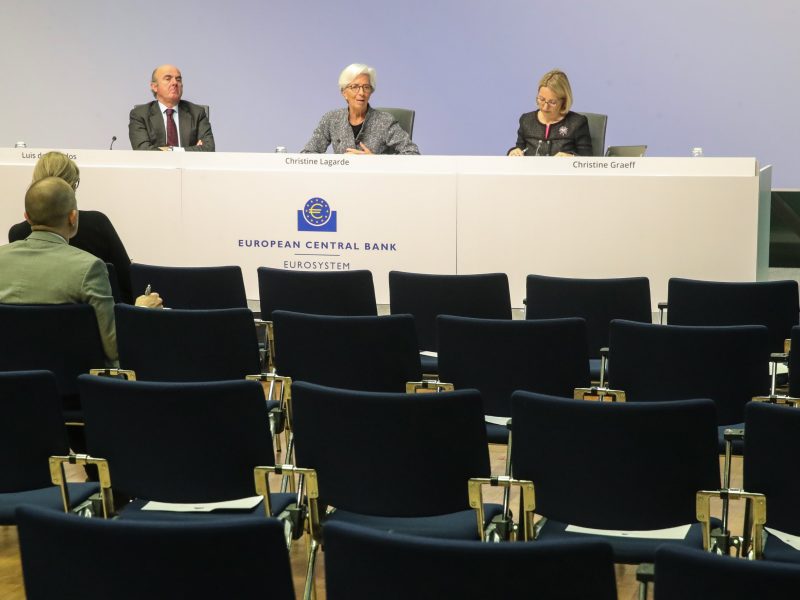 All eyes on ECB for further virus-fighting moves

The European Central Bank has launched a series of never-before-seen measures to cushion the economic blow from the coronavirus pandemic but it looks set to reaffirm Thursday (30 April) it will do more still, even if some of the options appear limited.

Via an existing monthly bond-buying scheme and the newly launched €750-billion PEPP, the ECB will hoover up around €1.1 trillion of government and corporate debt this year.

But the central bank’s backstop for the bond market has not stopped the difference — “spread” — between returns investors can expect on benchmark German government bonds and those of heavily-indebted eurozone members like Italy widening in recent weeks.

Nor did a decision to accept debt downgraded to “junk” status as collateral for loans to banks made under the ECB’s mammoth “TLTRO” credit scheme, designed — like bond-buying — to keep credit flowing to the real economy.

A tool the central bank could still deploy is relaxing rules banning purchases of bonds that drop below investment grade during the crisis, matching the step on collateral.

Lagarde will likely explain how decisions like abandoning limits on what proportion of any country’s debt the ECB can hold have made its purchase programmes more effective.

There is unlikely to be talk of lowering the interest rate banks must pay on their deposits in Frankfurt below the existing -0.5% — effectively charging lenders to park their cash.

In fact, policymakers could raise the share of reserves spared from the negative rate to “support banks’ profitability and encourage them to lend,” expert Dor said.

And a further gesture to banks could see more generous rates offered to those who pass their TLTRO borrowings on to the real economy in the shape of loans.

At present, the best on offer is -0.75% — which means the ECB effectively pays compliant banks to take its money.

Lagarde is likely to reiterate her March statement that “an ambitious and coordinated fiscal stance is now needed in view of the weakened outlook and to safeguard against the further materialisation of downside risks”.

So far leaders have failed to agree much in the way of burden-sharing, with a 24 April teleconference coming up short on how to finance a joint recovery plan expected to amount to hundreds of billions of euros.