Figures compiled by the Office for National Statistics show 22 per cent of over-85s in England had Covid antibodies at the start of 2021, before the inoculation roll-out began to rapidly pick up pace.

The success of England's mammoth Covid vaccination drive was underscored today by official data that shows  more than 90 per cent of over-85s now have antibodies.

Fascinating charts reveal how the proportion of elderly residents testing positive for the disease-fighting proteins — which signal they have a degree of immunity — has changed between the start of January and now.

Figures compiled by the Office for National Statistics (ONS) show 22 per cent of over-85s in England had Covid antibodies at the start of 2021, before the inoculation roll-out began to rapidly pick up pace. But the rate stood at nearly 91 per cent on February 11, according to the most up-to-date estimate.

Data also showed a dramatic rise in Scotland, Wales and Northern Ireland among the same age group — but the ONS warned its estimates in the devolved nations were not as certain because they involved smaller sample sizes.

The report — which also showed one in four people overall had Covid antibodies in England, one in six in Wales and Northern Ireland and one in eight in Scotland — looked at blood samples taken from 30,000 over-16s across the country.

Rates were highest in London, where the ONS estimated 29 per cent of people had antibodies compared to just 16 per cent in the South West of England, the lowest in the UK.

As well as through vaccination, antibodies are also made in the blood when someone catches and recovers from the virus. But the length of time antibodies remain at detectable levels in the blood is not fully known, given that studies have shown they can fade after a few months.

It comes after Government analysis showed a single dose of the coronavirus vaccines being rolled out in the UK cut hospital rates in the elderly by 80 per cent. Public Health England research also found the Pfizer and Oxford University jabs stop about 60 per cent of people from falling ill with Covid a month after their first dose.

More than 20million Britons have now received their first dose of Covid vaccines, and about 800,000 people have been given both injections. 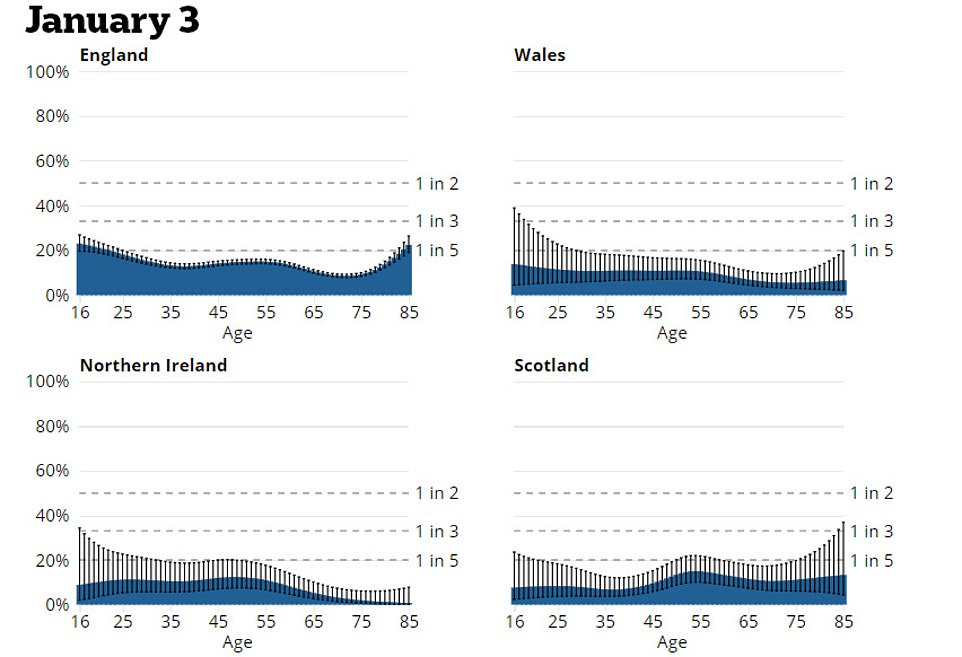 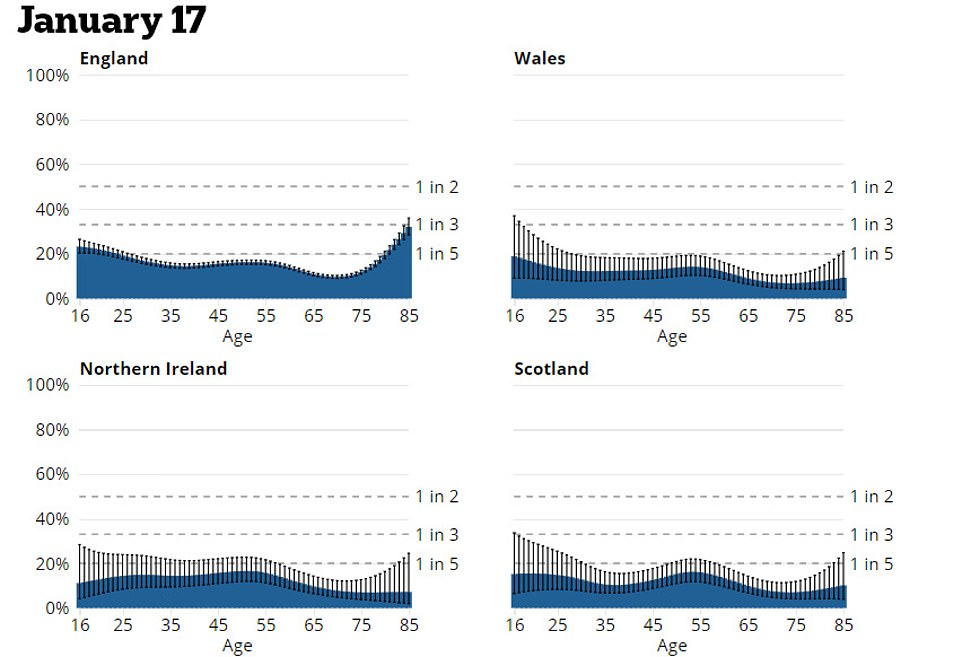 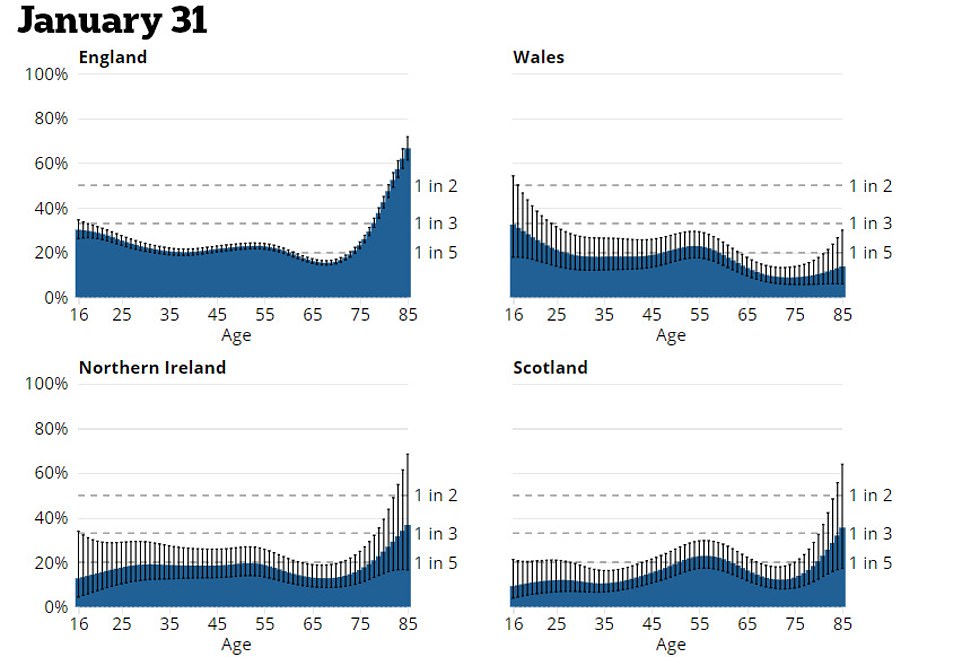 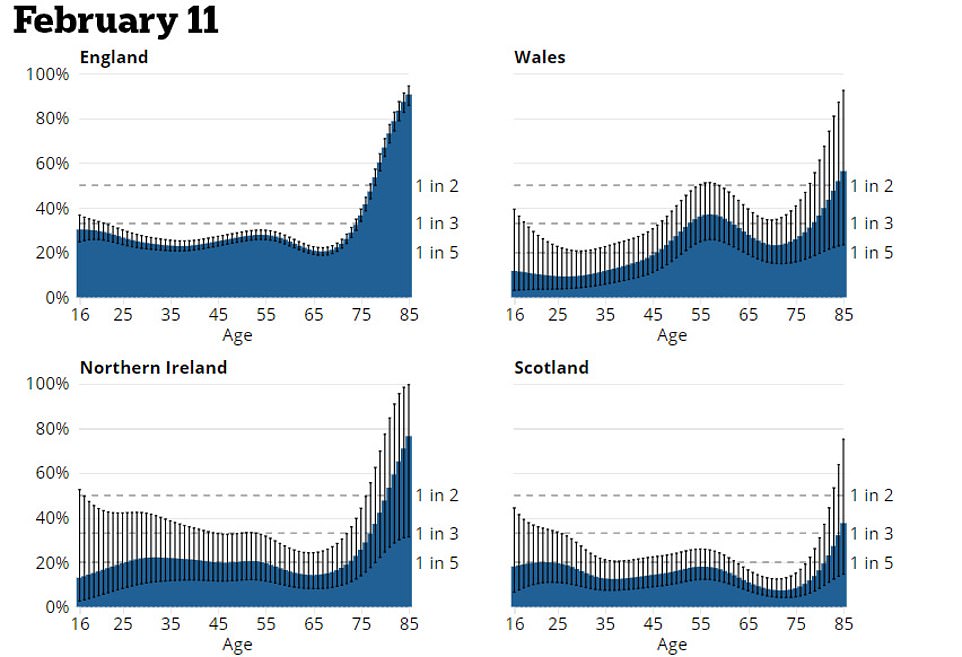 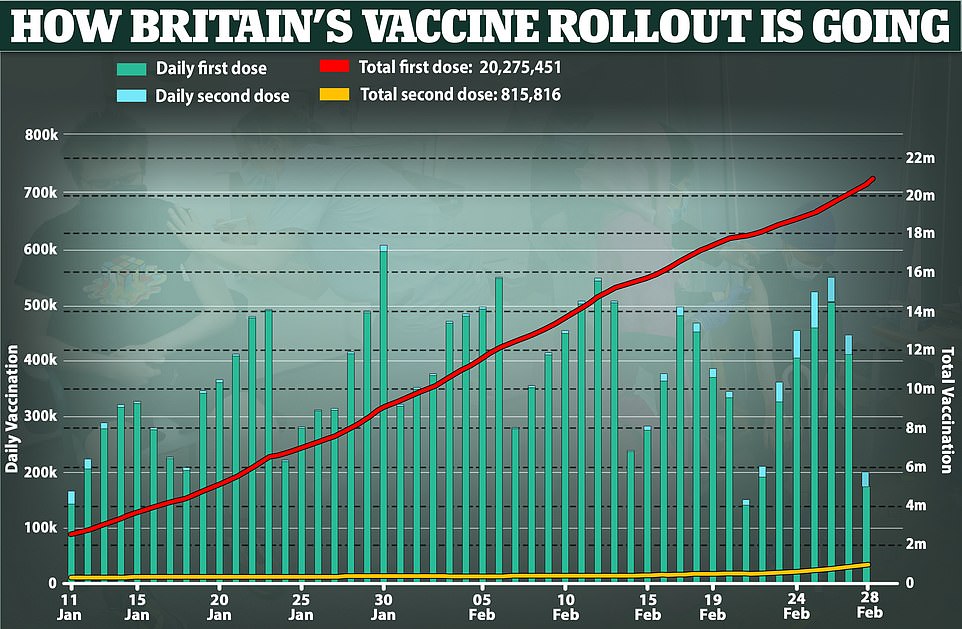 Sarah Crofts, senior statistician for the Covid-19 antibody report, said: 'We're seeing an increase in the number of people who now have Covid antibodies across the UK.

'This is in line with what we would expect at this stage in the pandemic, as more people have had the virus following a period of high infection rates and the vaccination programme.

'The success of the vaccination rollout is likely having an impact on antibody levels, with older age groups prioritised for vaccination reporting high levels of antibody positivity in England.

'The data also shows us that in England, females aged 35 to 49 have a higher antibody positivity rate than males, possibly reflecting differences in occupations.

'As vaccinations continue to be rolled out in the coming months we will continue to monitor antibody levels to measure their impact.' 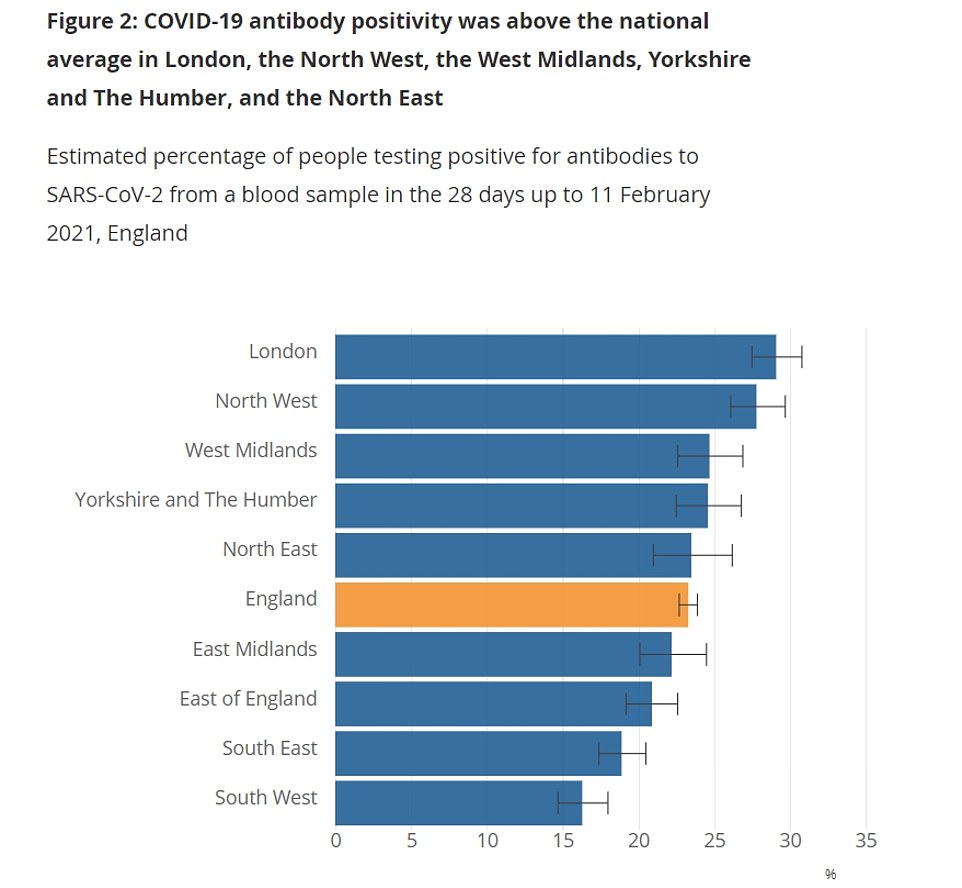 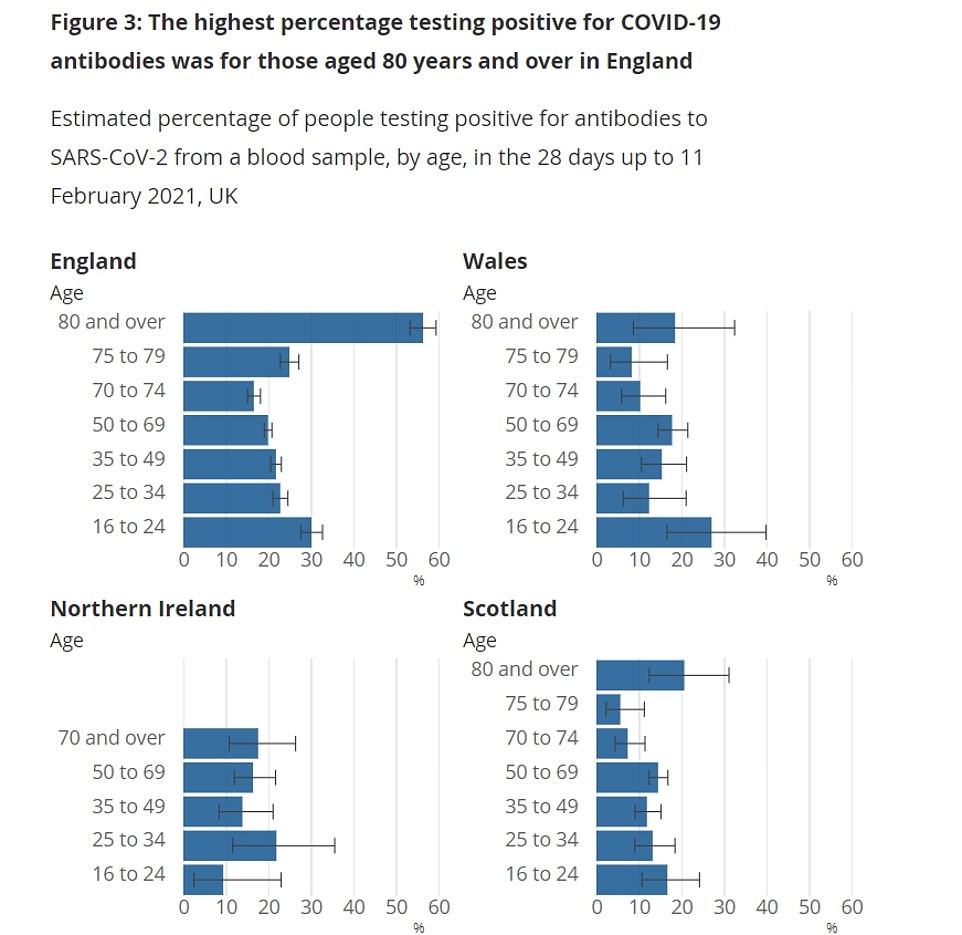 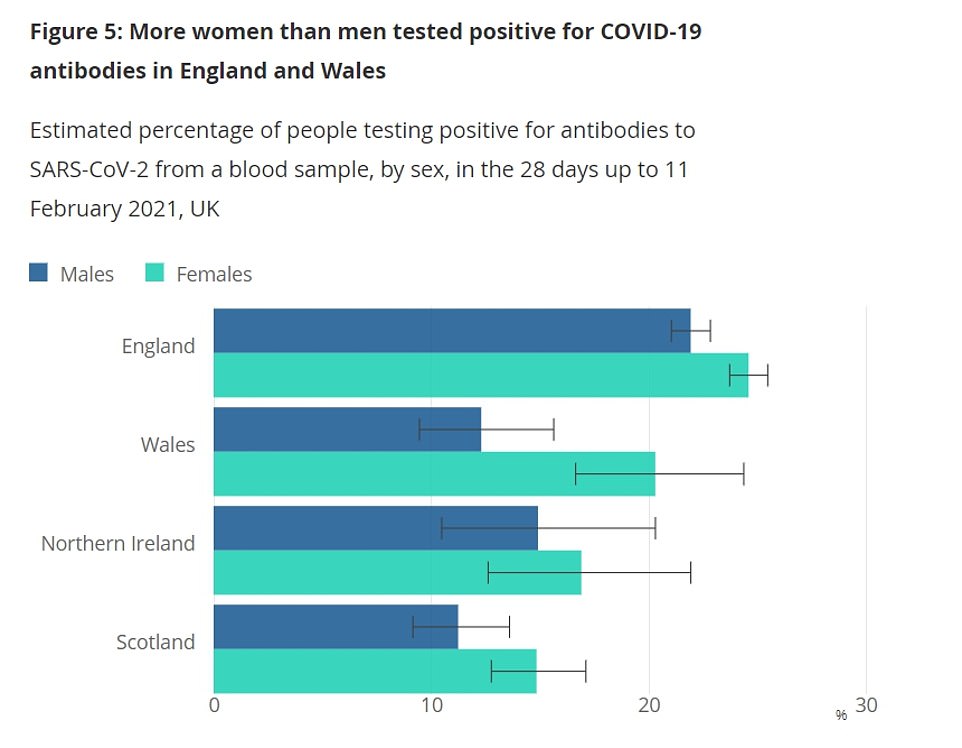 The ONS figures only looked at people in private homes and did not take into account patients in hospitals or residents in care homes.

In England, an estimated 23 per cent of the adult population would have tested positive for antibodies in the 28 days up to February 11, or 10.5million people.

The highest rates were in those aged 80 years and over at 56 per cent, which the ONS said was 'most likely because of the high vaccination rate in this group'.

This was followed by people aged 16 to 24 years, who are most likely to have high numbers of social contacts, where the percentage was 30 per cent.

The ONS said 16 per cent of the populations in Wales and Northern Ireland had the proteins, the equivalent of 416,000 and 236,000, respectively.

Meanwhile in Scotland the body estimated it was 13 per cent, which works out at 586,000 people aged 16 years and over.

In Wales, an estimated 18.5 per cent of people aged 80 and over were likely to have tested positive for antibodies while in Scotland the estimate was 20.7 per cent.

In Northern Ireland the ONS uses different age groups due to small sample sizes and estimates 17.6 per cent of people aged 70 and over were likely to have tested positive for antibodies in this period.