It has been two months since Andi Rizky last saw her uncle Jimmy, a drug offender in Cilegon Prison, Banten province, in person. Since the middle of March, the prison has banned visitors because of concerns about the spread of the coronavirus.

In 10-minute video calls to replace the visits, the pair have discussed the Indonesian government’s plan to release thousands of prisoners.

It has been two months since Andi Rizky last saw her uncle Jimmy, a drug offender in Cilegon Prison, Banten province, in person. Since the middle of March, the prison has banned visitors because of concerns about the spread of the coronavirus.

In 10-minute video calls to replace the visits, the pair have discussed the Indonesian government’s plan to release thousands of prisoners.

Jimmy, 56, constantly asks Rizky to investigate the possibility that he may qualify for the Covid-19 pardon programme. He is very scared of getting infected. But those with short drug sentences or political convictions are not eligible.

Jimmy shares a cell with nine other men. They sleep crammed together, filling the cell floor. Prison food is pretty dire. Three times a day inmates are given a bowl of wrapped rice with scraps of salted fish. Those who can afford it buy bread and instant noodles as additional staples.

In such conditions, fear of the pandemic among Indonesian prisoners and their families has erupted in violent riots in several prisons in recent weeks.

The death of a high-profile prisoner who had coronavirus symptoms has added to those fears. Hermanus Bin Bison, 35, a father of two, was among three indigenous farmers from central Kalimantan jailed in February, after they were accused of stealing fruit from a plantation. The owners of the plantation had themselves been accused of stealing the farmers’ land.

Rights activists had been asking for medical attention for Bin Bison, but he died after spending weeks in overcrowded jail cells.

Prison protests began on 12 March when, as Indonesian Christians celebrated Easter, a riot broke out in Manado prison, North Sulawesi, after a group of drug convicts demanded to be released. Prisoners torched the jail and several were injured. 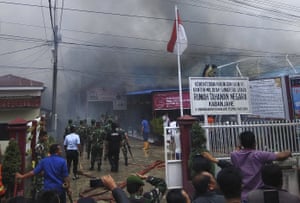 The Indonesian government is processing 50,000 people, including children, for release as concern grows over the spread of the pandemic. As of Tuesday, Indonesia had 9,096 confirmed cases and 765 deaths.

The decision to start releasing prisoners came after Human Rights Watch (HRW) called on Indonesian authorities to curb the spread of Covid-19 in overcrowded prisons. According to the HRW’s data, last month the country’s prisons and detention centres held almost 270,000 inmates, more than double the total capacity.

“First [thing] is to immediately release all those wrongfully held behind bars, including all Papua political prisoners,” said Andreas Harsono, Indonesian researcher at Human Rights Watch.

This plan is seen by some as favouring public officials jailed for corruption or “graft” offences, including Setya Novanto and Suryadharma Ali – men from political circles who were convicted of stealing public funds.

“If we look at the data, the overcrowded prison is because we have a large number of prisoners convicted of drug crimes, not corruption. Logically, if we release the corruptor, the prison will still be overcrowded,” Jakarta Legal Aid director Asfinawati told the Guardian.

A study from the prison Corruption Eradication Commission released on 3 April said those convicted of corruption charges are on their own in cells, such as in Sukamiskin, Bandung, one of the few prisons under capacity, and already enjoy better facilities.

Asfinawati and others want the government to prioritise the vastly larger numbers of prisoners convicted on lesser criminal charges or for political activism. 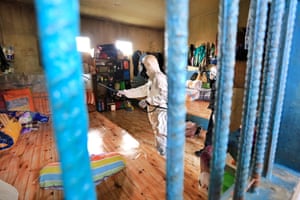 Images received by the Guardian from a source inside Salemba prison, show a large cell with hundreds of people sharing the space, their clothes hanging lengthwise around the walls. There is one toilet.

Since the coronavirus outbreak, Surya Anta Ginting, spokesperson for the Indonesian People’s Front for West Papua, and a political prisoner, has complained about his health. “I have fever and fatigue, I am afraid,” he told Suarbudaya Rahadian, a priest at Salemba prison.

Rika Aprianti, spokesperson of the Directorate General of Corrections, told the Guardian conditions inside Indonesia’s prisons were far better than the reports. She denied all the criticisms, saying the directorate provides adequate health facilities in collaboration with the health ministry. “We are working hard,” she said.

Sixty-three political prisoners, including the “Jakarta six”, detained on treason charges in Indonesia have made a joint urgent appeal to the UN to intervene in the release programme.

Jennifer Robinson, lawyer for the Jakarta Six, said: “These urgent appeals have been made given the imminent threat to the prisoners’ lives from being detained in overcrowded prisons amid the Covid-19 pandemic in Indonesia.

“Their detention is now not only unlawful but life-threatening. All 63 prisoners should be immediately and unconditionally released.”

President Joko “Jokowi” Widodo has said he had agreed to the release of some inmates from prisons considered at risk of rapid Covid-19 transmission, but only with certain requirements. “They cannot be released just like that, of course. There are conditions, and there will be supervision. The [early] release is only for general crime inmates.” 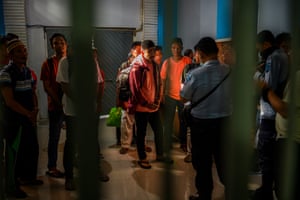 Thousands of prisoners are being released early to prevent the spread of Covid-19. Photograph: NurPhoto via Getty

But more prisoners are also being incarcerated. On 25 April six political prisoners were given jail sentences of between eight and nine months for treason. Their crimes: singing a song, waving a morning star flag, and chanting “freedom West Papua” while protesting at what they say is racism from Indonesian security forces towards indigenous Papuans.

Rahardian is still hoping the government will change its mind on the political prisoners. “I think if we want to apply this for the sake of humanity, these political prisoners should be treated fairly. They should get the offer first, not the corruptors,” he said.

In Depok, Rizky is still waiting for the government’s decision but has little hope. She hopes her uncle stays healthy while in prison, and that the government improves the facility. “If something happens, they will not be able to handle it,” she said.