Every time food goes bad in my fridge and I have to throw it away, I feel guilty. I usually try not to let that happen as I strive not to waste food, and these times are now less and less frequent. Still, invar

Every time food goes bad in my fridge and I have to throw it away, I feel guilty. I usually try not to let that happen as I strive not to waste food, and these times are now less and less frequent. Still, invariably, there will be moments when I buy too much, or I don’t have time to cook and use what’s in my fridge. And there it goes, to the garbage bin, food that took months to be grown, that used up soil nutrients, water and hard work from people or animals around the world. As a vegetarian for many years, I at least have the consolation I don’t throw away meat, that no animals had to die only to end up in the landfill. Food waste is a growing problem in our world, with studies showing that we waste about one third of the food produced for human consumption. It’s a complex problem with no easy solution. The wasted food comes from companies, as well as from individuals, it’s not sustainable and it has damaging effects on the environment. Luckily, in the past years this issue started to be addressed more often, on a large scale (for example in some countries the supermarkets are forbidden to throw away the food that’s about to expire) or on a smaller scale (associations trying to avoid food waste through local actions, and educating individuals to reduce their household’s food waste). There are a few of these associations in the Netherlands, and one of them is Taste Before You Waste (TBYW), which I want to introduce to you today.

TBYW is an initiative founded in 2012 focused on the prevention of food waste, with branches in Amsterdam, Bussum, Utrecht, Bergen and already going international (they started with a branch in Kingston, Canada). Their statement is:

Our aim is to raise awareness about the enormous amount of food that is thrown away and educate people about what they can do to prevent this from happening.

They try to achieve their goal by organising educational workshops, presentations, cultural events, food cycle markets and wasteless dinners. It’s quite a busy schedule, and it’s happening every week, so they require a lot of help, which is provided by an impressive team of volunteers. I find it amazing how much can be achieved by people coming together and putting in hard work for the sole compensation of making the world a better place. Interested in how they do all the work, I paid them a visit during one of the Wednesday Wasteless Dinners. I wanted to see the whole process, not only the dinner itself – I only missed the food collection part. Every week, volunteers ride bakfietsen through the city to collect perfectly good food that otherwise would be thrown away from catering companies and supermarkets and they transform it into a delicious dinner. Vegan dinners, that is – because TBYW also wants to make a statement against the damaging effect that the meat industry has on the environment. 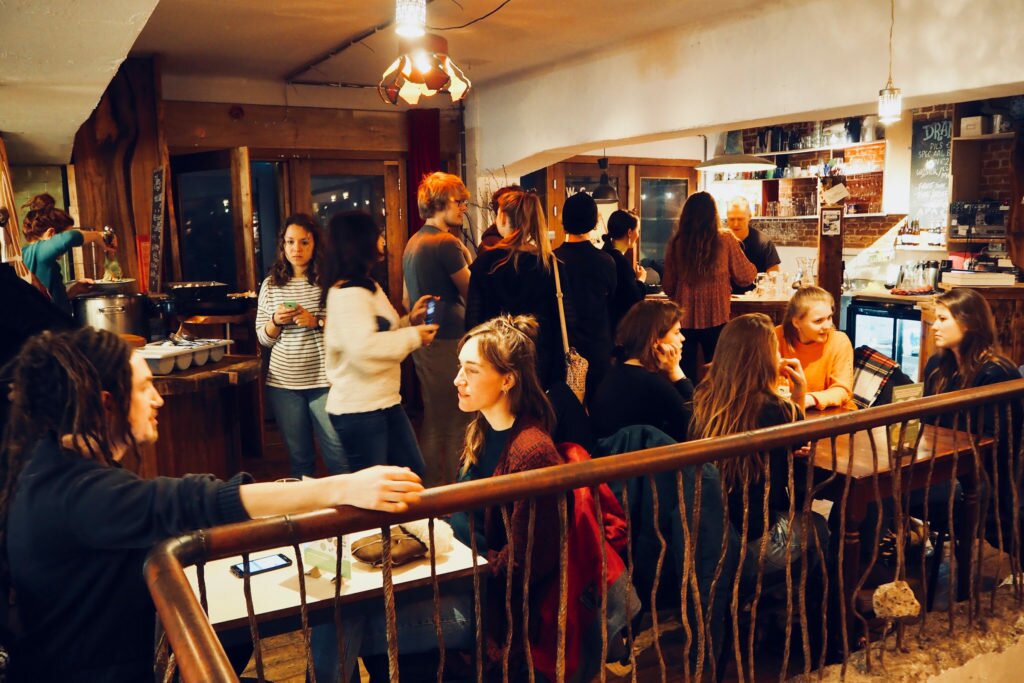 These dinners take place every Monday and Wednesday evening, from 18:30. If you want to be sure you get a seat at the table, be there right on time because the place is as busy as any famous brunch place on a Saturday morning and the food is limited. The menu changes weekly, depending on what food is collected. As for the bill, it’s a “pay-as-you-feel” system, and they use the money for rent, bike repairs and other necessary things.

I arrived there around 16:30 on a Wednesday and the place was packed with busy people running around cleaning, carrying boxes, peeling and chopping. There are three designated cooks (but only one or two are working on preparing dinner) and a little army of helpers, all volunteers. I took photos, I talked with some volunteers and I bothered the chef so much that I ended up getting a small task in the kitchen: squeezing oranges for the vegetables mash.

Most of the volunteers were students, but also people coming from various professions, all interested in sustainability, environmental science and combating food waste. The atmosphere in the room was amazing, they created a great community around this project; there were lots of good energy, good intentions and good laughs. After six, when the doors opened and people started to arrive, the pace became hectic, like in any restaurant’s kitchen, and I was amazed at how they managed to feed so many people (a maximum of 90 guests is allowed for an evening).

As I was busy taking pictures, I missed my chance to sit at a table and I actually didn’t taste the dinner, which was a pity because it looked great. I guess I must go there again another time and see if tastes as good as it looks 🙂

If you want to know more about the TBYW story, have a look at their website and check out their blog, for the latest news.