G20 leaders meeting remotely pledged on Sunday to “spare no effort” to ensure the fair distribution of coronavirus vaccines worldwide, but offered no specific new funding to meet that goal.

The virtual summit hosted by Saudi Arabia was an awkward swan song for Donald Trump, who skipped some sessions on Saturday to play golf, played little attention to other leaders’ speeches and then claimed that the Paris climate agreement was designed not to save the planet, but to the kill the US economy.

G20 leaders meeting remotely pledged on Sunday to “spare no effort” to ensure the fair distribution of coronavirus vaccines worldwide, but offered no specific new funding to meet that goal.

The virtual summit hosted by Saudi Arabia was an awkward swan song for Donald Trump, who skipped some sessions on Saturday to play golf, played little attention to other leaders’ speeches and then claimed that the Paris climate agreement was designed not to save the planet, but to the kill the US economy.

Joe Biden has promised to rejoin the accord on day one of the start of his presidency, giving other world leaders hope that the UN climate change conference at the end of next year will see more ambitious pledges, including from China, to cut carbon emissions by 2050.

Trump’s isolationist diplomacy has allowed China to escape some scrutiny both on its climate and debt forgiveness measures. “To protect American workers, I withdrew the country from the unjust Paris agreement,” Trump told the G20. “The accord was not designed to save the environment. It was designed to kill the American economy.

But the bulk of the summit focused on ensuring that the coronavirus vaccines due to hit the market imminently are available for distribution at affordable prices in poorer countries.

The European Union and the UN say there is a £4.5bn funding shortfall this year that the G20 nations should fill. Countries have so far invested $10bn in the Access to Covid-19 Tools (ACT) Accelerator and its vaccine pillar, the Covax Facility. The two schemes are designed to ensure the vaccines do not remain the preserve of the wealthiest economies.

The UN secretary general, António Guterres, said: “The recent breakthroughs on Covid-19 vaccines offer a ray of hope. But that ray of hope needs to reach everyone. That means ensuring that vaccines are treated as a global public good – a people’s vaccine accessible and affordable to everyone, everywhere,” he said.

“This is not a ‘do-good’ exercise. It is the only way to stop the pandemic dead in its tracks. Solidarity is indeed survival.”

The final communique simply said without any supporting evidence or statistics: “We have mobilised resources to address the immediate financing needs in global health to support the research, development, manufacturing and distribution of safe and effective Covid-19 diagnostics, therapeutics and vaccines.”

It added: “We will spare no effort to ensure their affordable and equitable access for all people, consistent with members’ commitments to incentivise innovation.”

In a sign of the competition for access to the vaccine and national prestige, Russia claimed its vaccine Sputnik V will be much less costly than that offered by Pfizer and Moderna. 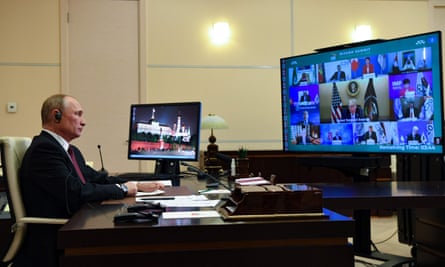 Russia claimed a Pfizer vaccine dose will cost $19.5 and Modena $25-37, putting the true cost at double this since two does will be needed.

The summit also discussed how to help stave off possible credit defaults among developing nations, as their debt soars in the economic catastrophe stoked by the virus. The G20 had already extended a debt service suspension initiative (DSSI) for developing countries until June next year, but Guterres had pushed for a commitment to extend it until the end of 2021.

The draft communique did not offer a firm commitment, as countries wait to see the scale of the international debt crisis. G20 finance ministers will instead examine the recommendation when the IMF and World Bank meet next spring “if the economic and financial situation requires” an extension by another six months. Italy will chair the 2021 G20.

The president of the World Bank, David Malpass, had warned the G20 creditors at the meeting: “We have to avoid doing too little now and then suffering disorderly defaults and repeated debt restructurings like in the 1980s.”

Saudi Arabia, as the summit host, had come under assault from human rights groups in advance, but largely escaped any public criticism by world leaders.

Saudi leaders hit back at those urging them to release female detainees saying it would not take no notice of those trying to interfere in its internal affairs, adding investors were less concerned by these issues as journalists.

Saudi foreign minister, Prince Faisal bin Farhan Al Saud, also insisted that Riyadh be consulted before the US ever returns to the Iran nuclear deal and welcomed Trump administration plans to designate the Houthi movement in Yemen as a terrorist organisation. Yemen is on the brink of famine, the UN warned on Friday.