Recent homicide victim Gabby Petito and her fiancé, Brian Laundrie, who is now a person of interest in her death, had a "toxic" relationship at times and "always had some drama," friends recently told People.

Recent homicide victim Gabby Petito and her fiancé, Brian Laundrie, who is now a person of interest in her death, had a "toxic" relationship at times and "always had some drama," friends recently told People.

The magazine recently spoke to two friends of the couple, who had embarked on a cross-country trip in a converted van before their journey took a tragic turn. Each friend told the news site that the couple, who began dating after meeting at their local Long Island, N.Y. high school, had some good times – but also some bad.

"They had times they were toxic and times where everything seemed a lot more healthy," said Petito’s friend, 23-year-old Alyssa Chen, according to the Wednesday report. "They had very low lows and very high highs. But they really seemed to love each other."

She added:  "When things were good, you'd be like, 'Why can't I have a relationship like that?' When they were bad, you'd be like 'Oh my God, just break up and spare yourself from the drama and everyone else from having to hear about it.'" 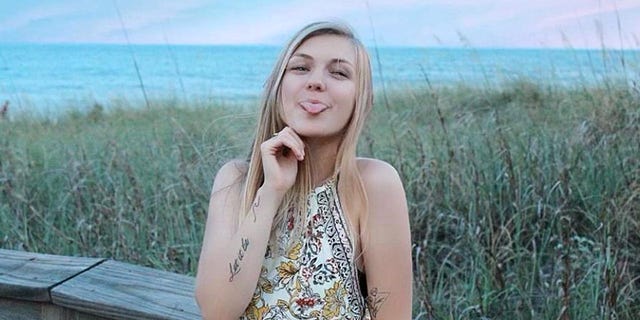 22-year-old  from New York's Long Island was reported on Saturday by her family after her fiancé returned home alone from a cross-country road trip the two had embarked on in early July. Police and Petito's family say the fiancé, Brian Laundrie, is refusing to speak to law enforcement (Steve Petito )

Laundrie, 23, was named a person of interest earlier this month after he arrived home from the trip without Petito, 22. He is believed to have driven the white van from the area of Teton National Park in Wyoming toward the end of August.

Ben Matula, one of Laundrie’s friends, told People the couple "always had drama."

"One minute, they'd be all over each other, the next minute, he'd be like, 'We're fighting,'" Matula said.

Fox News Digital recently obtained Schmidt’s missing persons’ report, in which the concerned mother stated that her daughter was last seen at 7 a.m. on Aug. 30 at Grand Teton National Park. Schmidt wrote in the report that her Long Island home was a "probable destination."

And police records show that on Aug. 12, police in Moab, Utah responded to a report of a domestic dispute between the young couple. In a 911 call placed at the time, a person can be heard telling a police dispatcher that "the gentleman was slapping the girl."

The call appears to contradict a police report in which an officer states "no one reported that the male struck the female."

"The male tried to create distance by telling Gabb[y] to go take a walk to calm down, she didn’t want to be separated from the male, and began slapping him," the report continued. "He grabbed her face and pushed her back as she pressed upon him and the van, he tried to lock her out and succeeded except for his driver’s door, she opened that and forced her way over to him and into the vehicle before it drove off."

One of the officers on the scene wrote that the incident could be "more accurately categorized as a mental/emotional health ‘break’ than a domestic assault."

After the missing persons’ report was filed on Sept. 11, Laundrie would not cooperate with the police investigation, officials said earlier this month. The Laundries’ attorney released a statement on Sept. 14, in which he announced he had advised his clients to remain "in the background."

Charlene Guthrie, who lives directly across the street from the Laundrie family, told Fox News Digital she saw Brian Laundrie mowing the lawn, ride his bike with his mother and appear to go camping with his parents in the days after he arrived alone. Petito had previously been living with the family at their North Port, Fla., home.

Brian’s parents told police on Friday that their son was also missing – and had not been seen since three days earlier.

Meanwhile, the FBI announced on Sunday that they had discovered a body within Grand Teton National Park that matched Petito’s physical description. On Tuesday, a Teton County coroner ruled Petito’s death a homicide in a preliminary autopsy report. The cause is still unknown.

The FBI raided the home on Monday morning in conjunction with local law enforcement. A spokesperson for the FBI’s Tampa Field Office told Fox News their search warrant was still under seal.

According to reporters on the ground, several unmarked law enforcement vehicles descended on the home as officers established it as a "crime scene." Agents took Laundries’ parents, Chris and Roberta, into an unmarked van that was parked at the home before they were led back into the house. Officers could be seen carrying several boxes out of the home and even towing a silver Ford Mustang away.

In a search warrant application filed prior to Monday’s raid, police described how Petito had sent her mother "odd texts" on Aug. 27, one of the final messages the family received from her.

In the message, Petito wrote: "Can you help Stan, I just keep getting his voicemails and missed calls," states the search warrant, filed in the Sarasota County Circuit Court on Friday and made public Monday.

According to the document: "The reference to ‘Stan’ was regarding her grandfather, but per the mother, she never calls him ‘Stan.’ The mother was concerned that something was wrong with her daughter."

The text was one of a dozen grounds that local law enforcement claimed it had for probable cause to conduct a search warrant at the home.

State, local and federal law enforcement are still searching for Laundrie as of Wednesday evening.