His guilt over Kurt Cobain’s death, his scrap with Liam Gallagher, his year getting clean ... the former Screaming Trees frontman reveals why writing his memoirs hurt

By 21, he was in proto-grungers Screaming Trees. Not that he wanted to be: it was his only route out of the “dusty cow town” of Ellensburg, Washington, which he left on the trail of “decadence, depravity, anything, everything”. At 29, eight albums later, he was living in Seattle, chain-smoking in dirty boxers and a stained bathrobe, and watching soap operas when one of his best friends kept phoning.

By 21, he was in proto-grungers Screaming Trees. Not that he wanted to be: it was his only route out of the “dusty cow town” of Ellensburg, Washington, which he left on the trail of “decadence, depravity, anything, everything”. At 29, eight albums later, he was living in Seattle, chain-smoking in dirty boxers and a stained bathrobe, and watching soap operas when one of his best friends kept phoning.

He decided not to pick up. It was Kurt Cobain, who killed himself later that day. There would be many more deaths in the life of Mark Lanegan, a life that is amazingly still going. Now a long-sober 55-year-old, who’s had a second career making solo records as well as ones with Queens of the Stone Age, Isobel Campbell and Greg Dulli (as the Gutter Twins), Lanegan speaks to me twice for this interview: the first time at London’s Roundhouse in December, before playing a gig to support his electronic pop-heavy album, Somebody’s Knocking. 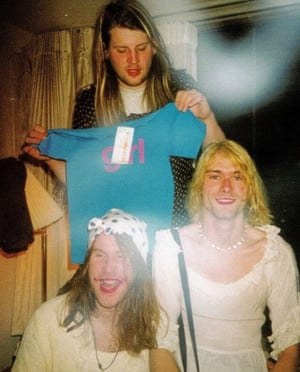 That first encounter is painful: Lanegan doesn’t want to talk about his memoir at all. He’s in front of a chintzy mirror backstage, signing books, peering at the pages through thick glasses. Eye contact is practically nil. The atmosphere thaws briefly when he goes outside to smoke three cigarettes, which he twists in his star-tattooed fingers. “So many times I wanted to stop writing the book, but I had an obligation,” he says. His speaking voice, like his singing voice, is magnificent, heavy and gnarly.

Lanegan had promised a friend, Kitchen Confidential writer Anthony Bourdain, that he would write his memoirs. Bourdain had encouraged him to do a preface to his 2017 lyric collection, I Am the Wolf, loved his writing, and pressed him to do more. “Anthony said, ‘There needs be a level of honesty beyond what you’ll be comfortable with for it not to be some crappy rock autobiography.’ That was the last thing I wanted to do, ever. This might sound ridiculous, but if it’s not literature, I didn’t want to do it.”

Bourdain killed himself in 2018 when Lanegan was only four chapters in. “I had to finish it for him.” He offers a brief flicker of humour. “I had also taken the first third of the advance and couldn’t pay it back.”

Sing Backwards and Weep documents Lanegan’s life up to the late 90s. He didn’t want to include his childhood at all. “But I was told you didn’t just create your musical life in a vacuum. There’s got to be some backstory.” His parents were “products of extreme poverty and cruel deprivation” who became schoolteachers. His mother, Floy, saw her father murdered on her front lawn as a child. She treated her son abysmally. When he broke his femur at eight and was in a full body cast, she dropped a box of hardback textbooks on his head in a fit of rage. Lanegan was more fond of his father, Dale, “a good-hearted, caring man who meant well but could not control me”. 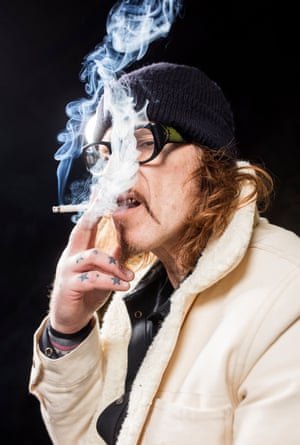 ‘So many times I wanted to stop writing the book, but I had an obligation’ … Lanegan at the Roundhouse, London. Photograph: David Levene/The Guardian

A picture of Iggy Pop in Creem magazine changed Lanegan’s life in high school, opening his eyes and ears to punk. Becoming a musician wasn’t thrilling for him initially, as he never got on with his Screaming Tree bandmates. “I often found myself counting the seconds before I strangled [Gary] Lee [Conner] to death,” he writes of the band’s guitarist and founder. They were signed to Epic Records before the grunge boom, and had a minor hit with Nearly Lost You in 1992, by which point Lanegan had wrested control of the band. But all was not well. “I basically had to stay in a band I didn’t like in order to make money to support my drug habit.”

The drug stories in the memoir are relentless and grim. The heroin that “kept me from dying from the horrors of my severe alcoholism” is mentioned 102 times. During a 1992 Screaming Trees tour, he’s in hospital with an arm infected so badly doctors are considering amputating it. The many stories about sex usually revolve around drugs, too. During this stint in hospital, his drum tech tries and fails to get him his “final blowjob as a two-armed person” in a stairwell from a sex worker, even though Lanegan is on an intravenous drip. He’s mortified by this behaviour now, he says.

Lanegan documents his friendship with Cobain with tenderness. He first sees Nirvana at a community centre gig in 1988 with his friend, Dylan Carson, who soon forms the doom metal band Earth. “I walked back to my depressing hovel with an electricity in my step and a newfound buoyancy of spirit,” Lanegan writes. “I had just experienced something touched by greatness.” 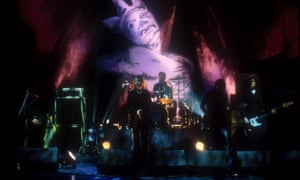 ‘I had to stay in a band I didn’t like to make money to support my drug habit’ … Screaming Trees on the BBC’s Later With Jools in 1996. Photograph: Andre Csillag/Rex/Shutterstock

Cobain and Lanegan become good friends, beginning a project covering Lead Belly songs that runs out of steam. Lanegan repurposes their version of Where Did You Sleep Last Night? for his 1990 debut album, The Winding Sheet. (Nirvana replicated it on their 1993 Unplugged in New York show for MTV.)

He finds it hard talking about Cobain. He hadn’t picked up the phone because he hadn’t wanted to buy his friend drugs, and Cobain was also frequently arguing with his wife, Courtney Love. “I knew him for a long time before he was a superstar. I considered him a cherished little brother. That’s a guilt I’ll always have.”

Liam Gallagher stood there trying to look menacing, like a Z-grade Seven Seagal

It’s a deeply sensitive book, too. There’s a touching scene in which one of Lanegan’s many ex-girlfriends, musician Selene Vigil, asks him, “What happened to you to make you so sad?” and his “grief pours out in torrents”. He writes beautifully about getting into Nick Drake, Leonard Cohen and Tim Hardin, and how moved he was seeing Neil Young play live in 1996, while Screaming Trees were touring with Oasis.

This chapter also involves a hilarious face-off between Lanegan and “bothersome mosquito” Liam Gallagher, who he says was desperate to have a scrap: “Liam continued to stand there like a petulant child trying to look menacing … with all the scare factor of a Z-grade Steven Seagal.”

The book ends in 1997, after the year-long stint of rehab that Courtney Love paid for. “She had a direct impact on my life – I have nothing but love for her.” Would he write about the subsequent years? “No. No way,” he says, remembering the pain of getting it all down. “I wouldn’t put myself through that again.” 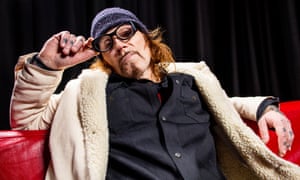 ‘I won’t have to answer any questions any more’ … one of Lanegan’s motivations for penning his memoir. Photograph: David Levene/The Guardian

He’s spent his life trying to distance himself from the days before he got clean, to have some sort of career in music. “I know so many people from that timeframe who don’t make music any more – and I didn’t want to be one.” Why write about those years at all? “Because it means I won’t have to answer any questions any more. If anyone wants to know what this experience was like …” He gestures to the signed pages in front of him, then gives me his one smile of the day. “It’s all there.”

We speak again in early March, Lanegan in his home studio in Burbank, Los Angeles. (He’s lived in California since he got clean.) He’s much warmer and brighter, apologising profusely for our previous meeting: his wife, musician Shelley Brien, was in hospital when we met (she’s better, but he didn’t want to mention it), he was jet-lagged, he hadn’t known I was coming until that day, and he was anxious about the gig, which he considered the biggest of his life: “Playing music in the Roundhouse, to so many people, that had nothing to do with that time period of my book. It meant something. It meant I’d transcended things.”

Released to accompany the memoir, Lanegan’s forthcoming album, Straight Songs of Sorrow, sees him in much more comfortable territory. “Songs usually aren’t about real life for me – they start in some sort of reality, or mood, but then they just come out in another way. But these songs were related to memories because of where I’d just been, looking back, which is something I rarely do. And, for me, writing music is a joyful experience no matter what the content.”

Black humour crackles through the album, as Lanegan describes himself as a wounded Atlas and aged hustler. “Oh, I’m glad you hear that humour. It’s been there for years. I wish people would hear that more often.” He still writes songs such as I Wouldn’t Want to Say, about how pleased he is to have “no heirs to my disease / No one else to curse with this gene”. But he also talks warmly about the next generation of his wider family. “I have three beautiful nephews from my older sister – one is 14, and already better making music than I was at 33. It’s been the blessing of my life watching them grow.”

Does he like getting older? “All the meaningless, stressful bullshit that seems so important when you’re young has ceased to matter. Somebody said to me once, ‘You either get old or you don’t.’ Turns out, I’m quite happy to be getting old.” I wonder whether writing the book and the album has also underlined how much he’s changed for the better. “I wish I could say I’m a perfect example of transformation, and transcendence, but I’m basically still a guy who considers himself a breakfast cook who’s been singing for a while.”

He laughs darkly. “I’m still a deeply flawed person. The difference is, I’m aware of it.”

This article contains affiliate links, which means we may earn a small commission if a reader clicks through and makes a purchase. All our journalism is independent and is in no way influenced by any advertiser or commercial initiative. By clicking on an affiliate link, you accept that third-party cookies will be set. More information.