It is one of the best restaurants in the world, known for its 18-course tasting menus costing north of £300 per person and for spawning a culinary movement based on foraging for ingredients.

Now the two Michelin-starred Copenhagen restaurant Noma, run by feted chef René Redzepi, is preparing to open the doors of a new venture: a burger-and-chips joint.

It is one of the best restaurants in the world, known for its 18-course tasting menus costing north of £300 per person and for spawning a culinary movement based on foraging for ingredients.

Now the two Michelin-starred Copenhagen restaurant Noma, run by feted chef René Redzepi, is preparing to open the doors of a new venture: a burger-and-chips joint.

The move is born out of the devastation caused by Covid-19 as it has swept through the global hospitality industry, leaving closures and ruined lives in its wake. Among the casualties was Restaurant 108, Noma’s sister venture, which closed in September causing industry observers to conclude no business was safe.

Noma’s new incarnation will be simpler, humbler and cheaper – but with the same organic ingredients, creative techniques and attention to detail that have entranced gastronomes for the past 17 years. “It’s a pretty huge change, and a big moment for me,” Redzepi told the Observer.

The burger joint, POPL, from the Latin word “populus” meaning people, will open on 3 December after a temporary pop-up during the summer attracted long queues for its beef and veggie burgers. 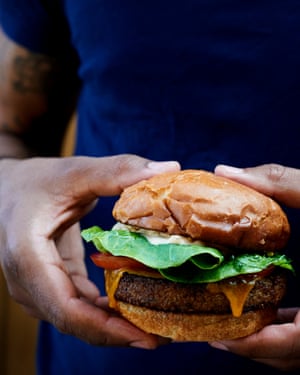 Instead of requiring prepaid reservations for months in advance, POPL will be open for walk-ins and takeaways. Rather than an ambitious tasting menu – including mahogany clam decorated with seaweed fronds and salt-preserved unripe gooseberries – it will offer beef, veggie and vegan burgers, chips and a few sides.

And instead of costing more than £300 for a meal, the burgers are priced at just over £17, plus £6 for fries. Takeaways are cheaper.

But, said Redzepi, “we’ve put the same amount of energy and dedication and care into a burger”. The beef comes from free-range cattle raised on organic farms on the shores of the Wadden Sea national park. The veggie and vegan burgers are made from fermented quinoa. A side salad is served with a buttermilk and rose dressing.

Redzepi, who opened Noma in 2013, has been a chef for almost three decades. “All that time I’ve been cooking at the finest restaurants, the best of the best. With that came very tight and organised kitchens, reservation lists, small dinner services of a maximum of 60 people, and hype.

“This summer, when we could go out on the streets again, we thought OK, we’ll do something that is a common denominator for everyone. What is the number one food that everyone likes? A burger.”

On the first day of the pop-up, the Noma team had prepared 300 meals. “We thought that would be the busiest day. We had no idea of the local support. It was crazy. We were serving an average of 2,400 burgers a day. Roughly we had as many guests during that five-week pop-up, only open four days a week, as we did in six years of operating Noma,” said Redzepi.

“I didn’t know it was important to me that everyone could have access to our food. I loved the fact that I was seeing people that I’d known at school waiting in line, I’d see all my neighbours, family members, distant cousins – everybody came, everyone wants a burger. This was one of the most fun things I’d ever done.”

In the past decade, Noma has been named best restaurant in the world four times by Restaurant magazine; last year it came in at number two.

There are three Noma books, two feature-length films and a Noma documentary series. An academic paper has been written about the New Nordic cuisine spearheaded by Redzepi. A dedicated fan base of “Nomaheads” follow the chef around the world to eat dishes such as an edible butterfly created in part from a paste of currants, gooseberries, and crushed ants.

The new burger joint “is a significant change for us”, said Redzepi. “And we have no clue how it’s going to work out in the long run.”