How Umran Malik became an icon for young Kashmiri cricketers

Dedication and luck drafted the 21-year-old into India's T20 World Cup squad, much to the delight of those back home.

Jammu, Indian-administered Kashmir – A group of youngsters are playing cricket on a small ground along the Tawi River in Gujar Nagar locality of Jammu city early in the morning.

A 12-year-old boy runs while holding a tennis ball tightly in his right hand.

The ball, bowled fast and with all his energy, goes past the batsman and hits a stone that marked the wicket.

Jubilated, the bowler walks a few yards towards the batsman with a sense of pride and says: “It’s not easy to play Umran Malik’s pace.”

The comment drew a cheer and laughter from those around them and was also evident of a Kashmiri star’s rise in the world of cricket.

Son of a fruit seller, Malik was recruited as a net bowler by the Sunrisers but when Thangarasu Natarajan was ruled out of the tournament due to COVID, Malik was drafted into the squad.

He became an instant star. And as he regularly clocked more than 150kmph (93mph) during the few IPL matches he played for the Sunrisers Hyderabad, he drew praise from many, including Indian captain Virat Kohli.

“This tournament throws up talent every year. It’s good to see a guy bowling at 150 [kmph]. It is important to understand the progress of individuals from here on,” Kohli said. 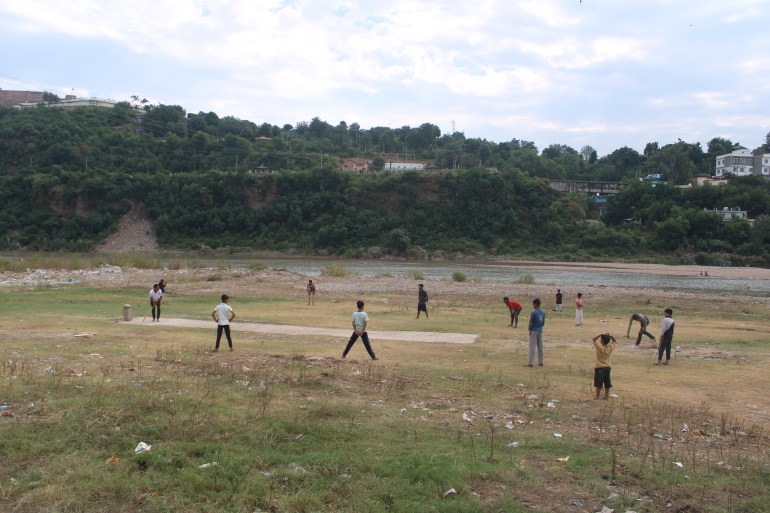 He added that the pool of fast bowlers being strong is “always a good sign for Indian cricket and whenever you see talent like this, you are going to have your eyes on them and make sure you maximise their potential which is already being seen at the IPL level”.

His pace attracted admiration from experts of the game as well.

Former West Indies fast bowler Ian Bishop said Malik has got all the qualities of a really “potent weapon”.

“Malik has raw pace, which is hard to come by. It’s a rare commodity,” he said on ESPNcricinfo.

Indian commentator Harsha Bhogle said Malik was not “just a tearaway” and looked like a “proper bowler” who needed to be looked after.

In 2018, Malik was picked for the Jammu and Kashmir under-19 team. He went on to play in Syed Mushtaq Ali Trophy, a domestic Twenty20 cricket championship in India, and the Ranji One-Day Trophy.

Though the Sunrisers Hyderabad did not have a good season in this year’s IPL – finishing last on the table – for Malik, the turnout opened new opportunities.

He was told to stay back in the UAE after being picked as a net bowler with India’s national team for the T20 World Cup.

As a young boy, Malik was a regular on the field that the youngsters were playing and enacting his feats.

Here, the patch, dotted with potholes and rubbish, often doubled up as a grazing ground for sheep and buffaloes.

“We are so happy to see our son play in the IPL and now he has been selected as a net bowler for the World Cup. He has made all of us proud,” his father, Abdul Rashid Malik, told Al Jazeera at their home in Jammu.

“He was always passionate about cricket. The only thing he loved was cricket and we never stopped him from playing,” he said. “We just pray that he plays for the Indian team now and make his country proud.” 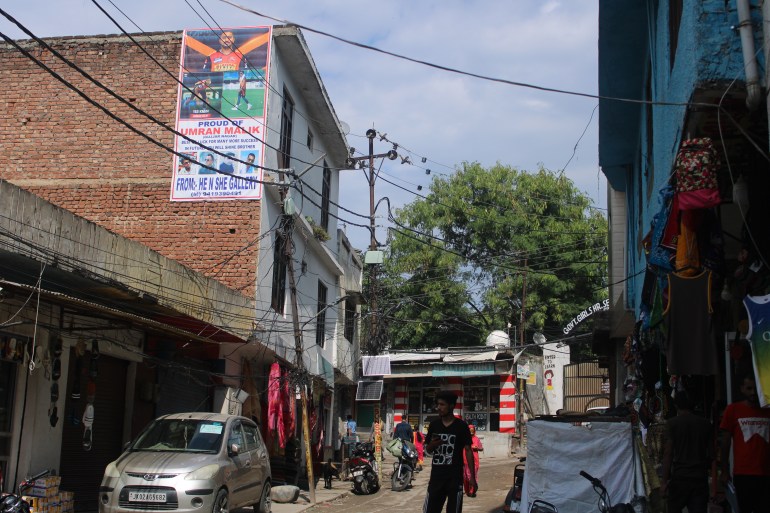 Malik is the youngest of the three children and the only boy. He grew up in a joint family in Gujar Nagar and was pampered not only by his parents and two sisters but by all his relatives, his family said.

Since early childhood, he was drawn into cricket and would travel across Jammu district to play tennis-ball tournaments.

Malik dropped out of school after grade 10 to focus more on cricket.

“We never scolded him for anything, at least for playing cricket even if he would play all day,” his father said.

“He would always say that ‘one day I will play for India’, so we decided to let him play and live his dream,” he said, adding that he never wanted his son to help him at his fruit stall or work there.

In addition to his family and friends, Malik’s IPL performance is also bringing joy to young cricketers in the region.

Banners with his photos and reading “proud of Umran Malik” have been put up in the market in his hometown.

His IPL performance has brought in new energy among the youth playing cricket in his locality. They now want to bowl fast like Malik or work hard and follow in his footsteps to make it to the IPL.

Locals in Gujar Nagar told Al Jazeera that since Malik’s IPL stint, there has been a sudden increase in the cricketing activities with more and more boys coming out to play cricket.

There is also jubilation at the Jammu and Kashmir Cricket Association (JKCA) office.

Sheikh Shariq – a young, six-foot two-inch tall fast bowler from Saida Kadal area in Srinagar who has practised alongside Malik in Jammu – is all praise for his colleague.

“Umran is a huge inspiration for us,” Shariq told Al Jazeera at the JKCA office in Jammu where he was part of a training camp for an upcoming domestic cricket tournament.

“It gives us hope that if we work hard we too can make it to the big stage.”

Others feel Malik’s selection has brought new energy among players and children who play cricket in the region.

“It boosts our confidence that Umran, who used to play at this ground, is today part of the Indian squad,” said another cricketer who had played with Malik in the under-23 domestic team.

Anil Gupta, a JKCA member, told Al Jazeera that Malik was now a “matter of pride” for all of them, particularly JKCA which “nurtured” him.

Gupta added that Malik was always motivated and very passionate about his game and he busted the myth that Jammu produces good batsmen and Kashmir produces good fast bowlers.

“It’s sheer hard work that he has reached the top despite very short exposure of first-class cricket,” Gupta said before adding that passion for cricket across the Himalayan region will only increase after such feats.

“He is soon going to become an icon for the youngsters of Jammu and Kashmir.”

Nishanta Bordoloi, fielding and fitness coach at the JKCA, said that on a Sunday morning, as he was entering the sports ground, he saw a few children playing cricket nearby and overheard one of them saying he was Umran Malik.

“That’s the inspiration we need right now,” he said. “That excitement in youngsters to bowl quick and follow someone who is their own, it brings a lot of excitement and passion among players.”