'It's like losing a brother': Irrfan Khan remembered by Asif Kapadia

When Kapadia cast a 34-year-old Khan in The Warrior, it ignited both men’s careers – and sparked a lifelong friendship. Here, the director pays tribute to a man of ‘immense dignity and charisma’

I first met Irrfan Khan 21 years ago in a cheap beach hotel in Mumbai. I was 28 and casting my debut film, The Warrior, about a conflicted enforcer in feudal India. None of the actors I’d seen were right. I’d tell them I wanted to make a western, a mix of Robert Bresson and Sergio Leone, and their eyes would glaze.

They weren’t interested in doing a movie without songs or romance or much dialogue, filmed far away in Rajasthan and the Himalayas. A film which wasn’t typically British and was shot in Hindi, but wasn’t totally Indian, either.

I first met Irrfan Khan 21 years ago in a cheap beach hotel in Mumbai. I was 28 and casting my debut film, The Warrior, about a conflicted enforcer in feudal India. None of the actors I’d seen were right. I’d tell them I wanted to make a western, a mix of Robert Bresson and Sergio Leone, and their eyes would glaze.

They weren’t interested in doing a movie without songs or romance or much dialogue, filmed far away in Rajasthan and the Himalayas. A film which wasn’t typically British and was shot in Hindi, but wasn’t totally Indian, either. 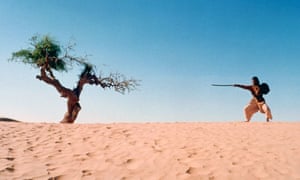 Neither British nor Indian … The Warrior. Photograph: Ronald Grant

Irrfan walked in the room and in that moment I knew he was right. He had this incredible presence and beautiful face and unusual puffy eyes. He loved world cinema, got the tone and references and liked the challenge of telling a story without words.

Afterwards I said to my friend Amit, with whom I was casting: “He looks like someone who’s killed a lot of people, but feels really bad about it.” The only problem was that he seemed such a wonderful, warm guy we had to toughen him up a bit. That was part of the fun. He was 34 then and got better-looking and more in shape as he aged.

We went to the desert and the mountains for the shoot and he saw snow for the first time. It was very low-budget and pre-digital, so there was no playback or wriggle-room. You just watched him do a take, then went: “That was amazing! OK … moving on!”

Before that, Irrfan had been thinking about quitting acting because he was getting bored. He hadn’t been offered a role that allowed him to demonstrate his great gift, which was to say so much with just a glance. He elevated simple lines to brilliant cinematic moments, could make you feel something very complex and emotional by doing very little. He was a real movie star.

Over the years, The Warrior cast and crew stayed in touch and had reunions, which is quite unusual in this business. There was a real connection, and Irrfan – soulful, tall, elegant, slightly otherworldly – was our spiritual leader.

Even before he was famous, he had immense dignity and charisma. Some actors can be quite ordinary when they’re not done up. He didn’t have to be in costume. Even when people didn’t know who he was – in a shop, or walking down the street – they would stop and stare. Once we were on a flight together, in economy, and every five minutes stewardesses came up to ask if he needed anything. 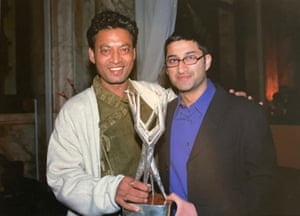 The Warrior won Baftas and the Sutherland award for best first film at the London film festival; the next day we went to my mum’s house in Hackney for lunch. Miramax bought the US rights but Harvey Weinstein put the film on a shelf for years which killed it. And it was disqualified from the foreign-language category of the Oscars – that upset Irrfan, too; he wasn’t without ambition.

But we both got noticed and he went on to make movies with Danny Boyle, Michael Winterbottom, Wes Anderson and Ang Lee. I worked with David Fincher recently and asked him how he’d come across me. He said: “Oh, my best friend came over with a DVD and told me I had to watch it.” That turned out to be Brad Pitt, and the DVD was Senna. I think Pitt had been told to watch it by Irrfan, when they worked together on A Mighty Heart.

No matter what the movie, I always felt Irrfan was the best and most believable thing in it, because he was so honest – everything he did had soul and truth. As his career took off, he remained the same. He’d always been outward-looking and international, which is why he could so seamlessly work across so many genres and countries.

Fame never changed him. We’d try to meet up whenever I was in India or he in London. We’d talk movies and go to the British Museum and Primrose Hill and our kids would play football together. When he was having treatment here I’d visit him in hospital and we’d head to the local park or cafe, or he’d come to our home. He talked about his illness in a way I’ve never before heard anyone discuss cancer. He was extremely inquisitive and wanted to understand exactly what was going on. 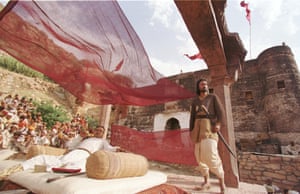 Outward-looking … on the Warrior set in India. Photograph: Jeremy Sutton-Hibbert/FilmFour

In 2018, I invited Irrfan and his eldest son to an early cut of my Diego Maradona documentary. “Why did you make this film?” he asked in the edit suite a few days later. “What does this film say about you?” His notes were really tough! He wanted me to make the film more personal; as much about me as about Maradona. They were good notes. Irrfan knew me well enough to say he didn’t like that cut - but he didn’t want to tell me in front of 50 people.

He returned to India and we’d message from time to time. Sometimes he’d reply and sometimes his wife, Sutapa. It’s difficult when a friend lives on the other side of the world. The other week I found some pictures from that first casting session in the dodgy hotel from 1999 and I sent them to him. Sutapa wrote back saying: “Oh, he’s wearing his lucky black shirt.”

In the spring Irrfan sent me a photo of his new calf. He was always telling me to come and visit his farm outside Mumbai; I never got there. You always think there’s time and then you run out of it. He and I were so in sync for a while, partly I think because the film we made was slightly out of step with the rest of the world. It didn’t neatly fit in, and neither did we.

It’s like losing a brother. He used to ring me up at 2am and I’d be worried something bad had happened. “Oh no,” he’d say, “I just missed you and wanted to chat.”