Daryll Leslie, 31, was swimming with a friend at the Isle of Lewis in Scotland on Sept. 4 when his wedding ring fell off.

A man who lost his wedding ring – which had been handmade by his wife – was thrilled to get it back on his second anniversary.

Daryll Leslie, 31, was swimming with a friend at the Isle of Lewis in Scotland on Sept. 4 when the ring fell off, according to SWNS.

"We decided to swim in this little cove which was really beautiful," Leslie told SWNS. "As we were walking back to the car, I realized I didn’t have my wedding ring."

"I looked at my hand and I was gutted," he added. "It’s kind of a material thing, but it’s even more important because me and my wife spent a day making each others’ wedding rings. It’s not easily replaceable." 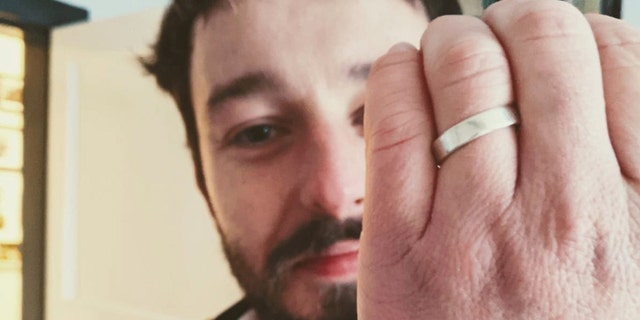 Daryll Leslie, 31, was swimming with a friend at the Isle of Lewis in Scotland on Sept. 4 when his wedding ring fell off. (SWNS)

Leslie told SWNS that he didn’t immediately tell his wife Carey, who was out of town on a spa weekend with her friends, that he lost his ring.

"Carey messaged me asking how are things and I said 'Great, couldn’t be better,’" Leslie recalled, though he told SWNS that he did eventually let her know what happened.

"I was obviously disappointed but knew there was no point in me giving him a hard time," Carey told the news agency.

After he lost his ring, Leslie turned to social media for help tracking it down. Stephen MacLeod, 31, lives on the Isle of Lewis and is a metal detectorist, who saw Leslie’s posts and agreed to help.

MacLeod told SWNS he didn’t think it was likely that he would find the ring, but he and a friend still went out in search of it anyway. 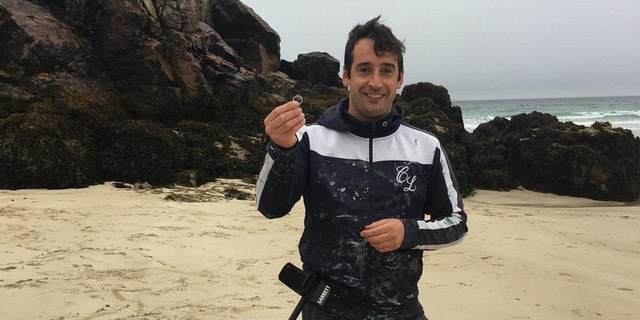 Stephen MacLeod, 31, lives on the Isle of Lewis and is a metal detectorist who found Daryll Leslie’s wedding ring after Leslie’s lost it last month. (SWNS)

"We were looking for over an hour and there was nothing happening," MacLeod said. "I thought it was long gone, even while we were looking, we didn’t really expect to find it."

However, he did eventually get a signal that it had found gold.

"I knew straight away before I started digging that was it," MacLeod said. "It was an amazing feeling."

After finding the ring, MacLeod arranged for it to be delivered back to Leslie in Edinburgh, according to SWNS. 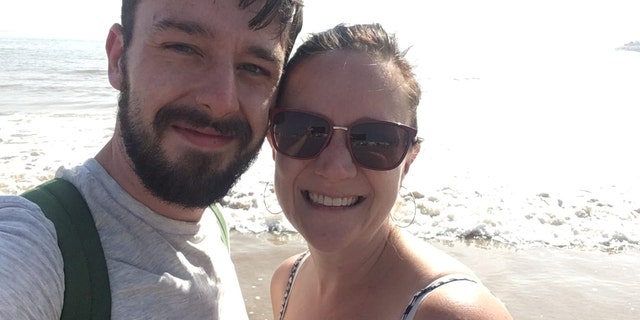 Daryll Leslie (left) and Carey Leslie (right) were married on Sept. 28, 2019, and on their second anniversary this year, Leslie got his wedding ring back. (SWNS)

Leslie and Carey were married Sept. 28, 2019, and on their second anniversary this year, Leslie got his wedding ring back.

"It was a nice surprise and we hadn’t even planned it," Leslie said.

Carey said: "I didn't think there was any chance we would get it back. I was really over the moon when it was found because I knew Daryll would be so happy."

"What a lovely thing to do, to go out and look for it for someone you don't know," she added.