Microplastics found in greater quantities than ever before on seabed

Scientists have discovered microplastics in greater quantities than ever before on the seabed, and gathered clues as to how ocean currents and deep-sea circulation have carried them there.

Microplastics – tiny pieces of plastic less than 5mm in size – are likely to accumulate most densely on the ocean floor in areas that are also biodiversity hotspots, intensifying the damage they may do to marine ecosystems, according to the research.

Scientists have discovered microplastics in greater quantities than ever before on the seabed, and gathered clues as to how ocean currents and deep-sea circulation have carried them there.

Microplastics – tiny pieces of plastic less than 5mm in size – are likely to accumulate most densely on the ocean floor in areas that are also biodiversity hotspots, intensifying the damage they may do to marine ecosystems, according to the research.

The international research team found up to 1.9m pieces in a thin layer near the seafloor covering just 1 sq metre. The discovery suggests that deep-sea currents act as conveyor belts that concentrate microplastics in hotspots, similar to the “garbage patches” visible on the surface in parts of the Pacific.

Those same hotspots are also key breeding grounds for marine life, such as filter-feeding ascidians, or “sea squirts”, which are particularly prone to microplastic ingestion, along with sponges and cold water corals.

Polychaetes, or “bristle worms”, live within the upper layers of sediment and actively mine it, and so can ingest buried microplastics that are decades old, showing that even when the pollutants fall to the seafloor they are not out of harm’s way and still have an impact on key ecosystems. These biodiversity hotspots are also home to various fish species. 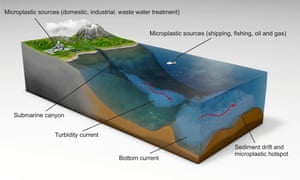 How microplastics get into the sea and are then carried along by deep-sea currents. Photograph: Ian Kane/University of Manchester

Dr Ian Kane, of the University of Manchester, was lead author of the study published in the journal Science. He said fragile ecosystems fed on nutrients and oxygenated water brought by the same ocean currents that carried microplastics.

“The real problem is plastics that are sat around in the environment [which] can accumulate various pollutants and toxins on their surfaces,” he said. “There’s evidence that some of these toxins may be released when in the guts of organisms, and then you have the effect of the food chain, whereby small creatures are eaten by bigger creatures, and eventually you get to our fish stocks and you’re eating a nice piece of tuna containing decades-old microplastics contaminated with all sorts of nastiness.”

Little research has been done so far on the impacts of microplastics on marine life, but there have been some concerning findings. For instance, a recent study found hermit crabs exposed to microplastics seemed less able to select new shells to live in.

Most of the microplastic found in the study came not from the breakdown of larger pieces of plastic material, which previous thinking has suggested as the leading source of microplastics, but from textiles and clothing. That is an important finding, according to Kane, as it shows that much more can be done to prevent these tiny particles making it into the sea in the first place.

“We can all make a difference by choosing not to buy fast fashion, which has a short shelf life in the shops and in our wardrobes, or by choosing to avoid plastic packaging and so on,” he said.

The most powerful interventions, however, would need to come from the government and waste and water treatment industries, such as using filtration to prevent microplastics reaching the sea in the first place, Kane said. “These filters exist, for example graphene filters developed at the University of Manchester and new nanocellulose filter developed in Finland … But it’s really at the governmental policy level that these need to be implemented.”

Jacqueline Savitz, from the conservation group Oceana, said: “This study shows why estimates of plastic pollution that have focused only on what is observed at the surface so severely underestimate the problem. 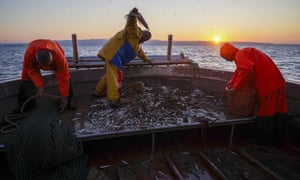 The Tyrrhenian Sea, where the research took place, is host to key fisheries. Photograph: Andrew Medichini/AP

“This relationship between microplastics hotspots and biodiversity hotspots compels us to act to turn off the plastic production faucet – it shows that cleanups will never suffice and that recycling has done little to address the problem. Sadly, the petrochemical industry is doing just the opposite, and it will fall on policymakers to stem the flow of plastics into our oceans.”

The team consisted of researchers from the universities of Manchester and Durham, the National Oceanography Centre, the University of Bremen in Germany and Ifremer in France. They collected sediment samples from the seafloor of the Tyrrhenian Sea and examined them in conjunction with calibrated models of deep ocean currents and detailed mapping of the seafloor. In the laboratory, the microplastics were separated from sediment, counted under the microscope, and analysed using infra-red spectroscopy to determine the plastic types.

The area of sea examined is also host to key fisheries, such as bluefin tuna, swordfish and grouper.