Thursday: Kevin Rudd accuses Scott Morrison of following a ‘Trumpian playbook’. Plus, send us your stories of good neighbourly behaviour

Good morning, this is Richard Parkin bringing you the main stories and must-reads on Thursday 30 April.

Good morning, this is Richard Parkin bringing you the main stories and must-reads on Thursday 30 April.

Kevin Rudd has accused Scott Morrison of hypocrisy over his calls for a beefed-up World Health Organisation, just months after Morrison railed against bureaucratic organisations such as the United Nations becoming too powerful. Morrison had warned of the dangers of elevating “global institutions above the authority of nation-states” in a recent speech, which relegated his latest comments to little more than a “thought bubble”, according to Rudd. The former prime minister also attacked Morrison’s decision to commission a government review into Australia’s engagement with global bodies as following a “Trumpian playbook”, “with a preconceived and quite cynically driven political agenda”.

The UK now has Europe’s second-highest Covid-19 death toll after revised figures included an additional 4,419 victims, lifting its tally past Spain to 26,097. The US passed one million positive infections overnight, but a trial of the antiviral drug remdesivir has reportedly showed “a clear cut, significant, positive effect” for patients, in news that buoyed global stock markets. It comes against a stark warning from the International Labour Organisation however that 1.6bn workers globally – nearly half the international workforce – are in “immediate danger of having their livelihoods destroyed” by the economic fallout from the coronavirus.

Australia’s chief scientist has warned against claims of breakthroughs or sudden cures to the Covid-19 pandemic, urging instead for the public to rely on evidence-based reports. An Australian Institute of Criminology report has found more than 200 listings for purported coronavirus vaccines, personal protective gear and antiviral drugs for sale on the darknet, with some products selling for as much as $24,598. And a major rental affordability study has found that just nine of 69,960 properties surveyed would be affordable by single jobseekers if the boosted Covid-19-related welfare payments were to be ceased. 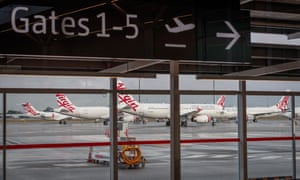 Creditors for Virgin Australia could be facing steep losses of almost $2bn, with some predictions suggesting major backers such as the Anglican Church could receive as little as 7c in the dollar for millions invested as recently as last year.

Barack Obama’s team watched Julia Gillard’s misogyny speech whenever they were “really annoyed” with Tony Abbott, one of the president’s senior advisers has revealed. Ben Rhodes, the former deputy national security adviser, has also described how Obama “went way off the script” to blast the Abbott government for climate inaction.

A Sydney laundry is facing heavy criticism after standing down staff, despite 183 of its 236 workers being ineligible for jobkeeper wage subsidies. Union representatives have called on the government to “fix the faults in the jobkeeper scheme”.

An independent report recommending a ban on fracking in the environmentally sensitive Kati Thanda-Lake Eyre Basin was kept quiet by the Queensland government. Gas company Santos has been granted exploratory rights in the region. 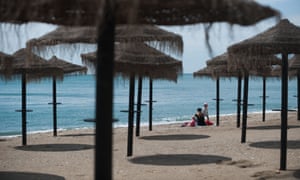 Beaches in Spain, such as this one in Málaga, have reopened but tourists cannot return. Photograph: Jesús Mérida/SOPA Images/REX/Shutterstock

Spain and Germany have dampened hopes of a tourism-driven revival post Covid-19, with Spain ruling out the early reopening of its tourism sector and Germany extending its travel warning outside of the country until mid-June.

Brazilian president Jair Bolsonaro has sparked fury for seemingly dismissing the nation’s spike in coronavirus deaths, after replying to a journalist: “So what?” after hearing 474 people had died that day. Brazil’s death toll has now passed 5,000.

A giant of Bollywood, Irrfan Khan, has died aged 53, following complications with an infected colon. He was one of the nation’s most celebrated actors. Indian prime minister Narendra Modi called his passing “a loss to the world of cinema and theatre”.

Czech prime minister Andrej Babiš is at the centre of a conflict of interests row, after a leaked EU report suggested a company owned by Babiš, the nation’s second richest man, has been receiving millions worth of EU funds. 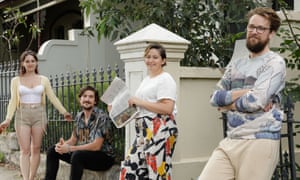 From left: Sydney neighbours Marie, Alex, Laura and Nick do the weekend quiz together during the coronavirus lockdown. Photograph: Carly Earl/The Guardian

From homemade biscuits, to shared quizzes; balcony parties to offers of grocery runs: the threat of the coronavirus may have forced us apart, but for many it’s also bringing neighbours closer together. Guardian Australia staff share their favourite tales of iso-getherness.

Interminable hours indoor and unrequited lust are classic tropes of the period drama. But entering week six of Covid-19 lockdown, Jo Tovey has discovered a newfound sympathy, nay affinity, for the heroines of Jane Austen and their lives.

The latest rental affordability snapshot reveals the continuing precarious nature of housing for those on low incomes. And with rents as high as they’ve been for five years, Greg Jericho says it’s a stark reminder of the need for more social housing.

The Mudgee corner store and the jobkeeper payment: in this episode of the Full Story podcast, reporter Paul Karp explores the kinks in the jobkeeper system, and we speak to one small business owner whose life has been turned upside down.

The Mudgee corner store and the jobkeeper program

Full Story is Guardian Australia’s news podcast. Subscribe for free on Apple Podcasts, Spotify or any other podcasting app. 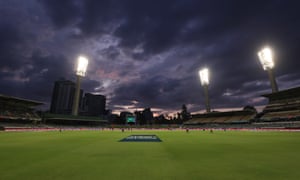 Cricket Australia is one of several Australian sporting organisations struggling to deal with the impact of Covid-19. Photograph: Paul Kane/Getty Images

For years Australian sport has celebrated spiralling broadcast deals and player wages, but Covid-19 has exposed many codes’ financial foundations as precarious at best, writes Scott Heinrich, and now the chickens of fast-living are coming home to roost.

It’s been dubbed “Project Restart” – but when, if at all, is it feasible to restart the Premier League? There’s been talk of a six-week sprint – a “festival of football” – but the devil, writes Ed Aarons, is as ever in the detail.

Business magnate Kerry Stokes has urged Scott Morrison to mend relations with China, reports the West Australian, warning there could be catastrophic economic consequences if the dollar spiralled. Three-quarters of Australian households want to see politicians and senior public servants take a Covid-19 20% pay cut, according to polling firm Dynata and the IPA in the Australian. And NSW minister Stuart Ayres handpicked five of 15 sporting grant recipients, according to a freedom of information request obtained by the Sydney Morning Herald. Twelve of the 15 successful grants went to Liberal seats.

The first meeting of creditors of Virgin Australia will be held with administrators, Deloitte. The meeting will be conducted online only.

The funeral service for Senior Constable Lyn Taylor, who was killed alongside three colleagues after being struck by a truck, will be held in Melbourne.

How do you ensure physical distancing when there’s a major celebration on the horizon? Well, if you’re Sweden, and not technically under lockdown, the answer is simple: dump tonnes of chicken manure at suspected gathering sites. It’s a stink offensive: that should stop those pesky revellers.