Moving skilled migrants to the Netherlands comes with its challenges

Moving skilled migrants to the Netherlands comes with its challenges Consultancy.eu Consulting firms in the Netherlands are on a roll. According to data from the Dutch association of management consu

Consulting firms in the Netherlands are on a roll. According to data from the Dutch association of management consulting firms, the industry saw average growth of 8% last year. Against a backdrop of the broader booming demand for talent, growth at some consultancies is however now being strained by a drying up talent pipeline. Making use of a ‘highly skilled migrant’ (HSM) through a managed service approach could well be a rewarding solution.

A highly skilled migrant, also known as a 'knowledge worker’, is a foreign national who makes a significant contribution to the knowledge economy in the Netherlands. They are typically professionals with a tertiary education earning above a minimum income of around €3,300 (for those aged under 30) and €4,500 (migrants above the age of 30). For highly skilled migrants, one benefit of choosing Holland as a place to work and live is the fact that they enjoy the Netherlands’ 30% tax ruling, a (currently controversial) rule from the Dutch government which allows tax exemption for up to 30% of an expat’s salary.

Consulting firms in the Netherlands are increasingly tapping into foreign resource pools, in particular in fields for which there is scarcity in the country, including digital, programming, cybersecurity and IT outsourcing. However, “engaging highly skilled migrants comes with its challenges and calculated risks,” says Peter Bloemsma, an expert at The Relocation Company. Bloemsma for long classified as a highly skilled migrant himself, having spent more than two decades abroad across three different continents. 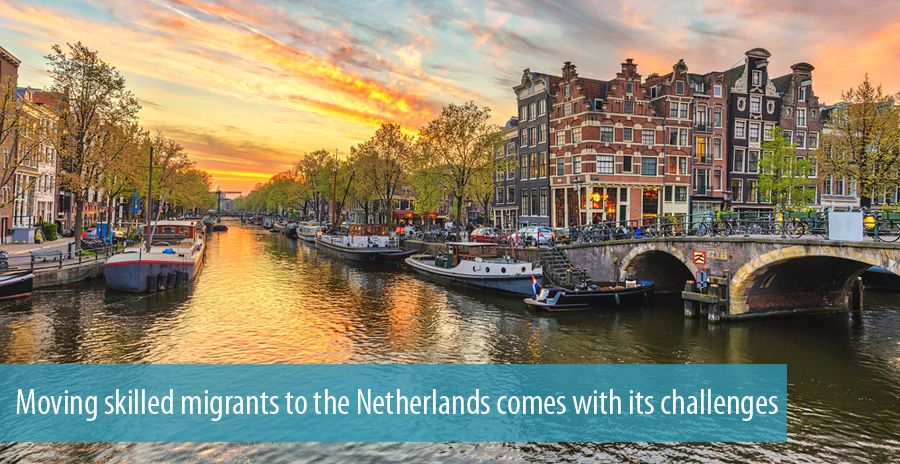 “In the consultancy business, utilisation rate is a key performance indicator. With new foreign hires it might take longer to be billable compared to local hires.” Bloemsma elaborates: “In order to hire a knowledge migrant, a consultancy firm needs to be a recognised sponsor of the Dutch Immigration Office (IND). This could take up to 3 months after approval. Then, a residence permit needs to be setup for non-EU employees – this comes with a processing time of between 6 and 12 weeks.”

Once the formalities have been completed, high skilled migrants then enter the next phase of the integration process. A range of next challenges can then surface. Bloemsma: “Upon arrival, an expat is often offered a temporary accommodation and he/she needs to be registered at the city hall as soon as possible to obtain a Social Fiscal Number (BSN). Without a BSN in the Netherlands, no health insurance can be taken, no application can be done for the for the 30% tax ruling [a special ruling for skilled expats] and kids are not allowed to attend a public school.”

Finding housing has in recent years become a major challenge, in particular in in-demand cities and business hubs such as Amsterdam, The Hague, Utrecht and Rotterdam. Another challenge commonly encountered by expats is schooling. Although most expats tend to look for (private) international education, there is according to the relocation expert a growing trend among expats to enrol their children at local Dutch schools. “In some areas – it depends where people live – this will depend on the availability of internationals schools and the quality of local options.”

After spending a few months working in the Netherlands, expats then commonly turn to arguably the largest challenge to manage. The highly skilled migrant may then want to bring over his/her spouse and family, or if they are already in the country, the spouse may aim to integrate in the local workforce. Making sure this step is overseen effectively, both from a business as well as personal perspective, is key, remarks Bloemsma. “A lot of research has been conducted to the success factors of an international move, among others finding that if a trailing partner/family is not happy in the new country, there is a big chance the employee contract will be terminated early.”

In the eyes of Bloemsma, the entire process from beginning to end could be streamlined by working with a so-called Destination Service Provider (DSP). These are companies that have the knowledge and networks to assist with all legal, human resource, administrative and practical relocation matters. For employees, they take all necessary steps out of their hands, and provide settling in support to spouses and family. For companies, “An employer could for instance (partly) outsource the time-consuming immigration paperwork to a Destination Service Provider, enabling human resources to focus on more strategic tasks.”

“In this way all stakeholders will be relieved from the often stressful things that come with an international move, which will be instrumental in making the integration of the foreign employee and his/her family in their new home country a success,” Bloemsma concludes.