January. Whether it was dry, vegan, low-calorie or gym-fuelled, I for one am glad it’s over. A month closer to spring. A month closer to finishing the six-month project that has me working so hard that I’ve not posted a restaurant review in almost three weeks. Partly because I’ve barely had time to eat, but mostly because I’ve definitely had no time to write. Which is why I find myself frantically struggling for inspiration on a Sunday afternoon, mainlining cappuccinos in the café down the road.

I asked Mr Foodie what I should title this article. “The Lion, the Hummus and the Aperitivo,” he said. I love it but my SEO doesn’t. So instead I simply bring you three new restaurant concepts for the new year in Amsterdam: the Lion’s Head Brew Bar (actually open for three months but like I said, I’m behind on stuff), Eastern Mediterranean chain NENI, and Cecconi’s Aperitivo Hour at Soho House. If I’m going to write my first review in three weeks, I might as well write three at once…

I ended up at the Lion’s Head Brew Bar pretty much by accident. A friend was having birthday drinks at a bar down the road, and we were looking for somewhere to eat beforehand. Touting itself as a South African-German mashup, the Lion’s Head’s menu features Bavarian schweinshaxe (pork knuckle) and kölsch beer on the one hand, and pork belly with kimchi and fruity watermelon wheat beer on the other. Plus a smattering of American buffalo wings and Tex-Mex nachos thrown in for good measure. It was either going to be genius or disastrous. 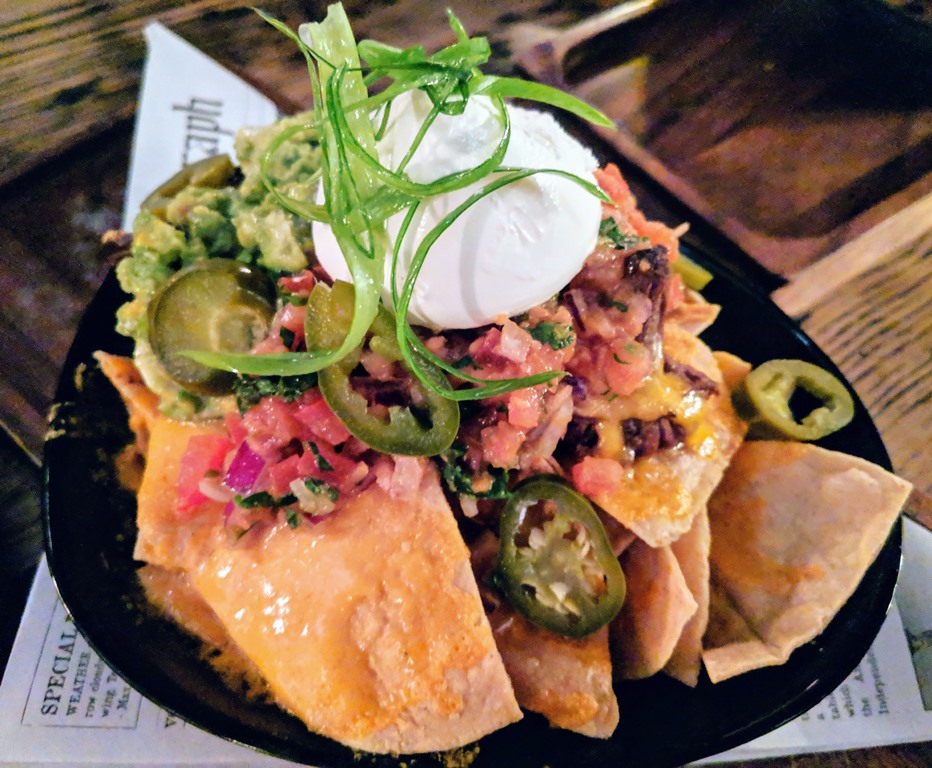 Fortunately, it was the former. The nachos alone were a revelation in a city where I’ve had so many bad experiences I’d more or less given up ordering them. Excellent slow-cooked chilli beef was layered in with homemade tortilla chips, pleasantly chunky guac, sour cream, and a few jalapenos for the spice fiends amongst us. Meanwhile, the hot wings were coated in the Lion’s Head’s own buffalo sauce – excellent, but the addition of ranch or blue-cheese dip would’ve been the proverbial cherry on the cake. Steak and eggs were tender, smoky, creamy and full of flavour. And even the pumpkin ravioli was a pleasure to eat, with good bite to the pasta, savoury notes from the sage, and a little crunch from the toasted nuts on top. My only criticism was of the salmon, which tasted solely of the nori seaweed it was wrapped in and the miso jus it was swimming in – the salmon flavour was lost completely. But the other stellar dishes and the moreish home-brewed beers more than made up for it. 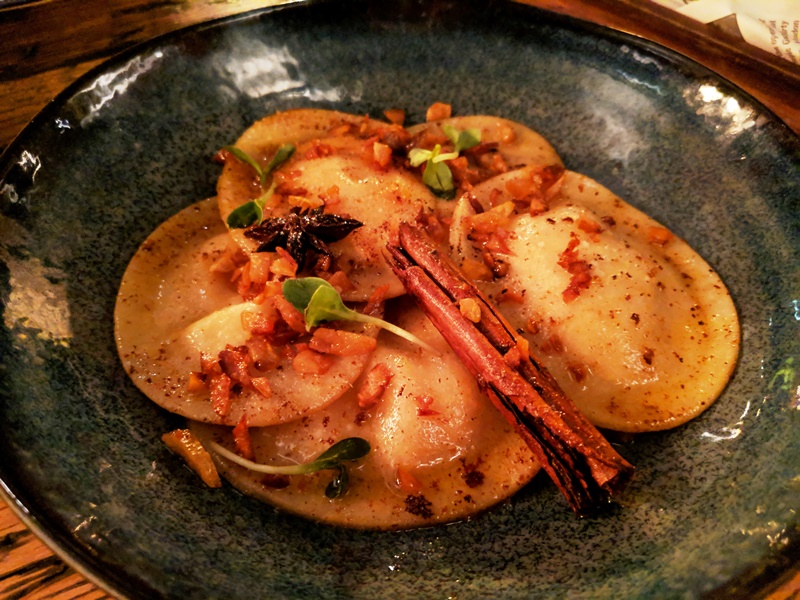 Dinner came to €43 each, including a tip that we were happy to leave – the service was outstanding, too. The Lion’s Head Brew Bar hasn’t come up in any press releases I’ve received, and nor do they appear to be doing any PR. It’s refreshing (and increasingly rare) to simply stumble across a restaurant that I’ve never heard about, and discover a team of people doing great things. One to watch.

In stark contrast, NENI’s PR is almost inescapable. With a preview tasting, a press dinner and an opening party – all of which obviously hosted at NENI’s enormous premises in the converted Citroën garage – there can’t be a food writer in Amsterdam who hasn’t eaten there. And it’s not even officially open yet. But none of that detracts from the quality of what NENI is offering. 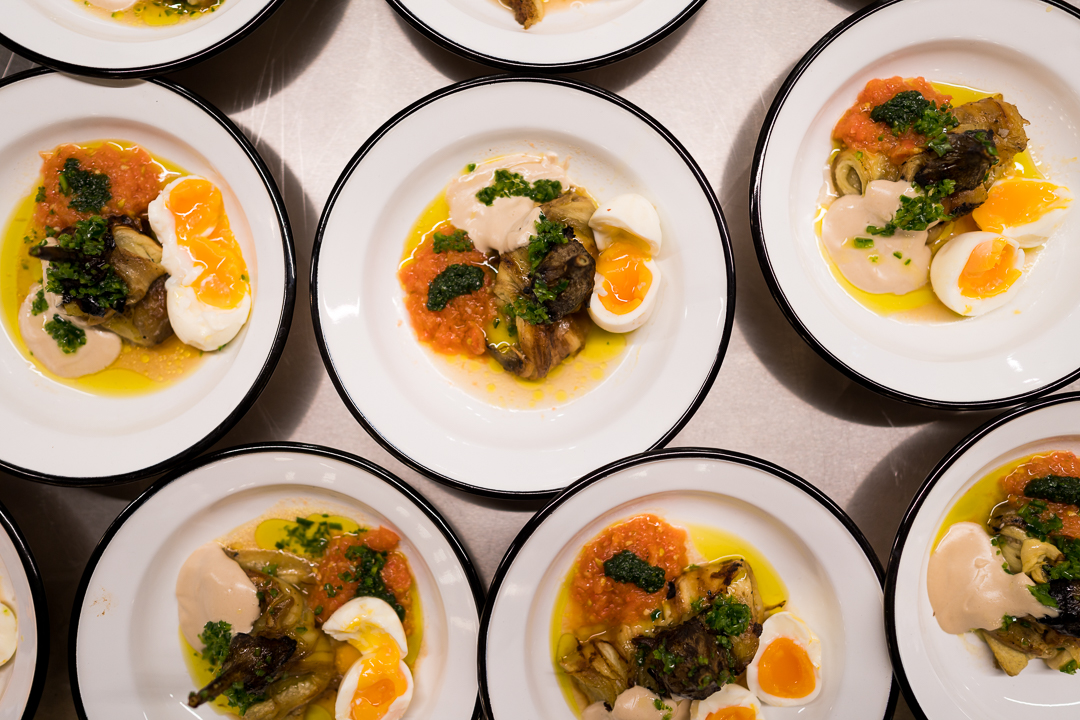 The owners (Haya Molcho and her four sons) have Israeli, Romanian and Spanish roots, so you can expect an Eastern Mediterranean party on your palate. The hummus is silky smooth, the aubergine smoky and grassy with olive oil, the seabass crudo laced with pomegranate – even the olives are outstanding. The veg-led dishes were definitely the highlight: try the sabich – think the Israeli answer to focaccia, studded with aubergine, eggs, tahini, a tangy mango sauce and a fresh, fragrant, herb-rich salsa. Try also the generous fish cakes with char-grilled vegetables. I was less impressed with the meat dishes, including the chicken shawarma which didn’t elevate itself any higher than its snack-bar counterpart. Prices are very reasonable, the service friendly, and the atmosphere… well, the atmosphere was a little hard to imagine without 200 journalists and bloggers swarming around. But that might be reason enough to make the trek back to Stadionplein and find out.

Last but not least, those who have not been fortunate enough to score a table at the hottest Italian ticket in town (and that includes me) will be pleased to hear that Soho House’s restaurant and bar Cecconi’s is: a) open to non-members; and b) now offering an Aperitivo Hour Monday through Wednesday between 3 and 6 pm.

Order a typically bitter Italian cocktail – think Negroni or vermouth & tonic – and you’ll be treated to free plates of aperitivo-style snacks as and when they emerge from the kitchen. We tried the zucchini fritti (fried courgettes) with a mayo-based dipping sauce, simple margarita pizzette, and pillow-soft meatballs in tomato sauce. The latter were perhaps my favourite, but all were well executed – as was my Negroni. 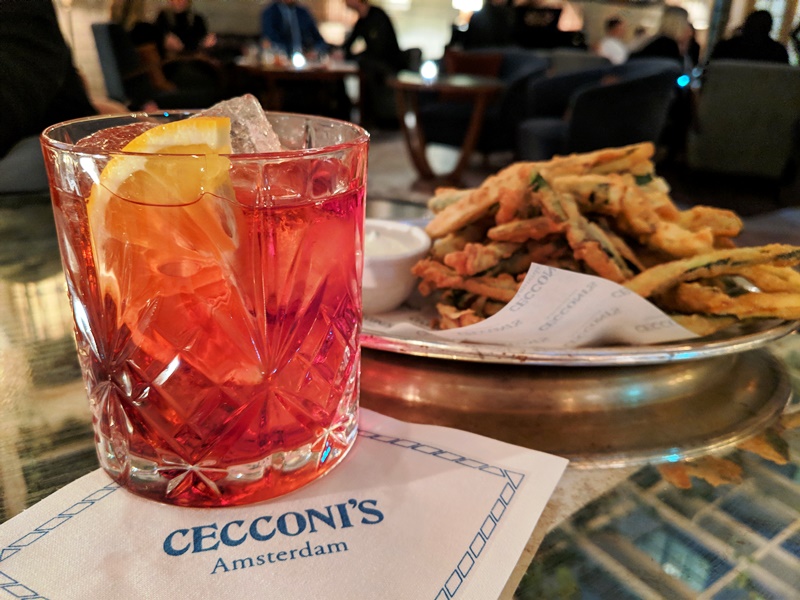 I’ve still not ben to Cecconi’s for dinner, and I’ve heard mixed reports – some say the lobster pasta is to die for, others that the dishes lack soul. So if any of you actually have managed to get a table, let me know what you think in the comments below!

Disclaimer: I was invited to both NENI and Cecconi’s as a food writer, and didn’t pay for my meal/aperitivo.