New South Wales Labor leader Jodi McKay has criticised the state government for not acting sooner on the coronavirus-stricken Newmarch House aged care home, and said families were not always given the choice to transfer Covid-19 positive residents to hospital.

Anglicare, the company in charge of Newmarch House, announced on Tuesday that five residents of the western Sydney facility had died over a 24-hour period, bringing the death toll to 11. Some 34 residents and 22 staff members have tested positive to Covid-19.

New South Wales Labor leader Jodi McKay has criticised the state government for not acting sooner on the coronavirus-stricken Newmarch House aged care home, and said families were not always given the choice to transfer Covid-19 positive residents to hospital.

Anglicare, the company in charge of Newmarch House, announced on Tuesday that five residents of the western Sydney facility had died over a 24-hour period, bringing the death toll to 11. Some 34 residents and 22 staff members have tested positive to Covid-19.

Anglicare CEO Grant Millard said the facility had been told to expect more deaths this week.

“We were warned on the weekend to expect a number of very difficult days this week with residents passing. We do anticipate more deaths,” he told ABC on Wednesday.

The home began testing for coronavirus on 11 April after a carer who worked part-time at the facility tested positive to Covid-19. The NSW chief health officer Dr Kerry Chant said the carer had extremely mild symptoms such as a “scratchy” throat and worked five shifts at the home and two at a western Sydney disability service before she realised she was sick. It’s understood she did not have symptoms while still working.

NSW premier Gladys Berejiklian said at a press conference on Wednesday she was concerned at the lack of information given to family members of residents since the beginning of the outbreak.

“I can confirm last night the minister for health contacted the federal minister for aged care to express our government’s concerns at the lack of communication between the centre’s operators and the relatives,” she said.

“I can’t imagine how stressful that [must be] … and we made our concerns known to the federal minister.”

However, the state opposition said this was too little too late.

“It’s 19 days … that these families have been battling to get proper care to ensure that they are informed about the care provided for the people they love, and the health minister only picked up the phone last night. The premier has not called the prime minister,” she said.

“This is a NSW Health issue as well as a federal government issue.”

McKay said family members were not always given the option to transfer their loved ones to the hospital.

“I’m also struggling to understand why 10 of the 11 deaths have actually occurred here at Newmarch House and not in a hospital environment … we have ICU capacity, we have ventilators … But why aren’t residents being transported to ICU or to healthcare facilities?”

Anthony Bowe, whose 76-year-old mother has tested positive for Covid-19, said he went days without an update from Newmarch House staff.

“My mum went on oxygen three days ago and I found out about it [yesterday].

“You would think I would get a phone call saying ‘your mum’s on oxygen, do you want her to stay here or to transport her to hospital?’ But that didn’t happen.”

Bowe said he purposefully did not fill out an end-of-life care plan for his mother when she was diagnosed, afraid if he did he wouldn’t be contacted at all.

“If I sign that and say ‘OK this is the strategy’, I’m less likely to get a phone call than I am now,” he said.

Bowe said his mother is now doing better and on her request decided not to transfer her to hospital unless her condition deteriorates. 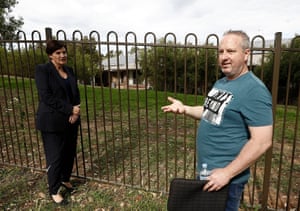 A spokesman for Anglicare said the decision on when to transfer a resident to hospital, and who was able to make that decision, was “very complex”.

He referred Guardian Australia to comments from the NSW chief health officers.

“Any patient can be transported to hospital. I can’t comment on the specific cases but in general, there’s a conversation with the individual patient about what care they would like to have delivered,” Chant said when asked about Newmarch house at a press conference Wednesday.

“It may be most appropriate to manage onsite, or people may want to stay at home and be supported. But really, those care decisions are a matter for, primarily, the patient. But also and often involving discussions with the family, about what is in the best interest and the wishes of that person in terms of their care.”

Federal aged care minister Richard Colbeck told Nine’s Today show on Wednesday he has had talks with the NSW government and management of the Anglicare-run home following Tuesday’s news.

The minister said a teleconference call of medical experts would be held on Wednesday morning to discuss what further action could be taken around infection management at the facility.

“It gets your heart when you find out five people have died in one afternoon – in a 24-hour period,” Colbeck said. “The residents there are getting the best possible care.”

But family members said the facility’s communication is poor and the care of residents has slipped.

They have written an open letter to Anglicare CEO Grant Millard with 10 demands, including a hotline be created to get regular updates on their relatives’ health.

“On a consistent basis phones go unanswered for hours at a time and over days. This has to change. Newmarch phone lines are our lifeline to our sick parent. The sick residents are often too unwell to answer their own landlines,” the letter read.

Millard said in a statement on Wednesday that family members of Covid-19 positive residents were receiving daily phone calls.

“Since the outbreak on Easter Sunday, we have made sure to send daily emails to families of our residents at Newmarch House,” he said.

“And for every one of our residents who are sadly Covid-19 positive, we are in regular phone contact, at least once a day, with that resident’s designated representative.”

“We have stepped in precisely because of that reason. [We have] made it absolutely clear that there has to be clear, consistent and ongoing communication with the families,” he said.

“On our watch, in our time, we will make sure that they are communicating with all of the families.”

“I understand the frustration of families, particularly when it relates to communications around these issues. And in relation to communication … [at] our request, the Older Persons Advocacy Network held a meeting [Tuesday] night towards improving the communication between residents and their families, and the government has also asked OPAN … to put workers on-site to assist families with communication with their loved ones.”

Since the outbreak began, Bowe and other residents have said care inside the home has declined. Bowe’s mother allegedly waited up to two hours after calling for help, and in a separate incident did not receive an adequate medical check after a fall in the shower.

Previously, the federal government offered “unlimited workforce support” and activated a “surge workforce” inside the facility after Anglicare admitted it was struggling to staff the facility, with 55 workers forced to self-isolate.

The facility has since announced it has returned to a full schedule of workers.

Family members’ letter also demands relatives be allowed some visitation, suggesting “up to two family members to stand outside the resident’s closed window and speak on the phone”.

On Wednesday Millard told ABC family members could not be allowed in the home but the facility was considering “window therapy” similar to what was suggested in the letter.

Newmarch House has been in lockdown since 23 March, before the outbreak began, meaning many residents have not seen their loved ones for more than five weeks. Even residents who have remained coronavirus-negative have said the isolation has been mentally challenging.

“My nan told us over the phone that ‘All I do all day is long for that door to open and just to see a face’, ” said Nicole Fahey, whose 76-year-old grandma is in the home.

“Her best friend is in the home, she’s well into her 90s and she wasn’t well anyway. So every day nan’s trying to personally ask about her best friend, but she can’t get any answers.”

Anglicare said according to the “best advice available” it would be some weeks before the home was clear of coronavirus.

The latest fatalities have pushed the NSW death toll from coronavirus up to 41, and the national toll to 88.