NK Jemisin: 'It’s easier to get a book set in black Africa published if you're white'

The three-time Hugo award winner is one of the biggest names in modern scifi. She talks about overcoming racism to rewrite the future

In 2018, NK Jemisin became the first writer ever to win three consecutive Hugo best novel awards for science fiction and fantasy. Her first award had been in 2016, for her novel The Fifth Season, and its two sequels, The Obelisk Gate and The Stone Sky, won in the following years. Yet speaking on the phone from her home in coronavirus-hit Brooklyn, Jemisin says she never thought she’d be published. “I honestly didn’t think I had a chance. You just didn’t see characters like me in fiction,” she says.

Growing up in Mobile, Alabama and New York, Jemisin was an avid reader, making up her own stories from the age of eight, but the lack of black women writing science fiction and fantasy, the genre she loved, made her believe it wasn’t for her. “We were all exposed to nothing but white dude fiction, occasionally young white women fiction, and if that’s how you’ve grown up, then that is what is normal.”

In 2018, NK Jemisin became the first writer ever to win three consecutive Hugo best novel awards for science fiction and fantasy. Her first award had been in 2016, for her novel The Fifth Season, and its two sequels, The Obelisk Gate and The Stone Sky, won in the following years. Yet speaking on the phone from her home in coronavirus-hit Brooklyn, Jemisin says she never thought she’d be published. “I honestly didn’t think I had a chance. You just didn’t see characters like me in fiction,” she says.

Growing up in Mobile, Alabama and New York, Jemisin was an avid reader, making up her own stories from the age of eight, but the lack of black women writing science fiction and fantasy, the genre she loved, made her believe it wasn’t for her. “We were all exposed to nothing but white dude fiction, occasionally young white women fiction, and if that’s how you’ve grown up, then that is what is normal.”

We were all exposed to nothing but white dude fiction and if that’s how you’ve grown up, then that is what is normal

Occasionally black characters would make their way into those stories written by white men. Jemisin recalls Arthur C Clarke’s Childhood’s End, in which Jan Rodricks, a black man, is the last human on Earth. “There’s a paragraph when the black male character is introduced where Clarke pauses the story to basically explain to the audience that, you know, this character is black, but it doesn’t really matter anymore in the future. And so for all intents and purposes, he’s basically a white guy who just happens to have black skin. Not really the ideal way to handle it.” She discovered Octavia Butler in the 80s, and that “helped a great deal, but she was one person”.

Jemisin trained as a psychologist and worked in universities, in a branch of counselling psychology specific to late adolescents. She carried on writing but gave up on any idea of publishing – she’d been to graduate school, she had student loans, it didn’t make sense to change careers. Then she hit 30, and had a “mini midlife crisis”. She’d written a novel – an early take on what would become The Hundred Thousand Kingdoms – and sent it out to publishers, also taking science fiction and fantasy writing workshop Viable Paradise, where she gave short stories a try for the first time, and began selling her work. The novel didn’t get picked up, “probably because it wasn’t very good”. 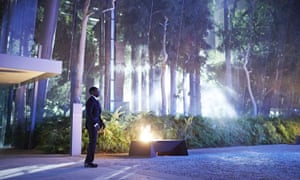 She wrote another, The Killing Moon, which got her an agent. Set in a world based on ancient Egypt, it had an almost exclusively black cast – and didn’t find her a publisher. “It was the mid 2000s, and at that time science fiction and fantasy publishers were not super interested in stories with black casts by black writers. They had done some stories with black casts by white writers, but they were not interested in those stories coming from people who actually were black.” Rejection letters would say things like, “we like this, but we’re not sure how to market it. We like this but we’re not sure who its audience would be”– the implication from publishers being “that fantasy readers don’t want to read about black people. Black people don’t want to read fantasy. So what do we do?” 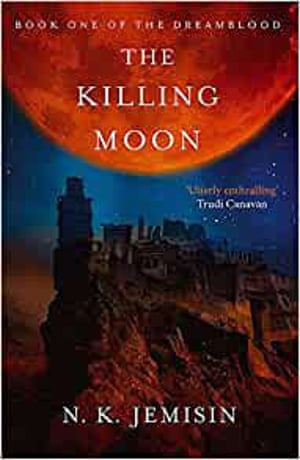 Jemisin decided to rewrite The Hundred Thousand Kingdoms, making nearly the entire cast white. “All of them were horrible people. They’d shank each other for, like, nothing. And I wrote this angry story about this lone brown girl going into this place full of mean white people,” she says. It went to auction, with three different publishers fighting over it. “And I’m like, this is what you want?” she says. “I was pretty bitter … I’d taken such care in [The Killing Moon] to include sympathetic white people, but that wasn’t what they wanted.”

Telling of Yeine Darr, an outcast from the barbarian north who is summoned to the city of Sky, where she is named one of the potential heirs to the king (whose family has enslaved the gods), The Hundred Thousand Kingdoms won Jemisin the Locus award for best first novel in 2011. Two more novels in the Inheritance trilogy followed in an astonishingly prolific 18 months. The books were selling steadily, if not meteorically, and her publishers were hungry for more: luckily, she had held on to The Killing Moon. Set in the ancient city-state of Gujaareh, where the Gatherers’ role is to harvest the magic of sleeping minds to use it for good, until the dreamers start dying, it was nominated for a Nebula award.

By now Jemisin was back in her day job as a counsellor. She had a dream, of “an angry woman coming towards me with a mountain floating behind her”. It gelled with ideas she’d had since going on a Nasa-sponsored workshop for writers about astronomy, and she began to write The Fifth Season. Taking place on a planet with “one vast, unbroken continent”, the earthquake-racked Stillness, the novel opens with the “end of the world” as one man – a despised and enslaved “orogene”, who can manipulate the earth – tears a great rift through the heart of the world. Jemisin has said in the past that “it’s pretty obvious that I’m drawing on the human history of structural oppression, as well as my feelings about this moment in American history”. It won Jemisin astonishing plaudits, as well as a deal for a television series. Accepting her third Hugo, she told her audience in a winner’s speech that went viral: “This has been a hard year, hasn’t it? A hard few years. A hard century. For some of us, things have always been hard.” 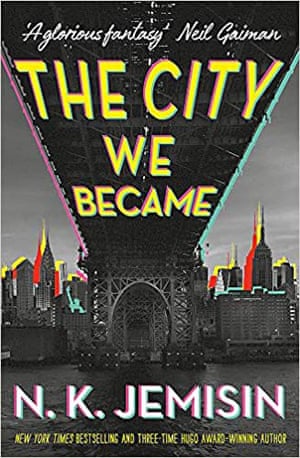 Writing the trilogy while working almost full time hadn’t been easy, particularly as Jemisin’s mother had fallen ill in 2015. In the middle of writing the third book, she decided to launch a Patreon, an online subscriber platform, to fund her work. She didn’t have high hopes, but “I got a lot more money than I was expecting, so I went ahead and quit the day job” .

That was 2016. After a number of years in which a group of writers – mostly male, white, and overwhelmingly rightwing – attempted to thwart the increasing diversity of the Hugos by block voting for their approved titles, Jemisin’s triple whammy felt like a turning of the tide. As she put it in her blistering winner’s speech: “This is the year in which I get to smile at all of those naysayers – every single mediocre insecure wannabe who fixes their mouth to suggest that I do not belong on this stage, that people like me cannot possibly have earned such an honour, that when they win it it’s meritocracy but when we win it it’s ‘identity politics’ –… I get to smile at those people, and lift a massive, shining, rocket-shaped middle finger in their direction.”

She’s gone on to raise that middle finger at them in her writing. The enemy in her new novel, The City We Became, is a huge, tentacled, Lovecraftian horror, an evil out to destroy cities. But this villain is no homage to the master of eldritch horror. In Jemisin’s story – “a glorious fantasy,” says Neil Gaiman – the greatest of cities become living entities. New York has just awoken, and a “beast from the deeps” is out to take it down. “When you experience walking through any city at the right time, when the light is right, and it feels like it’s you and the city communing. I wanted to put some words to that feeling, as artists do, and that’s what I came up with,” says Jemisin.

HP Lovecraft, she says, also wanted to put words to a feeling: the feeling he had, however, was a vicious xenophobia. “When you read things like The Horror at Red Hook he’s blatant both about the racism and the fact that the racism is the inspiration for his feeling that these people are evil.” Until 2015, a bust of Lovecraft was given to winners of the World Fantasy awards. This changed when Nnedi Okorafor – the first black person to win the prize since its inception in 1975 – took the award in 2011. “She received the award and was like, do you understand exactly what Lovecraft represents to someone like me?” says Jemisin. “There’s a sort of running thread in science fiction to ‘engage with the art and not the artist’, probably because so many science fiction writers are problematic people. But in Lovecraft’s case doing that is not just egregious but dishonest, because Lovecraft’s fiction is so rooted in his xenophobia.”

The evil in The City We Became is, Jemisin has said, “basically Cthulhu” (Lovecraft’s octopoid monster), with a group of diverse characters facing off against it – and against, pointedly, the man-bunned alt-right trolls it recruits to fight for it. “I was choosing to engage with Lovecraft’s fear of the city – his sense that these diverse people brought a bad energy to it,” she says. “My take was: of course they bring an energy to the city, all people do. He perceived it as evil, but really it’s just life.”

Does she feel that Lovecraft, and the tentacles of racism that have wound through science fiction and fantasy for decades, are vanquished these days? It’s around 15 years, after all, since The Killing Moon was rejected across the board. Perhaps a little, she says. Editors and publishers are now aware of the demand for inclusive, representative fiction, but – as a recent survey highlighted – US publishing is still blindingly white in terms of staffing. “And so there’s a strange and nasty tendency that’s developed for publishers to be perfectly OK with novels about certain groups of people written by white folks, but not written by members of that group,” she says. “It’s still easier for a white person to write a book with an all-black cast set in fantasy Africa and get it published than for a black person.”

Still, with her clutch of Hugos, Jemisin is having the last laugh. Looking back on that record-breaking night in 2018 she says, “There are detractors in the science fiction community who feel that was an inappropriate speech to make. They are welcome to that opinion,” she tells me, with extreme dryness. “I felt like I needed a little catharsis.”

• The City We Became by NK Jemisin is published by Orbit (£16.99). To order a copy go to guardianbookshop.com. Free UK p&p on all online orders over £15.