Migrant workers on Spanish farms that provide fruit and vegetables for UK supermarkets are trapped in dire conditions under lockdown, living in cardboard and plastic shelters without food or running water.

Thousands of workers, many of them undocumented, live in settlements between huge greenhouses on farms in the southern Spanish provinces of Huelva and Almeria, key regions for European supply chains.

Related: Rape and abuse: the price of a job in Spain’s strawberry industry?

Related: Rape and abuse: the price of a job in Spain’s strawberry industry?

Migrant workers on Spanish farms that provide fruit and vegetables for UK supermarkets are trapped in dire conditions under lockdown, living in cardboard and plastic shelters without food or running water.

Thousands of workers, many of them undocumented, live in settlements between huge greenhouses on farms in the southern Spanish provinces of Huelva and Almeria, key regions for European supply chains.

Local union activists have been supporting the migrants, bringing them water, food and basic supplies since Spain declared a lockdown in mid March.

Clare Carlile from Ethical Consumer, a UK charity supporting the local activists, says the situation is the result of years of neglect of workers.

“They got visited by the Spanish army on the 18th of March and told to stay put, even though in some places running water is several kilometres away. Now, with Covid fears, a water truck comes twice a week. If you are at work and miss it you must walk several kilometres for water after a hard day.

“Failure of employers provide basic rights has for years created dire circumstances for the inhabitants of the settlements. Now, the pandemic has pushed the situation to crisis point.”

The workers fear they are unprotected against the virus, both in the unhygienic settlements and when working side-by-side on the farms. 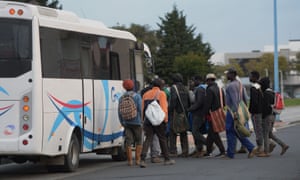 Migrant day labourers wait for employers to pick them up to collect fruit near Lepe, Huelva. Photograph: Cristina Quicler/AFP via Getty Images

Amadou, who is from Mali, is a member of the Collective of African Workers, a grassroots organisation campaigning for an end to the shanty towns in Lepe settlement, Huelva province.

We’re living here, feeling scared and afraid, because up until now we haven’t received any kind of help, not in terms of water, gloves, or face masks,” Amadou told Ethical Consumer.

Soc-sat, the local agricultural union, is providing food, soap, medicine and nappies for babies in settlements in Almeria and Huelva, while groups say promises have been made by the local state but have not yet materialised.

The Guardian has repeatedly reported on dire and sometimes exploitative conditions in the fruit and vegetable picking regions of southern Spain that supply berries and salad to supermarkets across Europe.

Spain is the main fruit and vegetables producer in the EU. Around half of the goods – from salad picked in greenhouses to citrus fruits – are for the export market. Nearly all, 93%, goes to the EU market: Germany France, the UK.

The regions of Huelva and Almeria, where migrants are now struggling under lockdown, are key parts of this cross-Europe supply chain. Huelva is where 97% of the Spanish berry crop is grown; in Almeria, workers producer around 35% of Spain’s total fruit and vegetable exports.

Last month Philip Alston, the UN Rapporteur on extreme poverty and human rights, visited Spain; his report was highly critical of the conditions for migrant workers in Huelva.

“I visited areas I suspect many Spaniards would not recognise as a part of their country,” Alston said. “In Huelva, I met with workers living in a migrant settlement in conditions that rival the worst I have seen anywhere in the world. They are kilometres away from water, and live without electricity or adequate sanitation. Many have lived there for years and can afford to pay rent, but said no one will accept them as tenants. They are earning as little as €30 (£26) per day … In 2018-19 the strawberry crop in Huelva was worth €533 million euros.

Recent weeks have seen concerns across Europe that supply chains will falter under the pressure of increased consumer demand and more difficult working conditions.

The estimated third of the workforce of migrant farm labour who do not have the legal right to work have faced many difficulties under lockdown.

Last week a coalition of 27 NGOS called for regularisation of migrant farm workers as well as proper protection from Covid-19. 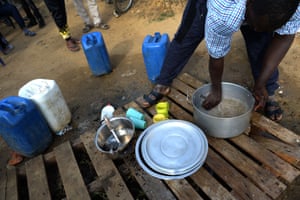 The migrant settlements do not have running water, electricity or adequate sanitation. Photograph: Cristina Quicler/AFP via Getty Images

One of the charities, Caritas, said: “The Covid-19 crisis and lockdown measures are … putting the spotlight on how acutely the EU’s agricultural system depends on migrant workers. Now that many of them have returned to their home countries, or cannot access the fields due to travel restrictions, vast amounts of fruits and vegetables are at risk of being left unpicked.

“In the fields and in many food-processing plants, labourers toil close to one another with no protective equipment. We call on states to ensure that migrant workers ... are provided with decent working conditions and granted immediate legal papers to remain.”

Spain will lift the lockdown in the coming weeks but activists say the situation is still dangerous for vulnerable workers, with lack of water and workplace protection putting workers at ongoing risk of further Covid-19 outbreaks.