New South Wales Covid-19 infections remain above 1,000 a day, with the total cases from the 2021 Delta outbreak now surpassing 50,000 cases.

But the trend line of new infections across the state continues to fall, and the vaccination rate among children has increased dramatically.

New South Wales Covid-19 infections remain above 1,000 a day, with the total cases from the 2021 Delta outbreak now surpassing 50,000 cases.

But the trend line of new infections across the state continues to fall, and the vaccination rate among children has increased dramatically.

Children in NSW between 12 and 15 have only been able to access vaccinations since 13 September. In 10 days, 28% of those children across the state have received their first dose.

Much of NSW remains locked down and police are cracking down on compliance measures as authorities battle to contain the spread of the virulent Delta strain.

The death toll from the current outbreak – which began in Sydney’s eastern suburbs on 16 June – now stands at 266, while the total number of infections for the outbreak has reached 50,123.

There are currently 1,244 Covid patients in NSW hospitals: 233 of those are in intensive care and 112 require a ventilator to breathe.

The seven-day rolling average of infections in NSW continues to fall, down to 1,108 from a peak of more than 1,400 less than a fortnight ago.

Meanwhile, nearly 30 people at Liverpool hospital in south-west Sydney hospital have contracted Covid in a week – the second major outbreak at the hospital in recent months.

The previous outbreak at Liverpool hospital seeded when a nurse unknowingly worked while infectious in late July, leaving 12 people dead. 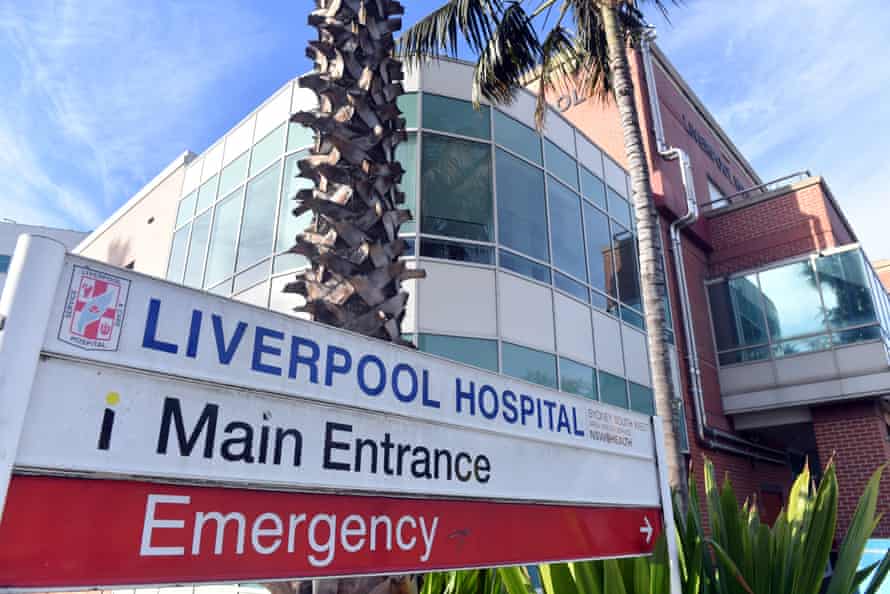 Liverpool hospital in south-western Sydney, where there have been two major outbreaks of coronavirus since the start of the Delta wave in June. Photograph: Mick Tsikas/AAP

An outbreak within the Mater hospital on Sydney’s north shore has grown to 14 cases, forcing all elective surgeries to be postponed for at least a week. The private hospital has been supporting the state’s public health system during the pandemic: eight staff members, five patients and one carer have tested positive in the outbreak, which was first detected over the weekend.

While NSW remains the most infected state in the country, Hazzard said case numbers in south and south-west Sydney – which had emerged as the epicentres of the current outbreak’s spread – have dropped significantly, assisted by high rates of vaccination.

“To the people of south-west Sydney and western Sydney who are doing a great job getting vaccinated and complying with the stay-at-home rules and you are making a difference to us all. Thank you so much.”

Hazzard said the pandemic had been a “gruelling 20 months”, but insisted the vaccination drive was working to protect NSW residents as the state approached the 70% and 80% double-dose thresholds.

While not committing to a date, he said “approaching Christmas,” he hoped people would be “effectively cut loose” from the current restrictions and would “have a much better life in the next few weeks”.

Government modelling suggests daily Covid-19 infections from this outbreak are likely to have already peaked in NSW – reaching 1,599 on 10 September – but hospitalisations are still expected to rise until October when the state’s already-stretched health network is likely to face unprecedented stress.

NSW Health has launched a recruitment campaign to boost its pandemic response workforce, aiming to attract health professionals who may have retired, are not currently working or are working in another industry.

Lismore and Albury were released from stay-at-home orders at midnight after no new cases were reported in the regions since they were locked down on 16 September.

Several local council areas in the state’s west were freed overnight too, with Gilgandra and Brewarrina now at least 14 days virus-free.

Restrictions will also ease in Narromine from Saturday provided the town has no cases or sewage detections before then.