Sydney’s lockdown is set to end for fully vaccinated residents on 11 October, the premier says, when 70% of the adult New South Wales population is expected to have received two doses of a Covid vaccine.

Gathering limits and indoor mask rules are to be abandoned from December, with unvaccinated residents forced to wait until then to reintegrate with society, under the latest reopening plan for NSW announced on Monday.

Sydney’s lockdown is set to end for fully vaccinated residents on 11 October, the premier says, when 70% of the adult New South Wales population is expected to have received two doses of a Covid vaccine.

Gathering limits and indoor mask rules are to be abandoned from December, with unvaccinated residents forced to wait until then to reintegrate with society, under the latest reopening plan for NSW announced on Monday.

As the state reported 787 new local Covid cases – its lowest daily figure in weeks – and 12 new deaths from the virus, the premier, Gladys Berejiklian, unveiled the freedoms that vaccinated residents would receive once the state achieved an 80% vaccination rate.

The plan also outlined further relaxation of the rules for unvaccinated people from 1 December. The three-stage blueprint builds on the relaxed rules for 70% coverage, which is expected to be reached earlier than expected.

Berejiklian said she could “quite confidently envisage 11 October will be the day” that freedoms for 70% vaccination coverage were introduced, that date being the Monday after the target was likely reached. However, she avoided calling it “freedom day”.

Regional travel has been pushed back to the second stage of reopening, at 80% vaccine coverage, which is expected to be achieved by 25 October.

The third stage of reopening is set for 1 December and, while it is not pinned to a vaccination target, the NSW chief health officer, Dr Kerry Chant, said she expected to reach 92% immunisation coverage of the adult population by that point.

As part of the second-stage reopening, gatherings in homes will increase from five people to 10 people, however, the 20-person outdoor gathering limit will remain. 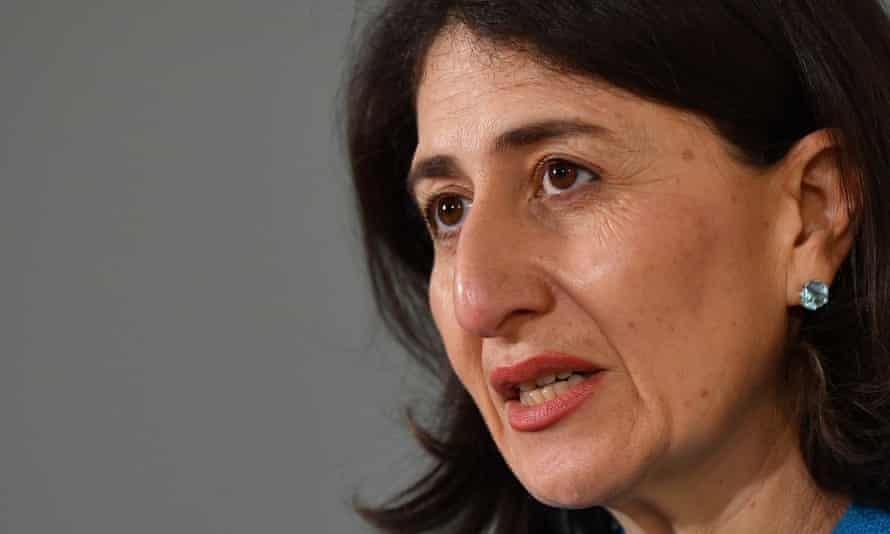 Unvaccinated people will be barred from all of the new freedoms, except for gatherings in places of worship, which will be able to open to all worshippers, regardless of immunisation status.

The third stage of reopening, to take effect from 1 December, does away with limits on in-home gatherings, and shifts to a density rule of one person per two square metres for outdoor and indoor settings, including hospitality, retail, entertainment and weddings. Masks will only be mandatory on public transport and planes, and for some hospitality workers. You can read more about all of the future freedoms here.

The reopening plan applies to the whole of the state, and deputy premier John Barilaro confirmed that unvaccinated residents of regional NSW who were currently not in lockdown would lose some freedoms if they were not fully vaccinated by 11 October.

“Today is an extremely disappointing day for the unvaccinated,” Berejiklian said, warning that they would have to wait at least four to five weeks from the 80% freedoms, until December.

It remains unclear how the new freedoms will be enforced and what the state’s testing, tracing, isolation and quarantine rules will look like at each stage.

On international travel and quarantine, Berejiklian said the state’s international quarantine intake would be restored to pre-Delta levels once 80% vaccine coverage was achieved. She said a cap on unvaccinated travellers may remain, but that “there is no reason” to have a cap on fully vaccinated Australians returning home, in light of the state’s home quarantine trial.

However, she reiterated that international travel rules were ultimately a federal government issue.

Berejiklian also refused to rule out future lockdowns after the final stage of reopening, but said localised orders not to leave an area were more likely. “We don’t envisage we will ever have a situation like the one experienced ever again … the chance of having any of those strict measures are very, very unlikely but I will never say no; we know you never know what’s around the corner [in] a pandemic.”

Berejiklian also said she would receive health advice later on Monday as to whether the regional town of Port Macquarie would re-enter lockdown due to virus spread.

There were 1,155 Covid-19 patients in hospitals in NSW, with 214 in intensive care units and 115 on ventilators. Thousands more were receiving hospital-grade care in their homes, to avoid further Covid exposure.

Of the 12 new deaths announced on Monday, six people were not vaccinated, while five had received one dose and one person had received two doses.