Sean Ingle was at the men’s triathlon earlier to see GB’s Alex Yee fall just short of victory against Norway’s Kristian Blummenfelt. His report is here:

Thanks Tom - and hello everybody.

For the next little while our attention is going to be trained on the Tokyo Aquatics Centre where four more gold medals will be handed out. Here’s what’s in store:

I shall not be blind to other non-medal events (in particular women’s street skateboarding, rugby 7s, and surfing) but attention will be trained primarily on the pool. Feel free to drop me an email or a tweet (see details at the top of the page) if you think something particularly noteworthy requires a shout out. 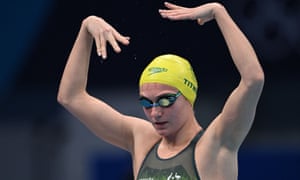 I’m handing over to Jonathan Howcroft now, he’ll take you through the next few hours with his usual flair and verve. And maybe some zing. Who knows?

Australia’s Steph Gilmore has spoken after her shock defeat in the women’s surfing. The former world champion and world No 5 was expected to challenge for a medal this year.

“There’s so much build-up to this, it being such a historical event for surfing - just to even qualify for the Olympics was such a battle,” she said. “This is the world’s biggest sporting stage. You want to show up and do your very best.

“I’m super disappointed that I couldn’t make it happen, but there’s always [the next Olympics]. I’m only 33 and there’s plenty of amazing female athletes who get up into their 40s. Look at Serena Williams, she’s still doing so well. So there’s plenty of time. 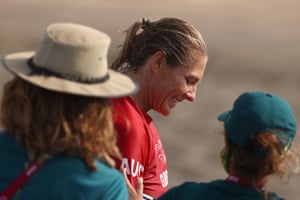 Stephanie Gilmore of Team Australia reacts after losing her Women’s Round 3 heat, eliminating her from the competition, on day three of the Tokyo 2020 Olympic Games at Tsurigasaki Surfing Beach on July 26, 2021 in Ichinomiya, Chiba, Japan. Photograph: Ryan Pierse/Getty Images

After a tricky start against a scrappy Canada team, GB have beaten Canada 24-0 in the teams’ men’s sevens opener. Dan Norton, as usual, was superb.

Australia’s Hayley Wilson is in eighth place in the women’s skateboarding but she’ll need a couple more good runs to make sure she makes the final with a few more heats to come. The top eight from the heats make the final, so she’s right on the edge at the moment with plenty of good skaters to come.

You can see the latest scores here: 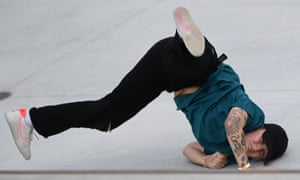 GB and Canada have started their men’s rugby sevens match. GB, you may remember, won silver at the last Olympics. They start their game by taking the knee. It’s a scrappy start for GB before Dan Norton scores a try just before the break to give his team a 7-0 lead. Norton is the all-time leading try scorer in sevens history, so he’s good at this type of thing.

Two days of Olympic sport in Tokyo have created a moral dilemma for millions of people in the host country who had hoped the day would never come when Japan’s athletes would win their first gold medals of the summer.

Having invested so much in opposing the Games, would it then be possible, in good conscience, to take pleasure in the feats of the athletes once they became an inevitability?

The answer in Japan, after a weekend in which it brought its gold medal tally to five, is a qualified yes.

Newspapers more accustomed to framing Tokyo 2020 against the gloomy backdrop of the coronavirus pandemic are running headlines that are an unashamed celebration of sporting achievement.

On Saturday, news bulletins led with breathless accounts of Japan’s first gold medal in the Games, which went to the judoka Naohisa Takato in the men’s 60kg.

TV reporters interviewed Takato’s delighted parents, watching with friends and supporters in his hometown, while the victor received a congratulatory call from the prime minister, Yoshihide Suga, who must have delighted in relinquishing his role – however briefly – as the bearer of bad tidings.

You can read Justin’s full article below:

A few more results from the women’s surfing. Costa Rica’s Brisa Hennessy beat NZ’s Ella Williams while USA’s Caroline Marks was too good for Japan’s Mahina Maeda. Hennessy and Marks are both through to the quarter-finals. 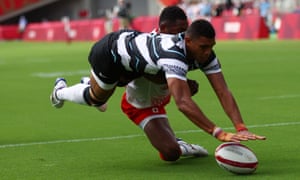 Fiji edged past Japan in the sevens. Photograph: Siphiwe Sibeko/Reuters

And the Olympic champions Fiji come back to win in their men’s sevens match against Japan. They were in trouble, trailing 19-12 with four minutes to go ... and Japan squandered a late chance to score from a lineout. It ended 24-19 to Fiji.

The men’s rugby sevens has started. And the hosts are pushing the reigning/only Olympic champions Fiji: it’s 19-19 with three minutes to go. 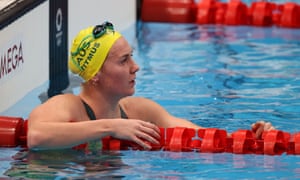 Ariarne Titmus is one of the names to watch in the pool. Photograph: Al Bello/Getty Images

I’m at the Tokyo Aquatics Centre for what is arguably the biggest clash of the Olympic swim meet: American Katie Ledecky against Australia’s Ariarne Titmus in the women’s 400m freestyle.

Ledecky has long reigned supreme in the pool; she won an Olympic gold as a 15-year-old and then backed up in Rio to take four and a silver. But Ledecky’s title as queen of the pool is under threat from young Aussie Titmus - nicknamed the Terminator (because her first-name is shortened to “Arnie”). Titmus took down Ledecky in the 2019 world championships - the last time the duo have faced off.

The swimming world has been waiting for this Olympic match-up ever since. It is going to be fast and furious - tune in from 11.20am Tokyo time (although there’s also some cracking action beforehand).

GB’s Alex Yee has been speaking to the BBC after his silver medal in the men’s triathlon. He says his opponent was simply better on the day.

“It’s been a tough preparation phase for this Games. In training I went much harder than this race but unfortunately he was better on the day,” says Yee. “I am just over the moon. I was already deep in the well and dug that little bit in my soul. It wasn’t enough to catch Kristian Blummenfelt but it was enough to get silver.” 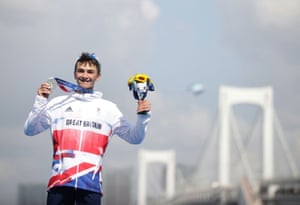 Sean Ingle was at the men’s triathlon earlier to see GB’s Alex Yee fall just short of victory against Norway’s Kristian Blummenfelt. His report is here: 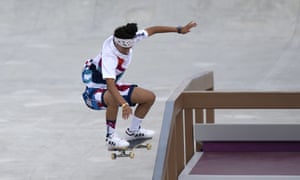 The ever excellent Barney Ronay was on hand to watch the taekwondo yesterday and writes that it perfectly illustrated the beauty and cruelty of the Olympics. Read more here:

More women’s surfing: Yolanda Hopkins of Portugal has beaten France’s Johanne Defay in round three and will advance to the quarter-finals.

An email from reader: “Is NBC’s coverage of the Olympics any good?” Ummmmm ... define “good”. If you define it as “lots of human interest stories shown during primetime at the cost of actual live sport” then, yes, NBC’s coverage is good. But if you just want to see who won and what times they got AS THE EVENTS ACTUALLY HAPPEN, then: no.

The surfing competition at Tsurigasaki beach has produced a major shock after Australia’s Steph Gilmore, the seven-time world champion and current world No 5, was bundled out on Monday morning. Gilmore had looked in good nick when competition got under way on Sunday, but her medal hopes fell apart 24 hours later in her third round heat against South Africa’s Bianca Buitendag. Buitendag had single wave scores of 6.83 and 7.10 to move ahead of Gilmore, who could not respond in the 14 minutes remaining in the heat.

Gilmore’s exit leaves Australian hopes in the women’s competition with Sally Fitzgibbons, who faces Pauline Ado of France later on. 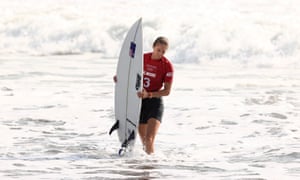 Steph Gilmore takes in her defeat in the surfing. Photograph: Ryan Pierse/Getty Images

The 27-year-old from Norway has done it! He outran Yee, who is a brilliant runner. GB’s Yee finishes second and New Zealand’s Wilde gets bronze. Blummenfelt wins by around 11 seconds. He kicked away from the pack in the final stages and Yee couldn’t respond. Blummenfelt is a notoriously fierce trainer - in a sports famed for its athletes’ dedication - and puts in up to eight hours a day. That training paid off today.

Blummenfelt has made a move! He’s surged ahead of Yee and Wilde! The 27-year-old is around five seconds ahead of the Briton and Yee can’t respond!

We’re on the last lap of the triathlon - around 1.5 miles to go. GB’s Alex Yee leads Norway’s Kristian Blummenfelt and New Zealand’s Hayden Wilde. Yee, remember, is a superb runner (well, they’re all superb runners, but he is superb among superb runners) and is comfortable favourite to win GB’s first gold of this year’s Games.

The men’s triathlon is in full swing and we’re on the final leg – and the athletes are on the run. Ominously for his competitors, Great Britain’s Alex Yee is at the front of a pack of nine leading the race – he is an incredibly good runner and it will be tough for anyone to beat him on foot. Because of the heat in Tokyo the athletes are allowed to hydrate as much as they want and they’re all taking advantage.

Hello and welcome to another day of action in Tokyo. We’re all go in the men’s triathlon while round three of the women’s surfing and the debut of women’s skateboarding (there was a home win for Japan yesterday in the men’s competition) will start shortly.

Meanwhile, here is my colleague Martin Belam on what to look forward to today. All events are listed here in local Tokyo time. Add an hour for Sydney, subtract eight hours for York, 13 hours for New York and 17 hours for San Francisco.