Giacomo Dalla Torre, the head of the Catholic chivalric group, helped smooth ties with the Vatican. 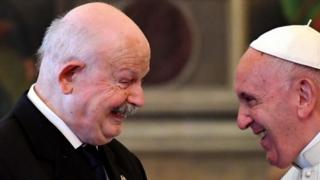 Giacomo Dalla Torre, Grand Master of the Order of Malta - the Catholic chivalric group - has died at 75.

The order was founded nearly 1,000 years ago to help pilgrims in the Holy Land and is now a worldwide charity.

Dalla Torre was credited with smoothing ties with the Vatican after a fractious dispute over the running of the group.

It is also known commonly as the Knights of Malta, although its full title is the Sovereign Military Hospitaller Order of St John of Jerusalem, of Rhodes and of Malta.

Dalla Torre became the interim grand master of the group in 2017 after Briton Matthew Festing resigned from the post, which is usually held for life.

Pope Francis had asked Mr Festing to step down amid a public dispute over a condom distribution programme run by the Knights in Myanmar.

During his leadership he ushered in a period of change within the group, easing out its traditionalists and aligning with the more reformist Pope Francis.

The group has been working on a new constitution to make it more transparent and to alter the monarchical hierarchy that prevents commoners from taking top posts.

It normally expects to elect a new leader within three months but the coronavirus emergency may extend this.

What is the Order of Malta?

It traces its history to the 11th Century, with the establishment of an infirmary in Jerusalem that cared for pilgrims of all faiths.

The lay religious order of the Roman Catholic Church has 13,500 members and 120,000 staff and volunteers, who provide healthcare in hospitals and clinics around the world.

It enjoys many of the privileges of a nation state. It issues its own stamps, passports and licence plates - and holds diplomatic relations with more than 100 states, the Holy See included.

The BBC's David Willey gave his impressions of the Knights' headquarters during the order's 900th anniversary.