There’s been a lot of talk about pizza in Amsterdam lately. With the arrival of nNea and Beppe – both sporting Neapolitan credentials – it seems the city is taking its pizza more seriously than most outside of Italy. And yet the

There’s been a lot of talk about pizza in Amsterdam lately. With the arrival of nNea and Beppe – both sporting Neapolitan credentials – it seems the city is taking its pizza more seriously than most outside of Italy. And yet there are a lot of pizzerias that have been around for years that I’ve still not tried. So in the past week, I set about changing that.

Before the fateful Ajax vs. Tottenham football match, I carb-and-wine-loaded at La Zoccola del Pacioccone. This is a pizzeria I’ve had recommended to me on a few occasions, but it’s sat on my To-Eat List, ignored, for months if not years. I’m not sure why, because the toppings were a delight to eat: the burrata was pleasantly buffalo-tasting, and the prosciutto was rich and generously sliced. Meanwhile, the ‘nduja on our second pizza was properly spicy, and the mozzarella was smoked – adding an excellent depth of flavour. 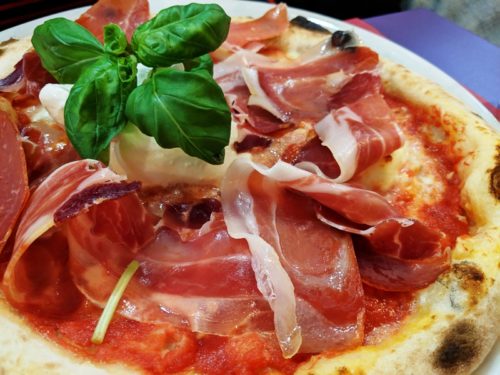 My only criticism (and I guess this is kind of crucial) was the crust: while there was nothing wrong with the dough itself, I suspect that the oven was not hot enough, or that there were too many pizzas cooking in there at once. Our pizzas lacked a firm, crispy base, and instead were slightly flabby and rubbery in texture. With that being said, I’d still go back to La Zoccola for the toppings alone…

Mr Foodie had been angling to go to Porchetteria in de Pijp for some weeks, so on Friday we popped in straight from after-work drinks in search of… porchetta. Naturally. But we were soon to discover that while Porchetteria does serve a couple of porchetta dishes, it is essentially a pizza parlour. And while this was clear when we later looked at the website, the name felt misleading.

False advertising aside, we enjoyed the food we ate there a lot. When we arrived, we were the only customers so the man serving us (who I assume was the owner) took the time for a friendly chat and offered us an off-menu starting point for our meal: a tagliere (the Italian word for chopping board) of salami, prosciutto, a spicy sausage from Bologna and some mouth-watering burrata – all served with crispy slices of focaccia drizzled with olive oil. 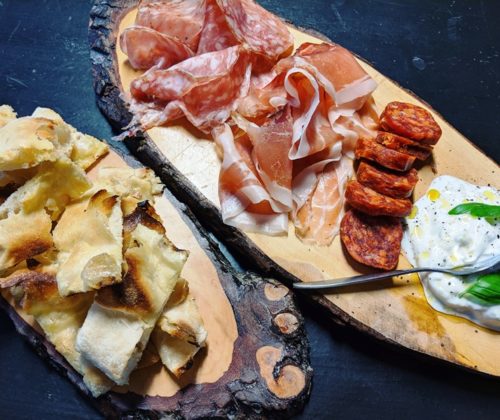 The tagliere being no small portion to start with, we decided to share a porchetta dish next. Described as a Roman-style pizza bianca ripiena (filled white pizza), the porchetta came in a sort of focaccia sandwich stuffed with burrata and lettuce as well as the pork itself. While it tasted delicious, it was hard to discern the porchetta through the creaminess of the cheese. This was perhaps also down to the fact that there were no noticeable fennel seeds or herbs running through the meat as you’d expect from porchetta – it tasted essentially like simple roast pork. Perfectly pleasant but not what we were expecting. 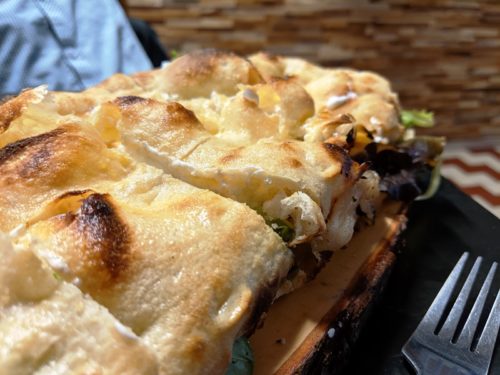 The pizzas at both restaurants were comparable in price: €15 at Porchetteria and about €17 at La Zoccola, while a glass of simple house red wine was around the €5 mark. I enjoyed them both in different ways, but I also felt that both could’ve been improved upon with fairly obvious tweaks. More pizza research needed? It’s a tough job but someone’s gotta do it…