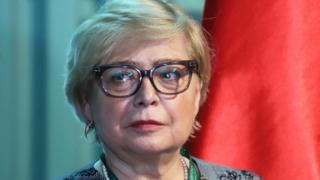 The outgoing head of Poland's Supreme Court says the nationalist ruling Law and Justice Party (PiS) is moving the country towards an authoritarian state.

Prof Malgorzata Gersdorf, retiring after a six-year term, was speaking to broadcaster TVN24.

Asked if Poland was an authoritarian state, she said "not yet I hope, but we're moving towards one fast".

She cited the party's determination to hold a presidential election next month by postal vote only.

The controversial election, which is happening despite the coronavirus lockdown, sidelines the state electoral commission.

Mrs Gersdorf has defended the supreme court's independence and rebuffed accusations by the governing party and its ally President Andrzej Duda that Polish judges are a privileged and corrupt "caste" that protect their own interests, not the peoples'.

"I paid for defending judicial and judges' independence, becoming the target of both petty and brutal attacks. I wasn't prepared," Mrs Gersdorf wrote in a farewell letter to her colleagues.

With the country under lockdown, Mrs Gersdorf did not convene a general assembly of the court to nominate her successor.

President Duda on Thursday appointed Kamil Zaradkiewicz, a former Justice Ministry official during the previous PiS government, as her interim successor to organise that process.

Judge Zaradkiewicz was appointed to the Supreme Court in 2018 by President Duda.

"In my opinion, Professor Gersdorf gave up. I think she and the others are tired of having to deal with this constantly for four years," Patryk Wachowiec, legal analyst for the Civil Development Forum think tank told the BBC.

On Wednesday, the European Commission launched the latest in a string of legal challenges against the government's judicial reforms.

With Mrs Gersdorf's departure and the retirement of four other judges, critics of the reforms say the governing camp will move swiftly to politically capture the Supreme Court, just as they say it has already packed the Constitutional Tribunal and the body that appoints judges - the National Council of the Judiciary - with loyalists.

PiS justifies its wide-ranging changes by citing opinion polls that show Poles are frustrated with the judicial system's slowness and complexity, with trials regularly dragging on for months. However, there is no evidence the procedures are more efficient now after four years of reform.

The governing camp denies the reform has eroded judicial independence and the rule of law, arguing that the courts are more democratic because they are now better equipped to defend citizens' interests. The European Commission, the OSCE international security body, the Council of Europe, and legal associations from the US, the UK and across Europe disagree.

The European Commission says new legislation broadens the disciplinary measures that can be taken against judges and can be used as "a system of political control of the content of judicial decisions".

Mr Wachowiec is pessimistic about the future of the Supreme Court's independence partly because of the European Commission's lack of decisive action.

"Acting always too late and trying to engage in debate in the face of blatant violations of the rule of law, the 'new' Supreme Court will eventually share the fate of its counterpart, the Constitutional Tribunal - loyal to the government, hostile to the public and not impartial," he said.