Priti Patel is expected to be cleared this week of bullying senior civil servants in three separate government departments, Whitehall sources have confirmed.

Priti Patel is expected to be cleared this week of bullying senior civil servants in three separate government departments, Whitehall sources have confirmed.

She is still to face claims from her former Home Office permanent secretary, Sir Philip Rutnam, who is using whistleblowing laws to take her to an employment tribunal for constructive dismissal.

Reports of her impending clearance have prompted condemnation of the Cabinet Office inquiry process, which is conducted in secret and offers no recourse for complainants. Boris Johnson has already been criticised for compromising the process by insisting, before the inquiry had concluded, that he would continue to support Patel.

Dave Penman, the head of the FDA union, which represents senior civil servants, including Rutnam, said the cabinet inquiry process should be reviewed.

“It tells you everything that is wrong with investigations under the ministerial code that a process which is not written down, which contains no rights for those who might complain, that is determined in secret, alone by a prime minister who has already pledged his allegiance to the minister in advance, and which allows no right to transparency or challenge for anyone who complained, would then be leaked on the evening before the home secretary is due to appear before the home affairs select committee,” he said.

Informed sources said on Tuesday that Patel, the MP for Witham, is on the verge of being officially cleared. The Cabinet Office inquiry was conducted by Helen MacNamara, the propriety and ethics director general, and Sir Alex Allan, the independent adviser on ministers’ interests. 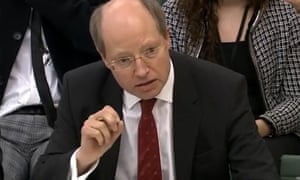 Sir Philip Rutman, the former permanent secretary at the Home Office, speaking before the home affairs committee in parliament in February. Photograph: AFP via Getty Images

Before its findings are announced, the inquiry would have to be signed off by, and Boris Johnson.

Patel has been accused of bullying at least three officials in the Home Office. According to reports, a senior Home Office official collapsed after a fractious meeting with her. Patel is understood to have successfully asked for another senior official in the department to be moved from their job.

Rutnam subsequently wrote to all senior civil servants in the department highlighting the dangers of workplace stress, and made clear they could not be expected to do unrealistic work outside office hours.

Rutnam resigned in February and accused Patel of orchestrating a “vicious” campaign against him, of lying about her involvement in it, and of creating a climate of fear in her department.

Officials in her private office at the Department for International Development had made a “tsunami” of complaints about her behaviour, it was alleged. She was accused of ridiculing and belittling staff and exerting “heavy pressure” in emails.

There were also allegations that one member of staff at the DWP had taken an overdose after clashing with her, a charge her allies dismissed.

After Labour called for a Cabinet Office inquiry into the claims, Johnson defended Patel in the Commons, saying he would “stick with Prit”.

Friends of Patel have consistently argued that she has behaved properly at all times, some saying she had been the victim of sexism and snobbery from senior staff.

She is due to appear before the home affairs select committee on Wednesday morning.