Fabulous in fuchsia! Queen Maxima of the Netherlands looks VERY vibrant in a pink top and floral skirt as she joins King Willem-Alexander for an official visit to Germany

By Latoya Gayle For Mailonline

The Queen of the Netherlands is known for her exceptional sense of style, and today she was representing her country in typically colourful fashion as she kicked off a three-day visit to Germany

Queen Maxima, 48, was joined by her husband King Willem-Alexander, 52, as they were received by Prime Minister Manuela Schwesig, and her husband Stefan Schwesig, at the State Chancellery of Mecklenburg-Western Pomerania.

Mother-of-three Maxima, stunned in a fuchsia blouse paired with an a-line floral skirt as the they posed for a photo during an introductory meeting.

She wrapped her hair neatly out of the way with a black hat to match her stiletto heels. 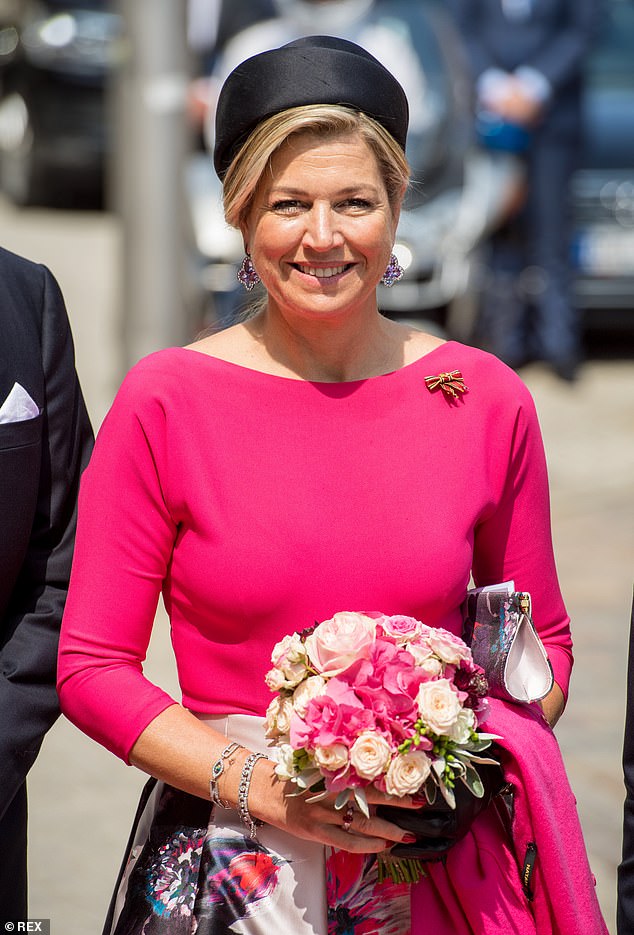 Queen Maxima (pictured), 48, of the Netherlands was pretty in pink as she stepped out in a fuchsia blouse teamed with a floral skirt on day one of her three-day visit to Germany 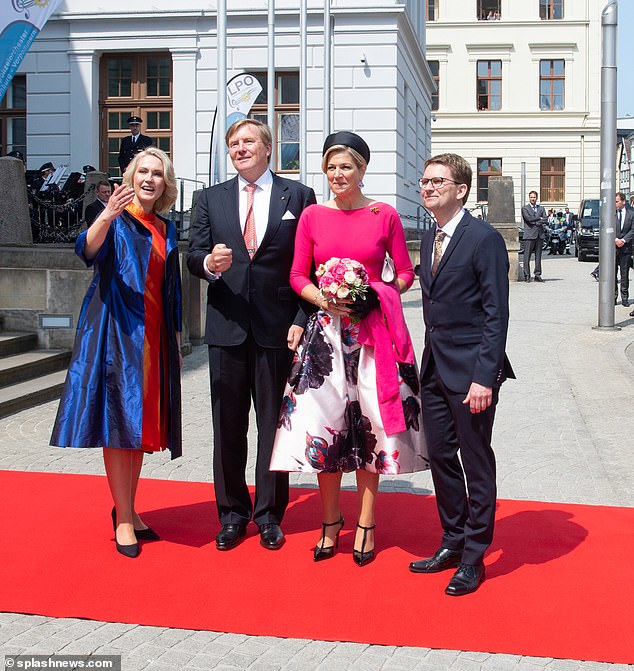 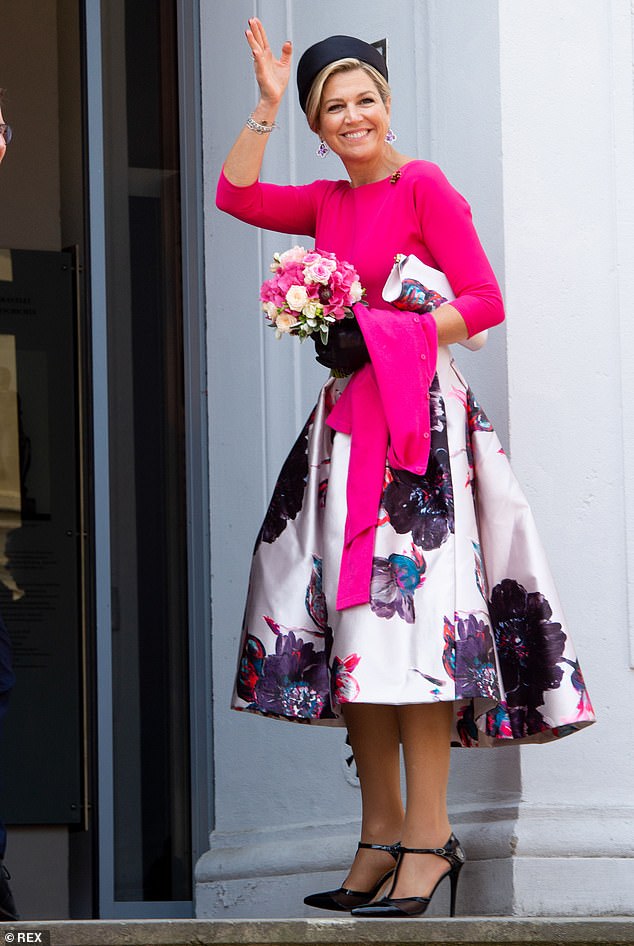 The Royal opted for her signature natural look, wearing minimal makeup with a slight smokey eye.

Queen Maxima has donned similar fuchsia outfits in the past, using accessories to refresh the timeless look.

The mother-of-three and King Willem-Alexander appeared in good spirits as they met with those who had lined the streets in anticipation of their arrival.

The Dutch couple were offered a lunch by the Prime Minister before King Willem-Alexander gave a speech at Schwerin Castle on the importance of working together and building on the Hanze period.

He said: 'Mecklenburg-Vorpommern and the Netherlands are not direct neighbors. But we are connected for many centuries. 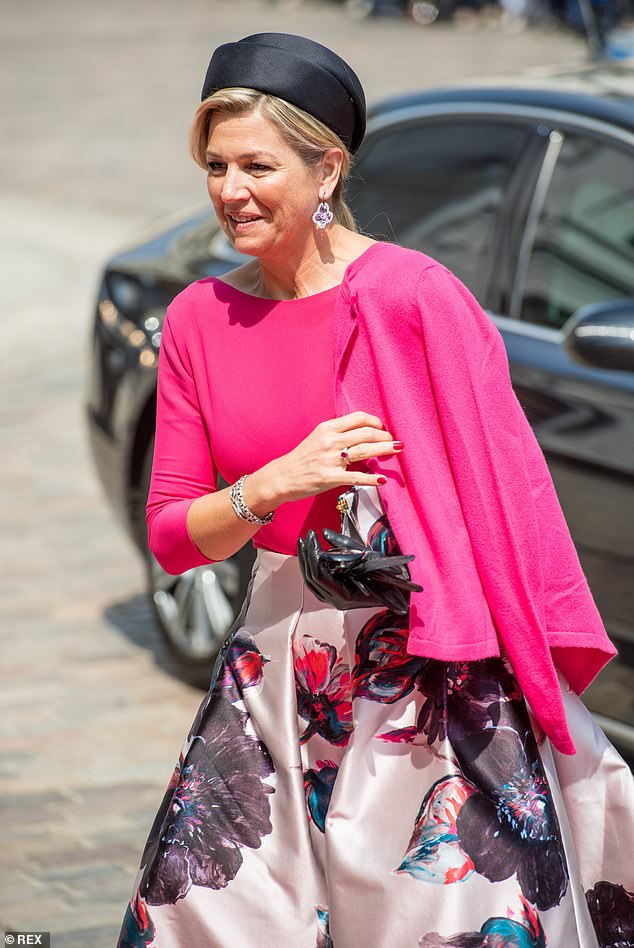 The Dutch Royal (pictured) swept her hair underneath a black hat, matching her stilettos for an effortlessly glamorous look 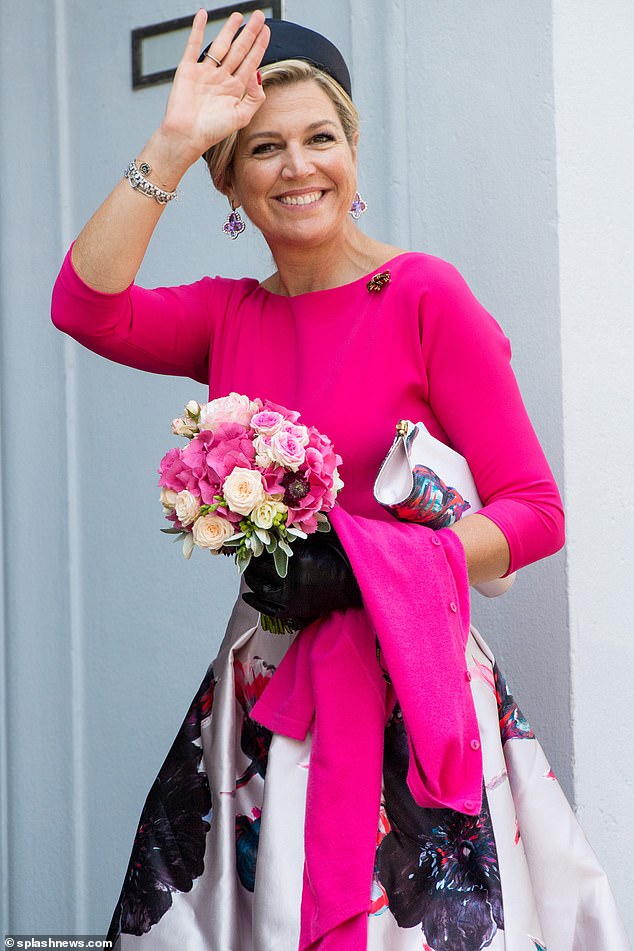 Maxima (pictured) appeared to be delighted as she waved to the crowds that had lined the streets in in Mecklenburg-Western Pomerania, Germany, in anticipation of the visit 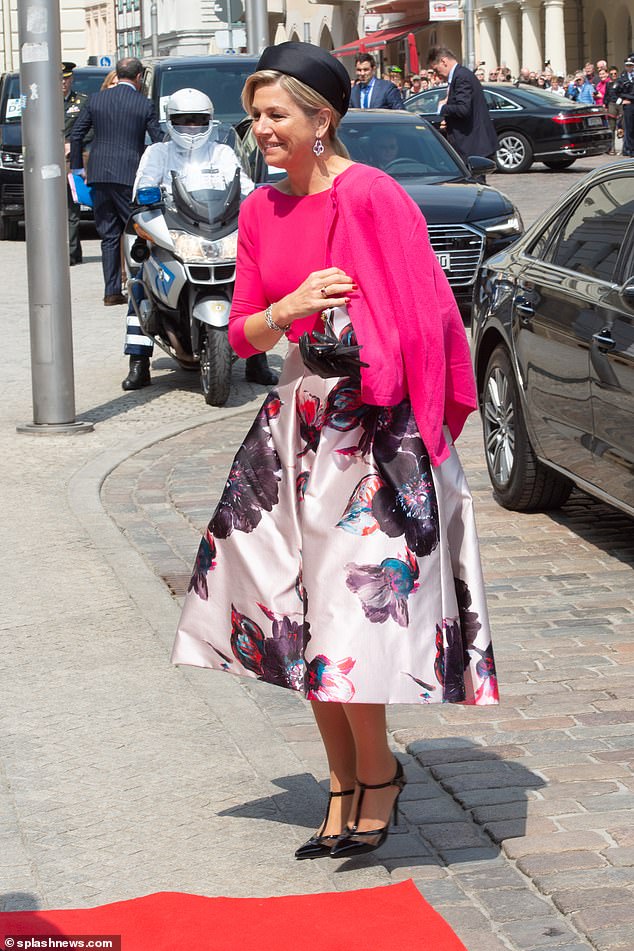 'What has grown during the Hanze time is still visible. We recognize something in each other: entrepreneurial spirit, the will to cooperate. That recognition makes our band so strong.

'....The history that we share since the Hanze period is alive. We are happy to add a new chapter with our visit, believing that many more beautiful things will follow.'

The Royals of the Netherlands are set to attend a trade dinner at the Kurhaus in Warnemünde later on today with attendees from the maritime trade mission and those specializing in coastal protection and agriculture. 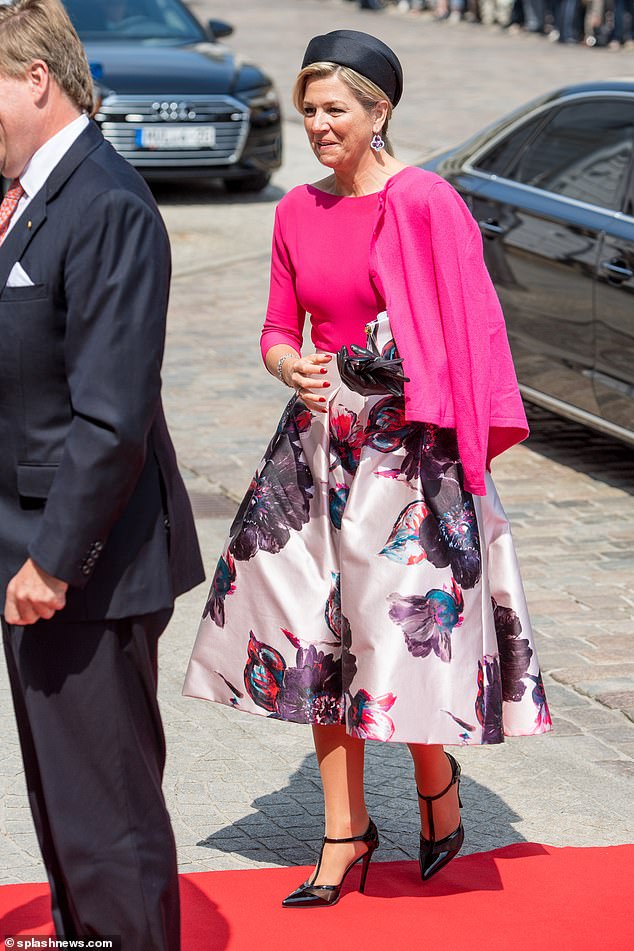 The Dutch Royals frequently visit Germany to pay special attention to economic relations between the countries, King Willem-Alexander (pictured left with Maxima) reinforced the importance of building together during his speech 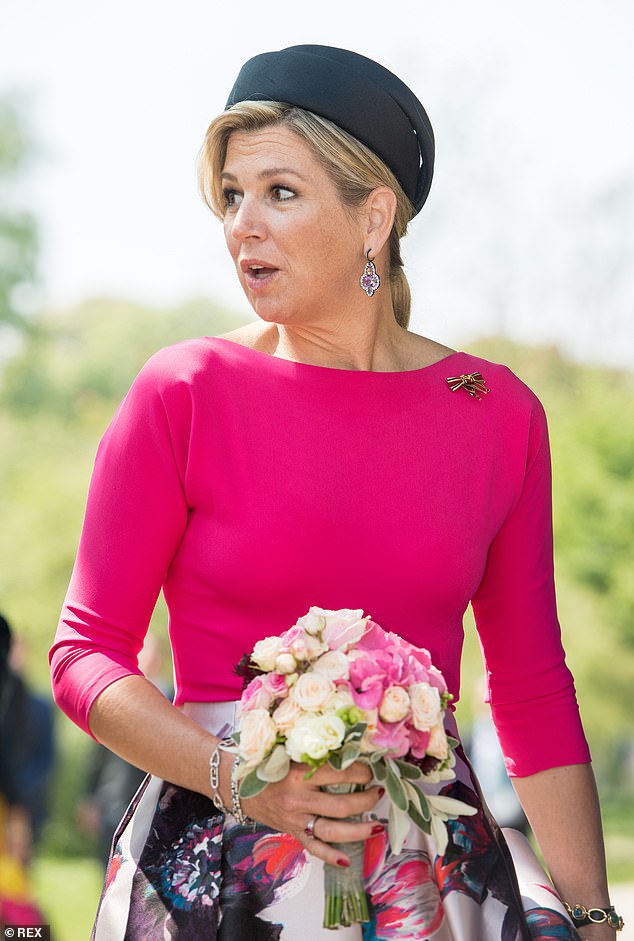 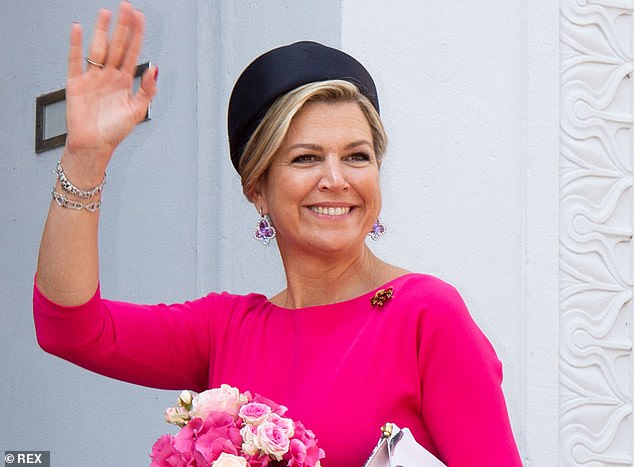 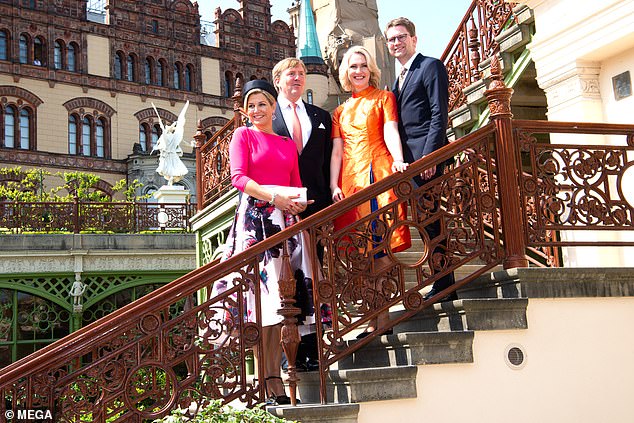 Queen Maxima and King Willem-Alexander (pictured with Manuela Schwesig, and her husband at Schwerin Castle) are set to visit MV Werften in Rostock tomorrow morning

Their busy visit also includes a visit to MV Werften in Rostock and a trip to arable farm in Nauen on Tuesday. The Royals trip to Germany will conclude with a lunch at Schloss Sanssouci in Potsdam on Wednesday.

The aim of their visit is to focus on the economic relations between the German and Dutch.

The Royal pair who often make one or more visits for the same purpose annually, coordinated in bronze for a visit to Bremen in Germany earlier this year. 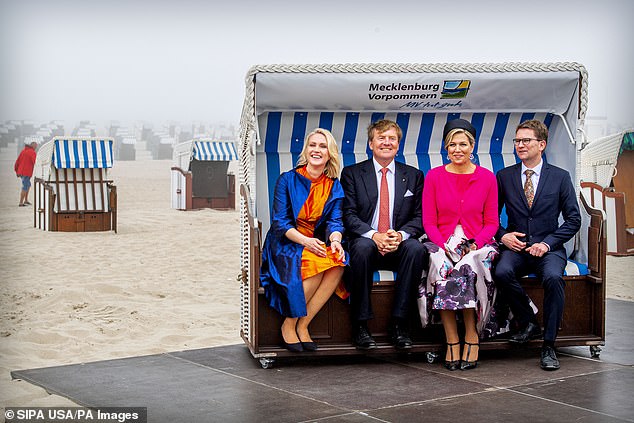 King Willem-Alexander and Queen Maxima, centre, posed for a photograph with Manuela Schwesig, left, and Stefan Schwesig, right, while at a beach today 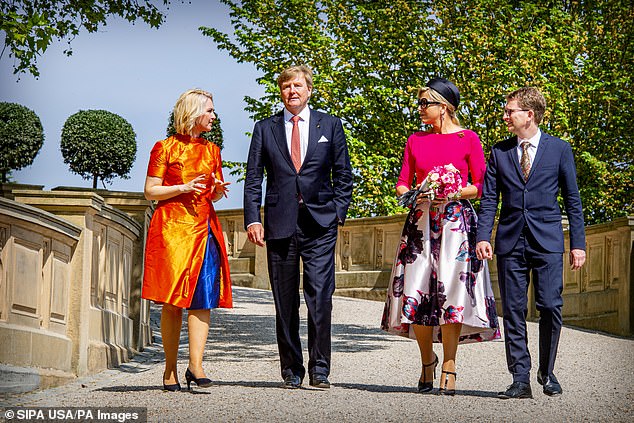 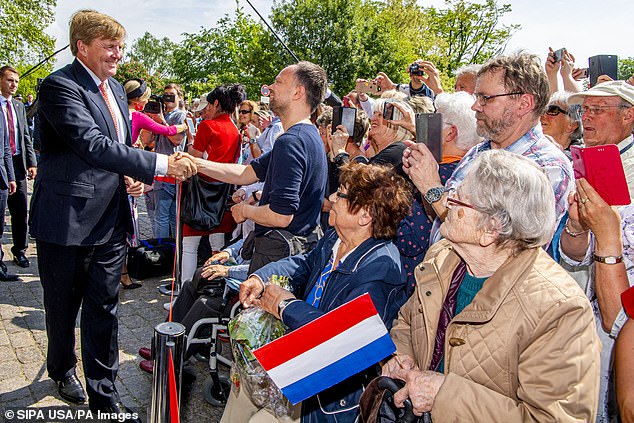 Dozens of people lined the streets today to welcome the King, pictured and Queen of the Netherlands during their visit to Mecklenburg-Vorpommern and Brandenburg 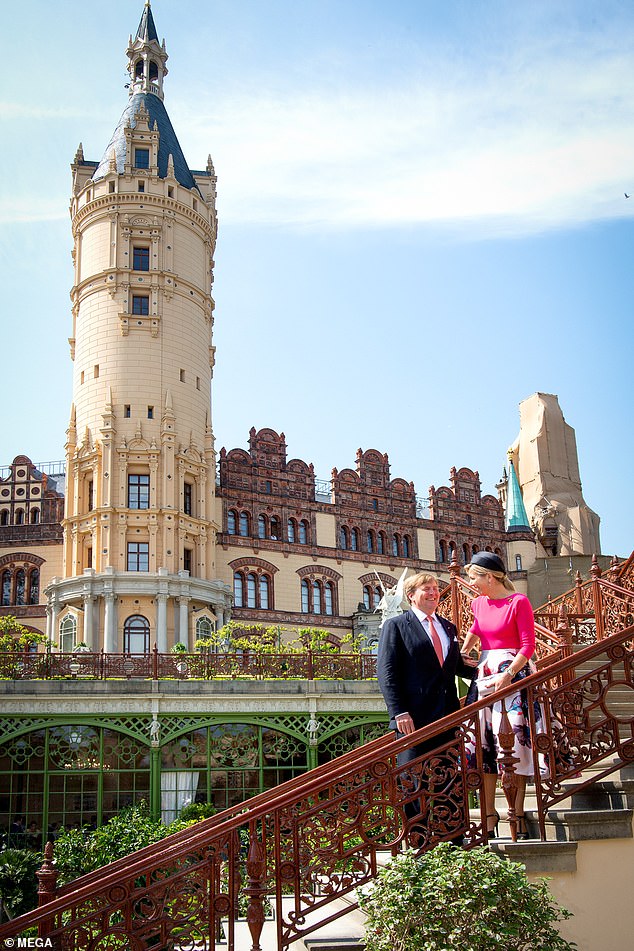 Queen Maxima and King Willem-Alexander will be greeted by Prime Minister Manuela Schwesig before being offered a lunch.

King Willem-Alexander gives a speech at the Orangery of Schwerin Castle.

The Dutch Royals attend a trade dinner at the Kurhaus in Warnemünde.

In the morning the couple will visit MV Werften in Rostock before visiting a field stone barn "Die Scheune" in the village of Bollewick.

They will then meet Prime Minister Dietmar Woidke of Brandenburg during a visit to an arable farm in Nauen.

In the afternoon Queen Maxima and King Willem-Alexander will visit Henning von Tresckow Barracks in Potsdam.

The Royals will then enjoy a dinner at Saftfabrik Werder in collaboration with the Literaturbüro Brandenburg.

Their day will begin by meeting Prime Minister Dietmar Woidke at the State Chancellery of Brandenburg.

Before their concluding lunch, Queen Maxima and King Willem-Alexander will attend engagements at the Wissenschaftspark Albert Einstein and at the Media Tech Hub Potsdam.