Queen Maxima of the Netherlands looks in good spirits during last day of visit to Germany Daily Mail Queen Maxima, 48, completed her three-day tour of Germany with a visit to the State Chancellery in

Blush beauty! Queen Maxima dons a pink dress with a matching statement hat for the final day of her visit to Germany

By Claire Toureille For Mailonline

Queen Maxima looked in great spirit on the last day of her visit to Germany.

The royal, 48, made her way to the State Chancellery in Potsdam on the last day of her three-day tour of the German states of Mecklenburg-Western Pomerania and Brandenburg.

Maxima, accompanied by her husband King Willem-Alexander, looked gorgeous in a blush pink dress with puffed sleeves. A daring large hat of the same colour completed the look.

Armed with a nude shawl to protect her from the chilly Potsdam breeze, she seemed in excellent spirits as she made her way to the State Chancellery, and did her best to tread carefully on the slippy pavement around the chancellery. 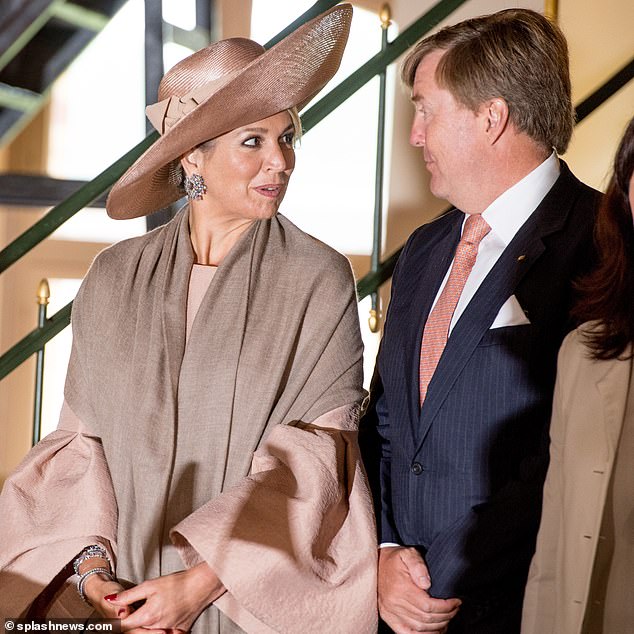 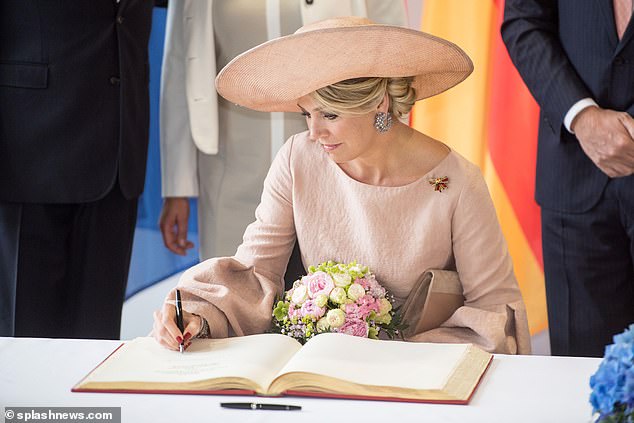 Pictured: Maxima, 48, signing her name into the Golden Book of the State Chancellery in presence of her husband King Willem-Alexander 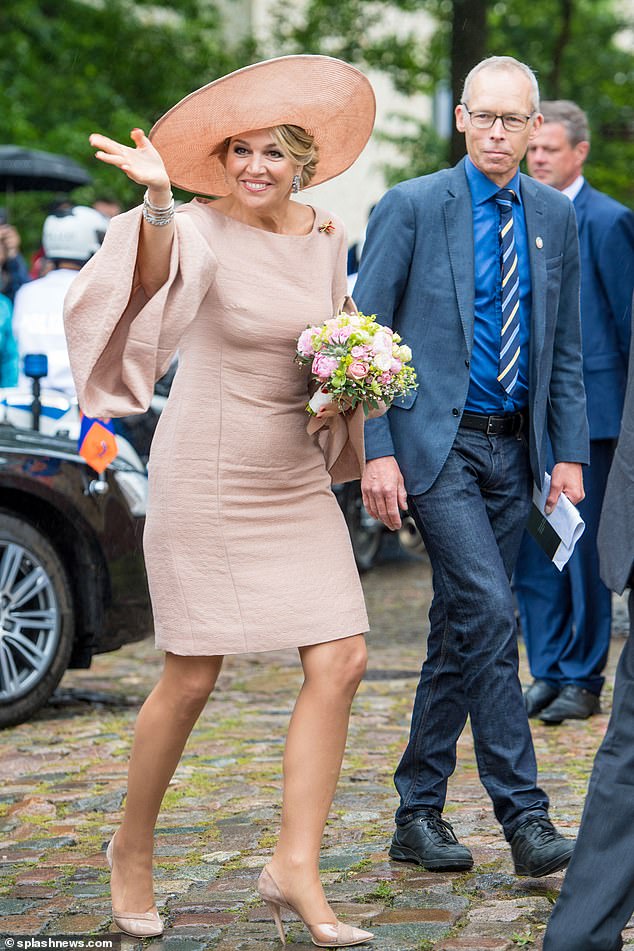 Bold outfit! Maxima (pictured) looked gorgeous in a blush pink dress with puffed sleeves and a large and statement hat

There, she signed the institution's Golden Book in presence of King Willem-Alexander and Dietmar Woidke (SPD), Prime Minister of Brandenburg and his wife Susanne.

Later on, the couple visited a film set at the Babelsberg film studio, also located in Potsdam.

They will attend more engagements at the Wissenschaftspark Albert Einstein and at the Media Tech Hub Potsdam, before a special lunch at Schloss Sanssouci.

This concludes Willem-Alexander and Maxima's time in Germany. Their visit aimed to focus on the economic relations between the German and Dutch. 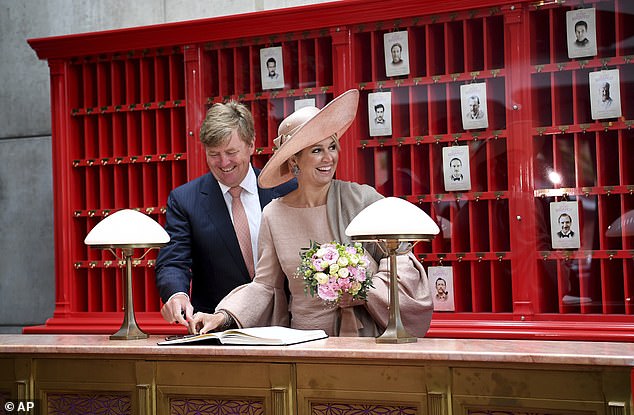 King Willem-Alexander, 52, and Queen Maxima of the Netherlands visit a film set at the Babelsberg film studios in Potsdam (pictured) 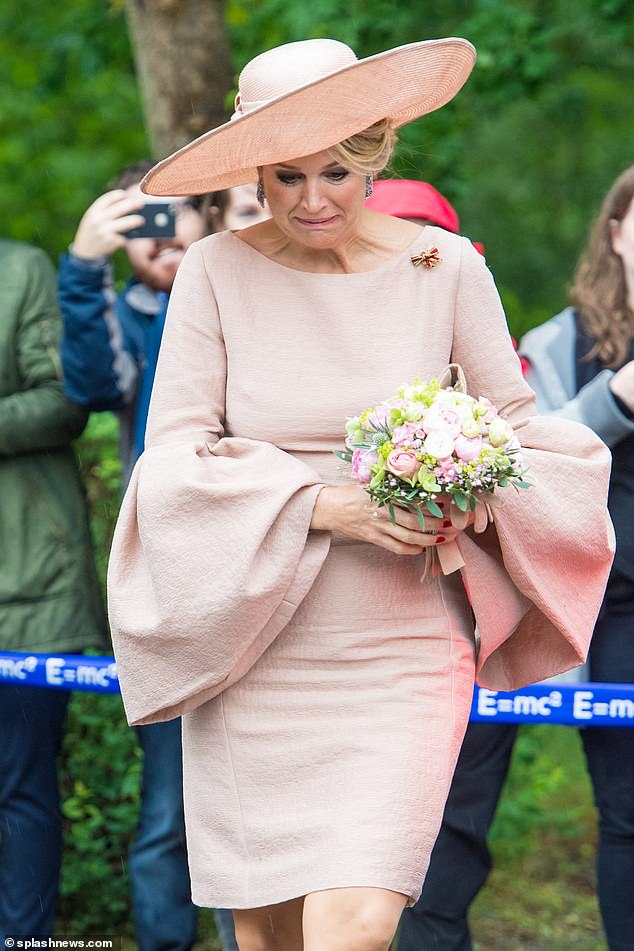 Making a statement! Maxima made sure she stood out from the crowd in a blush pink dress with oversized sleeves 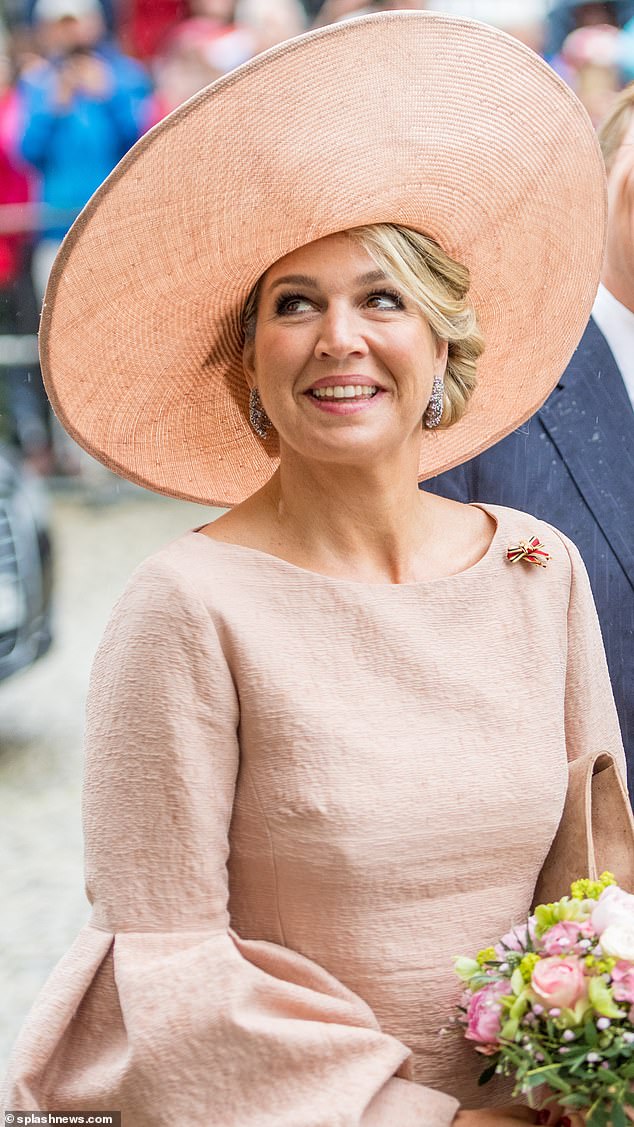 Maxima beamed in her blush pink number (pictured). As always, her blond locks were styled in a sleek do, covered by the impressive hat

On Monday, the Dutch couple were offered a lunch by the Prime Minister before King Willem-Alexander gave a speech at Schwerin Castle on the importance of working together and building on the Hanze period.

He said: 'Mecklenburg-Vorpommern and the Netherlands are not direct neighbors. But we are connected for many centuries.

'What has grown during the Hanze time is still visible. We recognize something in each other: entrepreneurial spirit, the will to cooperate. That recognition makes our band so strong,' he added. 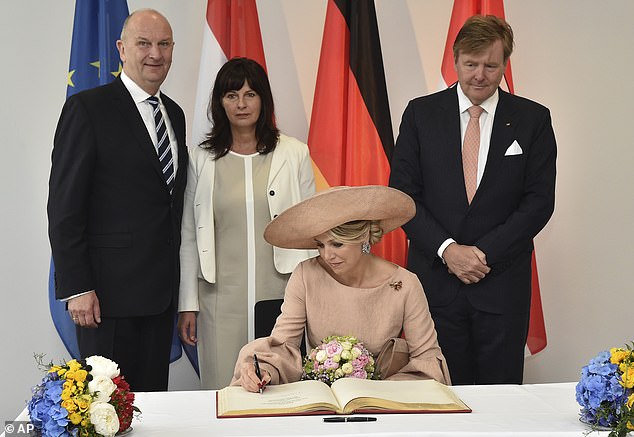 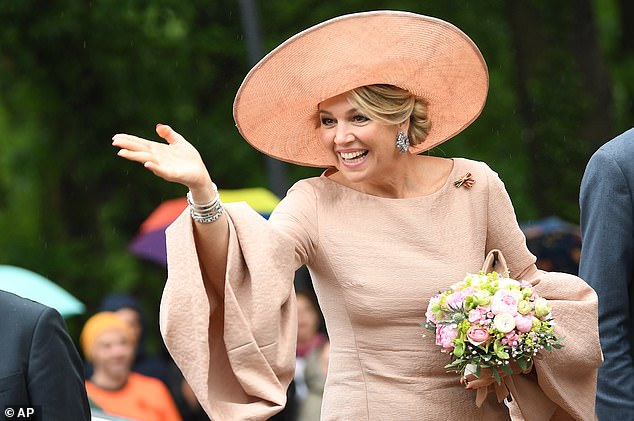 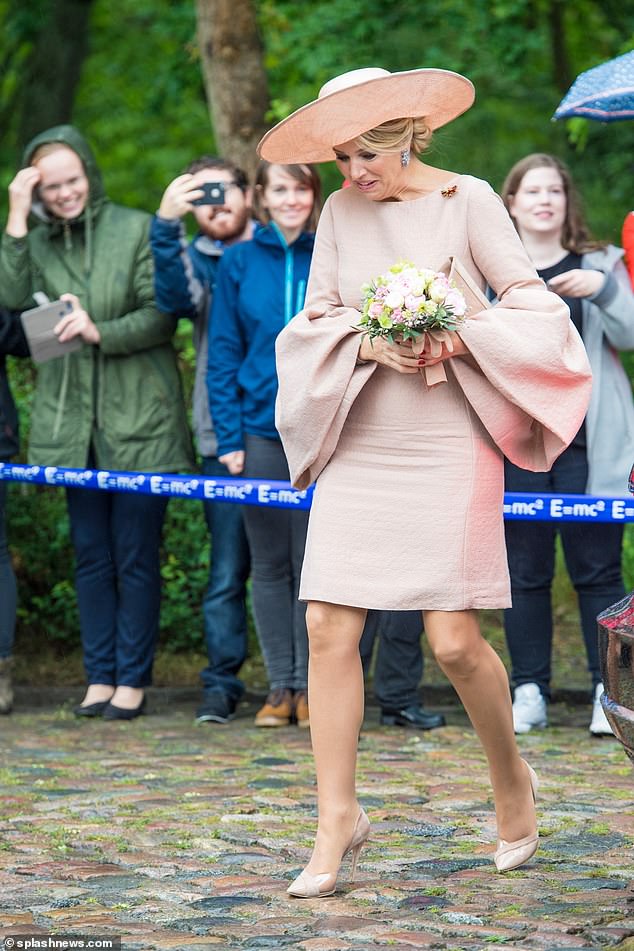 Maxima (pictured) made sure not to fall as she braved the chancellery's pavement, still wet from a previous rainy episode

'....The history that we share since the Hanze period is alive. We are happy to add a new chapter with our visit, believing that many more beautiful things will follow.'

The Dutch royals attended a trade dinner at the Kurhaus in Warnemünde on Monday with attendees from the maritime trade mission and those specializing in coastal protection and agriculture.

Their busy visit also included a visit to a trip to arable farm in Nauen on Tuesday, and it will conclude later today with a lunch at Schloss Sanssouci.