Ramen in Amstelveen: ISHII – worth the bike ride?

Regular readers will know I rarely leave Amsterdam except to go to Schiphol Airport. But

Regular readers will know I rarely leave Amsterdam except to go to Schiphol Airport. But I’d heard on the tonkotsu-vine that some of the best Japanese restaurants are to be found in Amstelveen – not least because it has the highest Japanese population in the Netherlands. On my birthday, the sun was shining and ramen was calling – so I decided to make the bike trek out to Amstelveen and see what there was to eat.

Not having much else to go on, I turned to social media to advise me on my choice of restaurant and ended up at ISHII: a simple Japanese cafe that seemed to be popular with the nearby office crowd out on their lunchbreaks. ISHII’s ramen menu is particularly educational, as they provide you with a map that shows the different styles of ramen and where they all come from. Did you know, for example, that miso ramen comes from Hokkaido, while tantan men comes from Tokyo? Or that tonkotsu ramen is made differently in different cities? Seemed like a good excuse to order a beer and do some research… 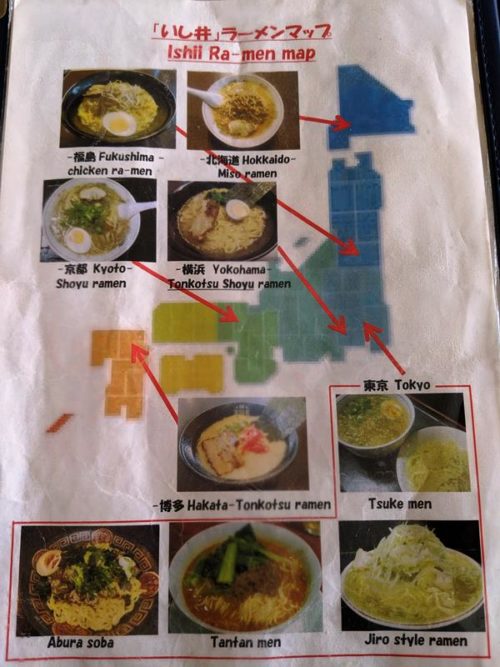 ISHII’s handy guide to the geography of Japanese ramen types

Eventually, I settled on the tantan men for lunch, which had a creamy broth that was rich in sesame but not as spicy as other tantan men broths I’ve eaten elsewhere. The noodles were the thin style (which, from a previous ramen experience at Hakata Senpachi in Amsterdam, I remember are favoured by most Japanese diners, while the Europeans tend to prefer the thicker ramen noodles). At the time I agreed with the Europeans – and my noodles at ISHII didn’t change my mind. The toppings were a little scant: minced pork, which had a good meaty flavour, and a small strip of pak choi. That was it: no marinated egg, no seaweed, nothing else. Of course, I could’ve ordered those things separately, but they would’ve added a lot to the price – and for €13 I felt there should’ve been more to the dish to begin with. The tantan men at ISHII, washed down with an Asahi beer

With a small beer, I got out of ISHII for €16.50. But while my belly was full and my ramen craving sated, I couldn’t escape the feeling that it was a bit of a waste of a bike ride when you can eat more interesting ramen in Amsterdam. Still, at least I could justify the calories after all that pedalling…