One of Africa’s best-known artists has made an impassioned appeal for governments and communities across the continent to preserve their traditions and culture in the face of globalisation.

Esther Mahlangu, 85, said that she was worried that young people in Africa were losing a sense of their roots.

One of Africa’s best-known artists has made an impassioned appeal for governments and communities across the continent to preserve their traditions and culture in the face of globalisation.

Esther Mahlangu, 85, said that she was worried that young people in Africa were losing a sense of their roots.

Mahlangu’s pioneering use of the crafts of her Ndebele people of south-eastern Africa has brought her huge success on the world’s art markets, shown and sold from Australia to New York, and she continues to travel and exhibit widely. Her work has been seen by millions of people on British Airway planes, vodka bottles and billboards.

Musicians including Usher, Alicia Keys and John Legend as well as Oprah Winfrey are among collectors.

Born in 1935 on a farm in Middelburg, a small town in the South African province of Mpumalanga, Mahlangu learned to paint at the age of 10, taught by her mother and grandmother. 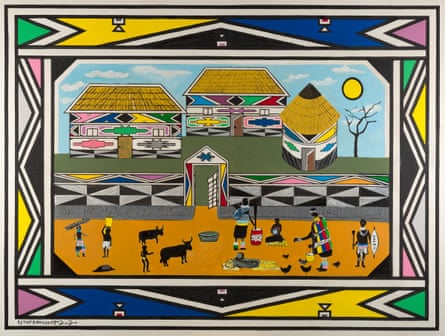 Traditionally, Ndebele women painted colourful geometric patterns on the outside of their homes, often representing important events such as weddings.

“She was the first person to reimagine Ndebele designs on different platforms. She has been painting now for 70 years and has had a major impact globally. Ninety-five percent of her work is with international collectors,” said Craig Mark, the director of the Melrose Gallery in Johannesburg, where Mahlangu has a rare solo show this month.

“For a long time she was seen in South Africa as a traditional Ndebele artist. It is only recently that she has been recognised here for her real importance as a global contemporary artist … She is almost a global pop icon brand in her own right,” Mark said. 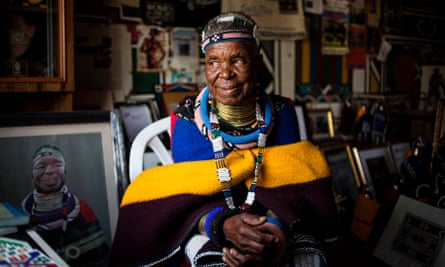 After years working in provincial cultural museums in South Africa under the repressive and racist apartheid regime, Mahlangu’s breakthrough came when her work was shown in Paris at the Pompidou Centre in 1989. Two years later she was commissioned to repaint a BMW car in Germany. Accolades and honours have piled up ever since. She has represented South Africa overseas as a cultural ambassador, and received commissions varying from the inside of the Market Theatre in Johannesburg to the interior décor for a Rolls-Royce Phantom.

Art from across the African continent has enjoyed a surge of international interest in recent years, with works newly visible in art shows, featured in the specialist media and sought after by major institutions. 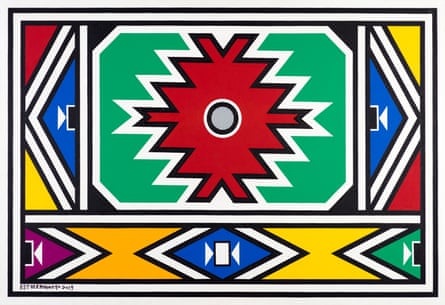 The boom has fuelled a wave of new institution. In Cape Town, on one of the world’s most recognisable waterfronts, a vast new art museum, the biggest ever in Africa, opened in 2017. The Zeitz Museum of Contemporary Art Africa has already been described as “Africa’s Tate Modern”. There are also new museums in Marrakech and Lagos.

But there is limited public funding for artists or the cultural sector from governments, and the Covid-19 pandemic has reduced support for artists still further.

Mahlangu returns frequently to her home in Mpumalanga where she has founded a school where girls and young women from the local community are taught to paint in the traditional way. 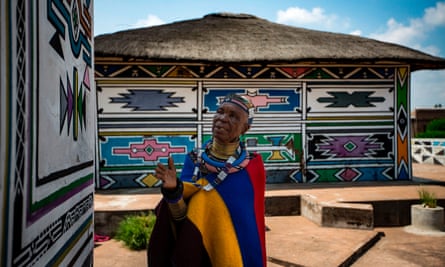 “I have taught them and I love to do that. But there should be more support for artists from governments. They need to promote African art and culture around the world. That would be a very good thing. That way it won’t vanish,” she said.

Mahlangu, who always appears in public in traditional Ndebele clothes and jewellery, said that she intended to carry on working and travelling despite her age.

“All the cities I visit, I love them all equally. I am going to carry on working and going around the world,” she said.