Riley Hawkins '16 to Teach in the Netherlands with Fulbright Award 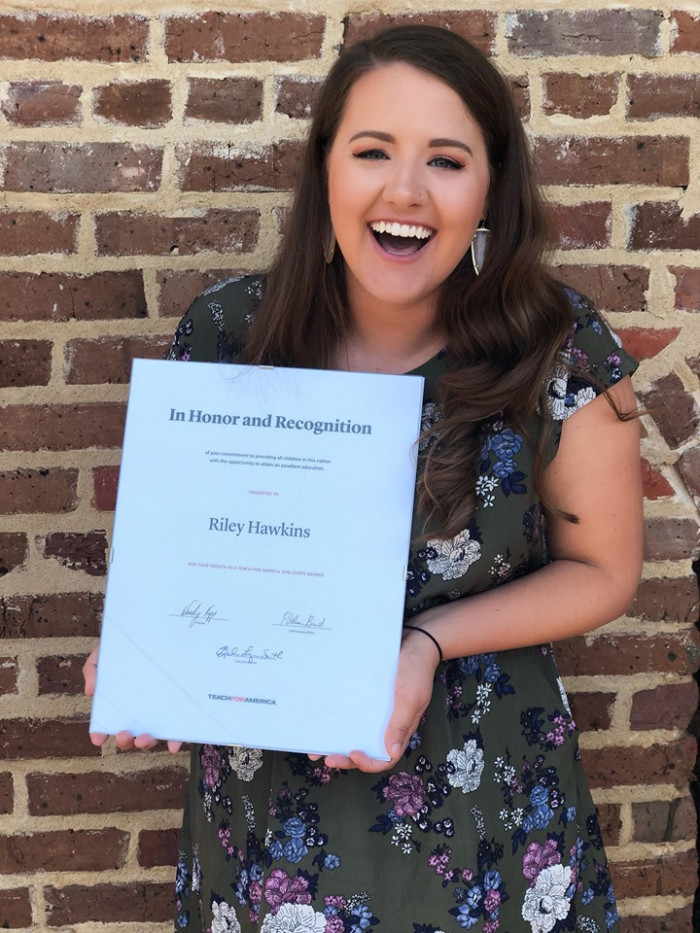 Riley Hawkins, a 2016 graduate of DePauw University, will spend the upcoming academic year teaching in the Netherlands as a result of being awarded an English Teaching Assistantship (ETA) from the Fulbright U.S. Student Program.

A program of the U.S. Department of State, the Fulbright U.S. Student Program is funded by an annual appropriation from the U.S. Congress to the Bureau of Educational and Cultural Affairs, and supported in its implementation by the Institute of International Education. Recipients of Fulbright grants are selected on the basis of academic or professional achievement, as well as demonstrated leadership potential in their fields.

Hawkins becomes the sixth member of the DePauw community to be announced as recipients of Fulbright awards for the 2019-20 academic year.  Her classmate, Conner Gordon '16, has been awarded a Fulbright U.S. Student scholarship and will spend the upcoming academic year conducting research in Serbia. Four current DePauw seniors have also received ETA's: Liam Byrnes will travel to Thailand, Blake Nelson will go to Germany, Italy will be the destination for Bo Shimmin, while Peper Langhout will teach in India.

A biology major and Honor Scholar, Hawkins spent a semester studying in Edinburgh, Scotland. She joined Teach For America after graduating from DePauw, teaching biology, zoology and ACT Prep at Greenville High School in the Mississippi Delta. Following her tenure with Teach for America, Hawkins led a fifth grade social studies classroom in St. Louis with KIPP Charter network.

While in the Netherlands Hawkins plans to initiate a peer mentoring program for at-risk students, aimed at developing socioemotional health and leadership skills.

“Students need to be comprehensively supported to be truly successful, and creating a situation where they work with their colleagues will lead to a more robust, empathetic community,” she states. “I am eager to refine my

teaching capabilities in an international context while gaining insight into how the Dutch education system supports its students for vocational and academic success. My time in Mississippi and St. Louis convinced me that the U.S. must emphasize lifting under-served students out of poverty and provide alternative avenues in accomplishing this essential goal.”

After she returns to the United States, Hawkins will enter the public policy arena. She hopes to tackle educational inequity by crafting policy that focuses on students’ holistic development in addition to academics, and bolstering vocational opportunities for students unable to pursue post-secondary education.

“Helping kids is my life’s calling and I relish the chance to project a positive impression of my country as an ambassador while also serving children. I am excited to immerse myself in Dutch best practices and leverage them in the U.S. to disrupt intergenerational poverty and support students overcoming trauma.”

The Fulbright Program is the flagship international educational exchange program sponsored by the U.S. government. It awards approximately 8,000 grants annually in more than 160 countries worldwide. More than 390,000 individuals have participated in the program since its inception.

leading colleges in producing winners of Fulbright scholarships by the Chronicle of Higher Education. Based on data from the 2018-19 academic year, DePauw, with seven Fulbright recipients, is Indiana's top liberal arts college in the listing of "Institutions Producing the Most Fulbright Students: Bachelor's Institutions" and is tied for #9 in the nation. It's the twelfth time in the last 13 years that DePauw has been listed among the American colleges and universities that produce the most Fulbright Scholars.

DePauw students and alumni who are interested in applying for Fulbright Awards may contact Ashley Puzzo, assistant professor of philosophy and interim director of student awards and fellowships.

DePauw University ranks seventh among the nation's four-year baccalaureate colleges for the number of students who receive academic credit for studying abroad (494), according to the 2018 Open Doors® Report on International Educational Exchange. DePauw has consistently been among the Open Doors' leading colleges for more than a decade.  Read more here.